Richard Evelyn Byrd held the title Rear Admiral in the U.S. Navy. He claimed the first North Pole flight in 1926. A year later, he flew non-stop across the Atlantic. He made that trans-Atlantic flight less than two months after Charles Lindbergh’s celebrated trans-Atlantic flight. Making clear that he could fly anywhere, Byrd flew over the South Pole in 1929. This Byrd subsequently received the U.S. Medal of Honor.

A statue of Byrd stands across from the main gate for Arlington National Cemetery. The base of the statue declares: “UPON THE BRIGHT GLOBE HE CARVED HIS SIGNATURE OF COURAGE.” Byrd’s head was recently despoiled with considerable bird excrement. 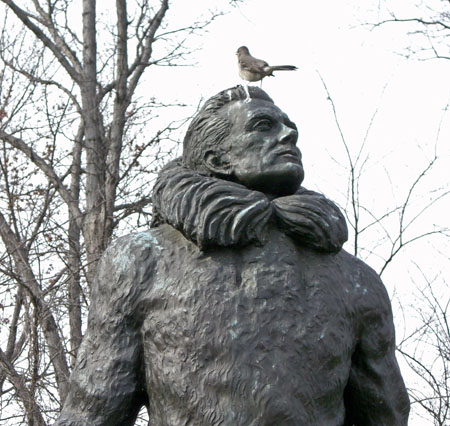 Post-modern thinkers like to think that human beings make the world with their representations. But don’t be deluded. To a bird, a statue of Byrd is just another rock.