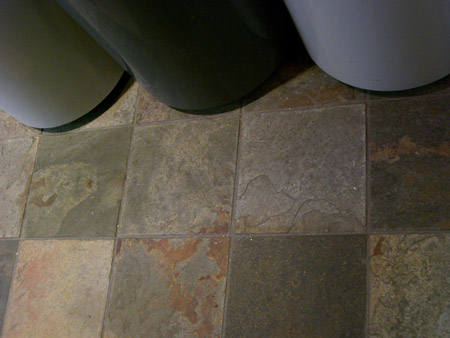 Art collections and art exhibitions tend to focus on things that can be collected and moved — artifacts.  Yet digital technologies and the Internet make particular human creative efforts potentially available to everyone, everywhere.  Unlimited Edition, a juried show that opened on December 12 at the Arlington Arts Center, highlights “works that explore mass production, marketing, and commodification.”[*] The show poignantly displays economic, social, and environmental circumstances of creative production and circulation.  It’s one of the best modern art shows this year in Arlington, a must-see show for everyone interested in art and society.  Admission is free.

Unlimited Edition‘s most impressive aspect is best appreciated on a sunny afternoon when few other persons are there.  Just inside the main entrance, in a near frame of monumental wooden stairways, one looks up to see in the middle of the raised main hall Cynthia Connolly’s Bicycle Postcard Rack.  It’s positioned like an ornate fountain in a stately, historical building. The deep, narrow view behind the sculpture leads through a bright, double-frame with a fringe of outdoor brick to end in a baroque, sun-yellow stained-glass portal.  No mere photograph could capture the effect of being there.  No other art exhibition could integrate place, history, and human creativity like this. 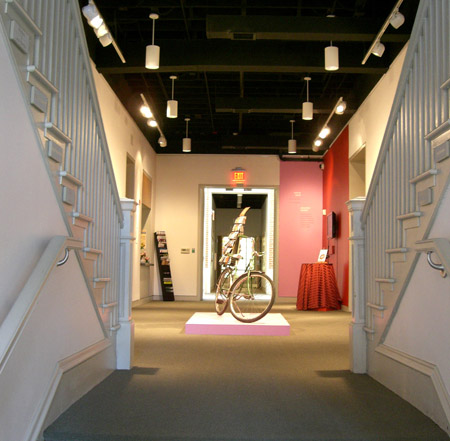 In striking contrast, Alexis Granwell’s and Josh Rodenberg’s solo exhibitions in rooms off the main hall lack radiance.  The two small rooms, with dull-white, newly painted walls and grey, institutional carpet, overwhelm the formal contrasts between Granwell’s and Rodenberg’s works.  The rooms diffuse to those works a common sense of cheap construction and clutter.  A cold, glossy, high-ceilinged space would have shown much different art.

Susana Raab’s photographs in Unlimited Edition display the familiar bizarreness of human interests and entertainments.  My favorite among these photographs is entitled The Unfortunate Result of the Demise of the Public Phone Booth.  This photo shows a man in a Superman costume stepping out of a portable toilet.  With head turned ninety degrees to his direction of step, he looks directly at the camera taking his picture.  By the way, Arlington County possesses one of the few remaining public phone booths in the greater D.C. metro area. I enjoy collecting photographs of phone booths, and I would like to add The Unfortunate Result of the Demise of the Public Phone Booth to the humorous section of my collection.  But Raab is limiting copies of her photograph to fifteen and selling them for $800 each.  I can’t afford to spend that much for a copy of an image.

Krista Birnbaum’s digital prints of weeds and garbage are magnificent.  Trash Pile with Weeds is a monumental print that conveys depth of space and time.  Happy Meal Wallpaper arranges weeds and garbage like a classical Chinese landscape.  I can think of no better advertisement for McDonalds than falsely believing that more Happy Meal detritus would generate more such landscapes.

Other works in Unlimited Edition address more conventional interests.  Carolina Mayorga’s Leeps-teek seems to me overwrought, as does use of lipstick in general.  Christine Bailey’s series of untitled black-and-white photocopies reminds me of bureaucratic work.  Joannie Turbek wraps for mailing pieces of porcelain birthday cake for her work, The Good Friend Project.  She apparently was swapping the site of her project when I attended the gallery.  She snatched away my naive enthusiasm for a rust-etched metal table top by authoritatively informing me that it was not part of the exhibition. 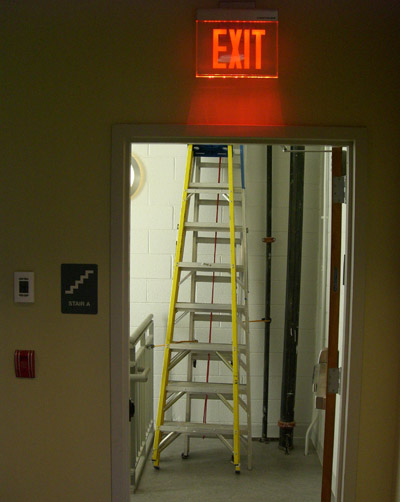 The most conceptually challenging work in Unlimited Edition is Kathryn Cornelius’s ReDOIT.  Cornelius’s work offers reflexive artistic critique and subtle but daring social commentary.  I missed the opening-night performance in which she, present in the Chairman’s Gallery via webcam, executed in her studio instructions persons interested in her work sent to her via Twitter, email, and through an on-site keyboard.  The day after her performance, the Chairman’s Gallery showed just two large, dead, wall-mounted screens separated in the corner by a dead keyboard.  This work provides an unsettling expression of digital art.  The unlimited editions of our electronic age are as transient as its power supply.

Unlimited Edition, juried by Kriston Capps, Martin Irvine, and Welmoed Laanstra, is at the Arlington Arts Center through January 17, 2009.