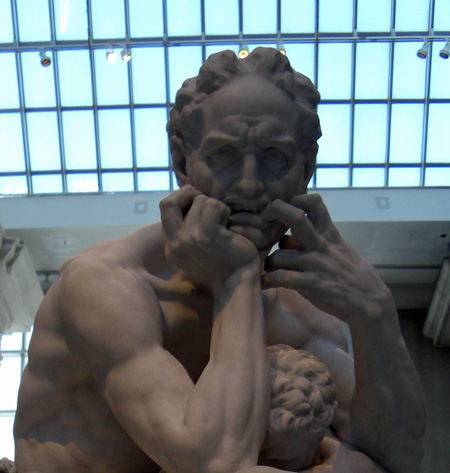 John M. Kang’s article, “The Burdens of Manliness,” recently published in the Harvard Journal of Law and Gender, displays well burdens of manliness among elite academics.  The conclusion begins:

We are justifiably well aware of the myriad injuries that men have inflicted upon women as a group.  Without ignoring the importance of acknowledging such injuries, I have sought to argue in this Article that men have also been subject to forms of discrimination because of their gender.

Are you also well aware of the myriad gifts men have bestowed upon women?  How is acknowledging men’s past gifts and injuries to women relevant to considering today sexist selective service registration, sexism in reproductive rights and in legal imposition of parental obligations, or sexist attitudes toward life-span and occupational hazards disparities?

Admitting fear isn’t necessary.  Your fear screams out between the lines of your article, from the note attached to your name to the beginning of your conclusion. You are deeply justified in fearing that you, as a man, are communicatively vulnerable.

Communicative fear, like any other fear, is a bodily condition of real, specific, evolved human nature.  In the U.S. today, the word of law, resting on authorized state violence, forcibly confines in jail or prison about two million men, ten times as many men as women. No man’s physical strength and courage offers protection against the law’s violent force. But acknowledging the importance of violence under law is deliberatively unpropitious for academic lawyers, at least once the initial thrill is gone.

This ideal of manliness {“manliness that celebrates violence, militarism, and an obsessive refusal to admit fear”}, with the support of the law, has unduly burdened men’s right of self-definition, a right that I have argued is protected by the Equal Protection Clause.

Persons who aren’t academic lawyers won’t appreciate the subtle legal reasoning that connects a misandristic ideal of manliness to an abstract, disembodied “right of self-definition.”  But every man today understands the burdens and fears that this article displays.

The quotes above are from Kang (2010), p. 477. Law students, scholars, and practitioners have been negligent in understanding legal gender bias. An influential law review article declared in lofty abstractions:

Legal interpretation takes place in a field of pain and death. This is true in several senses. Legal interpretive acts signal and occasion the imposition of violence upon others: A judge articulates her understanding of a text, and as a result, somebody loses his freedom, his property, his children, even his life. Interpretations in law constitute justifications for violence which has already occurred or which is about to occur. … Neither legal interpretation nor the violence it occasions may be properly understood apart from each other.

[image] Detail of sculpture, Ugolino and His Sons, by Jean-Baptiste Carpeaux (1865-67), held at the Metropolitan Museum of Art, NY. According to Dante’s Inferno (canto 33), Pisan traitor Ugolino della Gherardesca was imprisoned with his sons and had to choose between starvation and cannibalism.