The creation of humans in the biblical book of Genesis represents belief in the unity of male and female.  That unity is represented in the ambiguous linguistic status and use of Adam.  Adam in ancient Hebrew means a person made from earth.  Adam was not simply a proper male name.  God created Adam man, “he created him, male and female he created them,” and God expelled him-them from the Garden of Eden.[1]  The unity of male and female is represented in Genesis’s poetic structure of Adam’s enveloping love for “this one,” a power like oneself alongside of oneself.[2] 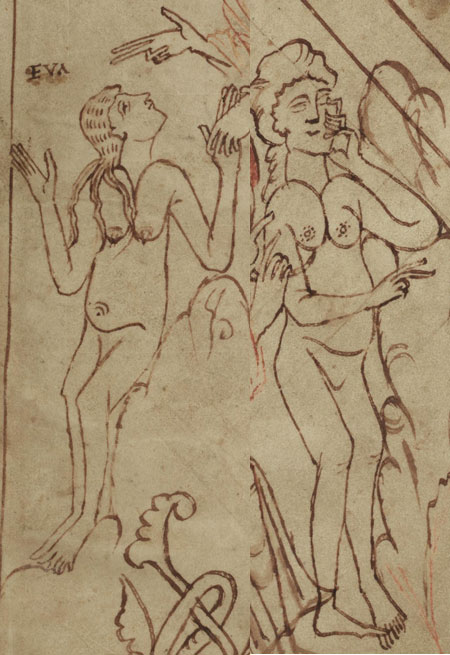 Within Genesis, men and women are equally persons of God’s creation.  To Christians, sex differences are a sign of women and men being made for each other.

[1] Genesis 1:27, 3:24 (God “drove out the man”).  Images of the expulsion from the Garden of Eden always show Adam and Eve being expelled.  In the fourth century, Jerome of Stridon explicitly recognized the Adam meant man and woman:

Let us read the beginning of Genesis, and we will find Adam, that is man, so declared to be both male and female.

[images] (1) The marble female figure is Early Cycladic II, Chaladriania type, ca. 2300-2200 BGC and is on display at the Metropolitan Museum of Art of New York (accession 1977.187.11).  The Met advances art education and culture in part by allowing visitors to photograph items on display in the museum. (2) Adam and Eve in Junius Manuscript. Oxford University’s Bodleian Library has made a digital image of the Junius manuscript (MS. Junius 11) available on the web.  Making this important artifact of human cultural heritage written more than a millennium ago accessible world-wide is commendable and wonderful.  Universities and libraries are commonly thought to seek to promote education and universal access to informative and cultural work.  Oxford University’s Bodleian Library website for the Junius manuscript includes, however, an elaborate and restrictive statement of copyright over the digital reproductions of that manuscript.  Wikipedia, which has quickly become an enormously influential educational institution, includes reproductions of images from the Junius manuscript.  The official position of the Wikimedia Foundation is that “faithful reproductions of two-dimensional public domain works of art are public domain, and that claims to the contrary represent an assault on the very concept of a public domain.” I have transformed an image from the Bodleian’s reproduction for the non-commercial, critical, and educational use above.

One thought on “Adam & Eve: biblical unity of male and female across millennia”