April 15, 2012, was the centennial of the sinking of the Titanic.  Coincidentally, five days before that centennial, two authors posted online a working paper, “Every man for himself: Gender, Norms and Survival in Maritime Disasters.”  The next day their employer described that working paper in a press release entitled “Titanic is an Exception among Disasters at Sea.” By the next day, the Associated Press (AP) was distributing this news under the title “Researchers: Titanic was an exception, male {sic} chivalry on sinking ships is ‘a myth’.”  The Washington Post, the NY Daily News, the Globe and Mail (Toronto, Canada), and other leading news sources ran the AP article on that same day.  By the centennial of the Titanic’s sinking, about 300 online news sources from Malta to India to Australia were running this news.

In reporting this news, major news organizations mislead their readers, presented absurd statements, and furthered grotesque sexism.  The news stories reported that “two Swedish researchers … economists Mikael Elinder and Oscar Erixon of Uppsala University” did an “82-page study.”  That “study” was the working paper posted online five days before the Titanic’s centennial.  The main text of the working paper spans six pages.  The news reports described the working paper as if it were objective, authoritative scholarly research. To encourage readers to remain ignorant of its credibility, none of the news stories linked to the working paper.  News reports thus presented as scholarly research what would be better understood as a tendentious media gambit.

Recognizing grave weaknesses in the story of the working paper / press release should not have been beyond the capabilities of a professional journalist.  For example, the press release states:

It is expected that the crew should rescue passengers, but our results show that captains and crew are more likely to survive than passengers.

That’s a non sequitur.  Consider the relationship between the two independent clauses.  Is it necessary for the captain and crew to be more likely to die in order for them to work to rescue passengers?  Try to think of any other factors besides helping passengers that would be relevant to the differential survival of the captain and crew (hint: experience at sea and swimming ability).  The bottom of the news report includes a quote from a ship captain making this obvious point. The news story presents the captain’s statement merely as another viewpoint, rather than as reasoning that seriously undermines the value of paying any attention to the working-paper’s “findings.”

The news article presented statistics to impress and factually dominate the reader, but not statistics that usefully and accurately inform.  See if you notice a problem with these two statistical statements from the news article:

These statistics make no sense.  How could a share of the persons who died have survived?  The above first sentence of statistical gibberish apparently is based on these sentences in the working paper:

Table 2 reports tests of each of the 6 hypotheses conducted in separate regressions, as well as together in one regression. We find that the survival rate of women is 16.7 percentage points lower than, or about half of (17.8% vs. 34.5%), that of men.[1]

Here a survival rate is described as a percentage apparently related to hypotheses tested in regressions.  The meaningfulness of those numbers depend on a vast array of other assumptions and specifications in the working paper’s analysis.  Most of those assumptions were not statistically supported.  In short, the working paper is also filled with statistical gibberish.[2]

Nearly twice as many males died on the sinking ships as did females. That fact points to sex-differentiated exposure to risk.  Women have been shielded from significant risks to which men are subject.  For example, in contrast to wide-ranging efforts to promote gender equity in the workplace, men still predominate in the most dangerous jobs.  In the U.S. in 2006, the dead person in 92% of workplace fatalities was a man.  Among U.S. soldiers on active duty in 2008, men outnumbered women by about six to one.  Among U.S. soldiers killed in Iraq, men outnumbered women about forty-two to one.

On the ships where the captain gave the order ‘women and children first’, the difference in survival rates between men and women is lower. But women survived to a higher extent than men only when this order was enforced by the threat of violence.

This indicates an important role of leaders in the face of disasters. It is, however, unusual for captains to give such an order. [4]

The European Union was explicitly founded as a society in which “non-discrimination … and equality between women and men prevail.”[5]  Uppsala University in Sweden seems to support leaders threatening violence against men to uphold sex discrimination against men on sinking ships.  Underscoring its commitment to sexism and anti-male bigotry, the working paper’s title describes not privileging women and children as “every man for himself.”

In ordinary circumstances, men tend to accept their disposibility without protest.  That’s modern chivalry.  The communicative success of the Uppsala University working paper testifies to the enduring significance of such chivalry.

Universities and major media can help to guide societies to the secure shores of justice and truth.  Many today, especially in Europe, are now far out at sea.  Don’t follow an inhumane and untruthful order into the blue void.  Seek your own saving way! 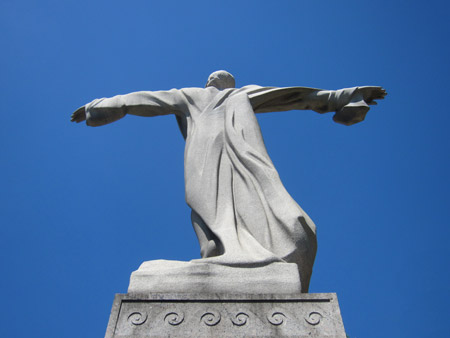 [2] The quality of the statistical work in Elinder & Erixson (2012) appears to me to be so low as to not merit attention. Its hypothesis are laughably ill-formed, its framework of hypothesis testing is not credible (do you really believe that those hypotheses were formulated independent of the data? What does that imply for the interpretation of statistical tests?), the results are incompletely reported, the data have not been posted, the model forms chosen are not well justified and tested, etc.  The main value of Elinder & Erixson (2012) is to intimidate untrained readers and obscure simple facts.  While Elinder & Erixson (2012) has not undergone peer review, many peer-review publications present false results.  The institutional problems that Begley & Ellis (2012) identify in preclinical cancer research are even worse in economic research.

[3] The data in Elinder & Erixson (2012) do not consistently distinguish adults and children.  Because the number of young children is probably relatively small, males and females are reasonable proxies for men and women.

Most notably, we find that it seems as if {sic} it is the policy of the captain, rather than the moral sentiments of men, that determines if women are given preferential treatment in shipwrecks. This suggests an important role for leaders in disasters.

Elinder, Mikael and Oscar Erixson. 2012.  “Every man for himself: Gender, Norms and Survival in Maritime Disasters.” Uppsala Universitet, Department of Economics, Working Paper 2012:8.

Update:  The Proceedings of the National Academy of Sciences of the United States of America (PNAS) received the paper for review on May 2, 2012, approved it on June 29, 2012, and published it on July 30, 2012.  It was published as Elinder, Mikael and Oscar Erixson. 2012. “Gender, social norms, and survival in maritime disasters.”  doi:10.1073/pnas.1207156109  The publication in PNAS generated another round of coverage in major news sources.  While the second round of press reporting seems to have avoided obvious statistical blunders, the reporting provided no critical perspective on the article’s claims.

The peer review of the paper did little to improve it.  The criticisms above still apply.  PNAS published online a supporting dataset with the article.  The organization of the dataset, which shows no regard for informative data structure, is further reason to doubt the article’s tendentious statistical analysis.

Here’s an example of the article’s scientific veneer:

Note the technical-normative babble “compliance with the WCF norm” and “the norm has not been upheld.”  The actual issue is whether passengers and crew valued women’s lives and children’s lives above men’s lives.  This paper strives to make that gender inequality into a norm for which society demands compliance.  In the historical shipwreck sample, men are likely to differ significantly from women in sea-survival skills and physical capabilities.  With regard to isolating the quantitative extent to which men helping women affects men’s and women’s differential survival, the article offers little actual quantitative evidence.  Instead, the article states: “if we observe a substantial survival disadvantage of women we regard it as evidence…”  The observed facts aren’t actually evidence of the authors’ claim; the authors merely “regard it as evidence.” I regard this article as evidence that junk statistical work, if appropriately tendentious, gets published quickly in PNAS.