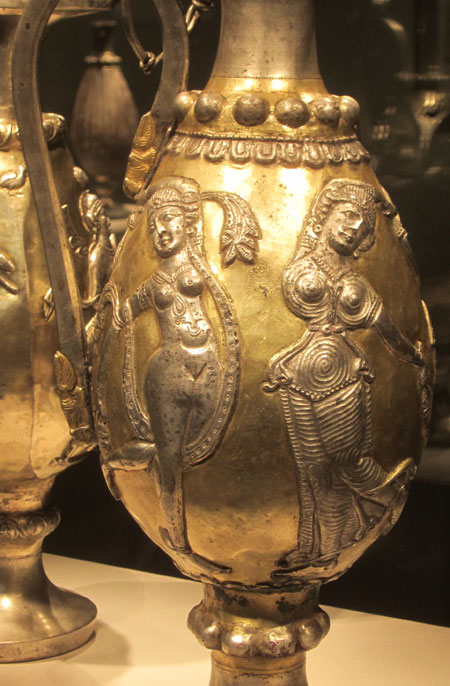 Love poetry in the seventh-century Islamic world divided into urban (courtly) and desert (Bedouin) types.  While both courtly and Bedouin love poetry flourished in the Hejaz region encompassing Mecca and Medina on the western edge of the Arabian peninsula, the types contrasted thematically:

Arab writers on the subject regarded this urban love poetry as lecherous, or, at its best, as realistic.  It spoke of many loves, of illicit adventures, of great amatory activity.  The second type was chaste, pure and tender, and concentrated on one beloved.  Writers on the subject saw the difference as resulting from the contrast between city and desert life,the first merry, affluent, with easy access to slave girls; the second poor, sad, helpless and dominated by the virtuous spirit enjoined by Islam. [1]

From the seventh to the eighth centuries, political leadership shifted from Hejaz and the Umayyids to Baghdad and the Abbasids.  Nonetheless, the thematic division between courtly and Bedouin love poetry was still in play in late-eighth-century Baghdad.

An under-appreciated figure in re-imagining courtly and Bedouin love poetry is ‘Abd al-Malik ibn Qurayb al-Asma’i.  Al-Asma’i (d. 783) was a philologist.  He both wrote books on animals and produced anthologies and studies of Arabic poetry across its history.  Al-Asma’i had fine manners and graceful speech.  He was a close companion of Abbasid Caliph Harun al-Rashid in Baghdad.  Historically, al-Asma’i is known as an exemplar of adab.  Adab in the Abbasid caliphate meant urbane cultural sophistication understood in contrast to the primitive culture of the Bedouin.[2]

While an exemplar of courtly sophistication, al-Asma’i emphasized the simple physical act of sexual intercourse.  A thirteen-century Islamic jurist preserved a conversation that al-Asma’i recounted:

I said to a Bedouin woman:  “What do you consider love to be among you?” “Hugging, embracing, winks, and conversation,” she replied.  Then she asked, “How is it among you, city-dweller?” “He sits amid her four members and presses her to the limit,” I answered.  “Nephew,” she cried, “this is no lover, but a man seeking a child!” [3]

In the Thousand and One Nights, al-Asma’i appears in a story as the judge in a poetry contest among three young women of Basra.  The women compose couplets of sexual longing.  Al-Asma’i chooses as the winner the poem that describes the physical consummation of sexual longing.  Explaining to Caliph al-Rashid that choice, al-Asma’i explains that the winning love poem was the poem closest to real life.[4]  Nonetheless, al-Asma’i was no crude roué.  Perhaps he was as culturally sophisticated as the renowned Roman poet Ovid.

No one is safe in this world.  Such doings are going on in my kingdom, and in my very palace. … There is not a single chaste woman anywhere on the entire face of the earth. [5]

The King’s lament obliterates the early Islamic division of love poetry.  The chaste desert Bedouin no longer exists.[6] Among sophisticated scholars of poetry and exemplars of adab, the alternative to conventional courtly love poetry had become the reality of sex.[7]

al-Asma’i was one of the first to treat pre-Islamic poetry as a corpus to be collected and edited: his personal anthology of early examples, known as al-Asma’iyyat, shows him confronting the growing problem of the unreliability of transmitters (see rawi).  In subsequent literary history he has become the ideal speaker of Arabic, combining the merits of complete orthodox piety with the forthright simplicity of the Bedouin, symbolically reconciling the new religion with its pagan linguistic roots.

The subsequent discussion above suggests that this characterization significantly under-estimates al-Asma’i’s cultural sophistication.

The expression “shu’abiha ‘l-arba'” (lit., “her four branches”) was understood variously by Muslim scholars to mean: her arms and legs, her thighs and shanks, her labia majora and minora, or her legs and labia majora.

Al-Washsha (d. 936), in his Kitab al-Muwashsha,  transforms this story into didactic verse:

To love is to kiss, to touch hand or arm
or to send letters whose spells are stronger than witchcraft.
Love is nothing but this; when lovers sleep together, love perishes.
The unchaste are only interested in having children.

This story is contained in the Egyptian manuscripts and most of the early printed editions.  It is also quoted in Ibn al-Sarray’s (d. 1106) Masari’ al-‘ushsaq and al-Itlidi’s (seventeenth century) I’lam al-nas. {references omitted}

{al-Tawhīdī} comments on the romantization of love in the good old days and attributes its decline in part to the excessive sensuality of the present generation and in part to the disillusionment with the Bedouin among whom the poets had been wont to place their romantic lovers.

As for refined love — let others claim it.
May God, instead, give me contentment:
Kisses, embraces, and the rest.
(If you ask any further, you prove yourself nosey.)