Iconomachy, a battle over the authoritative status of icons, occurred in the Byzantine Empire from the mid-eighth to the mid-ninth centuries.  Icons are figural paintings that, in the sense of the believer, function as media for sacred communication and action.  Historical accounts created after Byzantine affirmation of icons present Byzantine iconomachy as an irruption of iconoclasm within an well-established practice of venerating icons.

Recent scholarship asserts that venerating icons was not a well-established Byzantine practice before Byzantine iconomachy.  Compared to relics and pilgrimages, icons provided a scalable, cost-effective means for extraordinary contact with God.  Recent scholarship argues that Christian veneration of icons largely began about 680 in response to Islamic successes and Byzantine failures.  According to that view, Byzantine empowering of icons in response to Islam led to elite political conflicts and Byzantine iconomachy.  The traditional history of Byzantine iconoclasm is interpreted as merely the winning icon-supporters’ construction of a threatened tradition of icon veneration.[1]

Despite this recent scholarship, good evidence and reason exists for believing that Christians widely venerated icons prior to Islam.  Early in the eleventh century, the Muslim scholar al-Biruni was far from any constructed Byzantine tradition of icon veneration.  Al-Biruni lived in Central Asia and did not read Greek.[2]  As a pious Muslim, al-Biruni abhorred idols.  Practices like venerating icons al-Biruni described as “foul and pernicious abuse” among “common, uneducated persons”; justifying those practices were “mad raving” and “ludicrous views.”[3]  A Byzantine constructed history of venerating icons would fit neither al-Biruni’s milieu nor his scholarly and religious interests.

When the heathen Arabs had imported into their country idols from Syria, they also worshipped them, hoping that they would intercede for them with God. [4]

Christians lived and prospered in the ancient Islamic world.  However, the statement “heathen Arabs had imported into their country idols from Syria” is inconsistent with a Muslim writer describing Christian Arabs living as dhimmi in an Islamic caliphate.  “Their country,” the country of the “heathen Arabs,” is most plausibly Arabia prior to the Islamic conquest of Arabia.[5]  Early Christians prayed especially to Mary, the mother of Jesus, for intercession with God.  Syria was near the center of early Christianity.  Al-Biruni’s statement, plausibly coming through early Arabic sources, suggests that early Christians in Syria and Arabia venerated Marian icons. The importance of Mary in Arabia at the coming of Islam is consistent with the prominence of Mary in the Qur’an.[6]

that idols are only memorials, was also held by the Caliph Mu’awiya {reigned 661 to 680} regarding the idols of Sicily.  When, in the summer of A.H. 53 {675}, Sicily was conquered {other sources date the conquest to 652}, and the conquerors sent him golden idols adorned with crowns and diamonds which had been captured there, he ordered them to be sent to Sind {India}, that they should be sold there to the princes of the country [7]

Historical records aren’t entirely consistent about the date of the brief Muslim conquest of seventh-century Sicily, but all are before 680.[8]  The First Council of Ephesus of the Christian Church in 431 declared Mary to be “Mother of God.”  That title naturally led to the Marian title “Queen of Heaven.”[9]  The captured “golden idols adorned with crowns and diamonds” are most plausibly Marian figural statues that were objects of lavish veneration.  Such statues occupied well-known destinations for pilgrimages in medieval western Europe.[10]

Between 608 and 630, the Ka’ba in Mecca contained images of Jesus and Mary. After being destroyed in a fire in 608, the Ka’ba was rebuilt. The ninth-century historian al-Azraqi, whose family had lived in Mecca for hundreds of years, conveyed reports of images in the rebuilt Ka’ba. These reports indicate that a fresco of Jesus and Mary existed when the Prophet of Islam entered the Ka’ba in 630. One report also described an image that might have been a statue:

Reports conflict on whether the Prophet ordered the images of Jesus and Mary to be destroyed. Those conflicting reports suggest tension about the function of those images.[12]

Other considerations also favor Christian veneration of icons prior to Islam.  Icons typically feature starkness in figural depiction and direct gaze to the viewer.  The hodegetria iconography, which may predate Islam, exemplifies these features.  These iconographic characteristic are associated with sense of presence.  Moreover, extra-representational response to images is common across cultures and throughout history.  In light of that broader evidence, the right prior belief for evaluating how early Christians related to images is that they probably related to them like the ancient Greeks did or like Hindus have for thousands of years.  Convincing evidence that early Christians did not venerate icons is necessary to make that the more probable belief. 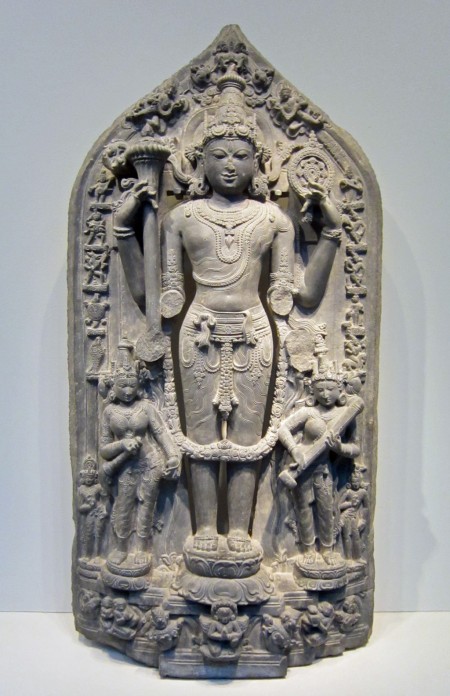 [1] Brubaker & Haldon (2011).  On the new attitude to icons from about 680, see id. pp. 58-60, 777.  Noble (2009) also finds little credible evidence of a cult of images among the Carolingians prior to the Byzantine iconoclasm controversy.  See id. pp. 8, 30, 35, 40-44.  Early Christians attributed mediating power to biblical figures (especially Mary, mother of Jesus, the mediatrix), saints, and marytrs, as well as to relics associated with those persons.  One type of relic was an image not made by human hands, such as an image of the face of Jesus thought to have been created through contact with Jesus.  The technical term for such images are acheiropoieta.  Three acheiropoieta are attested to have existed in the second half of the sixth century  Brubaker & Haldon (2011) p. 35.  Icons, in contrast to acheiropoieta, are human-made images with mediating power.

Incidental references to icons or figurative painting and mosaics are not common in Monophysite literature up to the end of the Iconoclast period, but the few that there are suggest that no offense was taken of them. …  In all there might be a dozen such references belonging to the sixth to eighth century available in Syriac sources.

[6] The hymn Sub Tuum Praesidium, surviving in a Greek papyrus dated to the third century, shows petitioning to Mary:

Beneath your compassion,
We take refuge, O Mother of God:
do not despise our petitions in time of trouble:
but rescue us from dangers,
only pure, only blessed one.

The Qur’an refers to “worshiping” Mary:

Allah will say:
“O Jesus the son of Mary!
Did you say to men,
“Worship me and my mother
As gods in derogation of Allah?”
He will say, “Glory to You!
Never could I say
What I had no right {to say}

[9] See Council of Ephesus, Second and Third Letters of Cyril to Nestorius, and Twelve Anathemas Proposed by Cyril and accepted by the Council of Ephesus (anathema 1).  Corippus, in 566 in a hymn to the Virgin as guardian of Constantinople, described Mary as “queen of heaven” (excelsi regina poli). See Cameron (1978 ) p. 82.

Daniel, Norman. 1997. Islam and the West: the making of an image. Oxford: Oneworld.