By the early eleventh century, Greco-Roman thought was much more respected and eagerly studied in the Islamic world than was Hindu thought.  One obstacle to Muslims engaging with Hindus was Muslims’ perception that Hindus worshiped idols. In his monumental work on India, early-eleventh-century Muslim scholar al-Biruni described Hindu idolatry as similar to Greco-Roman idolatry.  Greco-Roman idolatry caused little intellectual and religious concern to Muslims.  In al-Biruni’s view, Hindu idolatry likewise should cause little intellectual and religious concern to Muslims.

While both Christians and Muslims were adept at recasting ancient Greeks as proto-coreligionists, al-Biruni showed more respect for the fullness of truth. Al-Biruni described ancient Greek belief in “the First Cause,” which can be analogized to belief in the one God of Islam.  Al-Biruni declared that Plato wrote:

God is in the single number; there are no gods in the plural number.[1]

Nonetheless, al-Biruni also reported that the ancient Greeks believed in spirits that ruled the world in various ways: “they called them gods, built temples in their names and offered them sacrifices.”  According to al-Biruni, Galen, who was the leading medical authority in the ancient Islamic world, described Asclepius and Dionysos as divine beings.  Al-Biruni also transmitted Galen’s story of a stone statue of Hermes.  That stone statue spoke to its maker in a dream and declared, “Now I am no longer a stone.”  Al-Biruni also noted that the ancient Greeks used the word apotheosis “which has a bad sound in the ears of Muslims.”[2]  Greco-Roman non-Christian religion had largely vanished by the time of the coming of Islam.  Greco-Roman idolatry was thus easy for Muslims to ignore.  Al-Biruni, in contrast, described many Greco-Roman beliefs and practices that would offend Muslim beliefs. 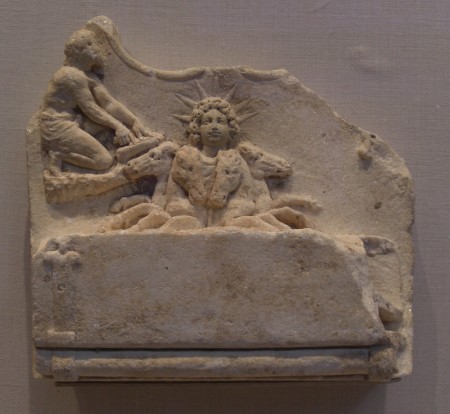 Hindu beliefs and practices, in al-Biruni’s view, were much like those of the ancient Greeks.  Al-Biruni described Hindus as recognizing seven classes of spiritual beings who continually quarrel and fight. They occasionally had intercourse with human beings.  Al-Biruni observed:

If you compare these {Hindu} traditions with those of the Greek regarding their own religion, you will cease to find the Hindu system strange.  We have already mentioned that they called the angels gods.  Now consider their stories about Zeus, and you will understand the truth of our remark. … {Zeus} married certain women one after the other, doing violence to them and not marrying them, among them Europa, the daughter of Phoenix, who was taken from him by Asterios, king of Crete.  [3]

Those stories attribute to Zeus “anthropomorphisms and traits of animal life.”  Moreover, according to al-Biruni, “Brahman {apparently meaning a Hindu god} is described in the same way as Zeus by Aratos {Aratus}.”[4]  Al-Biruni’s accounts of Hindu gods and Greeks gods aren’t coherent.  But al-Biruni’s primary point is that both Hinduism and ancient Greek religion fall short of Islam in similar ways.

The educated among the Hindus abhor anthropomorphisms of this kind, but the crowd and the members of the single sects use them most extensively. They go even beyond all we have hitherto mentioned, so as to speak of wife, son, daughter, of the rendering pregnant and other physical processes, all in connection with God. They are even so little pious, that, when speaking of these things, they do not even abstain from silly and unbecoming language. However, nobody minds these classes and their theories, though they be numerous. The main and most essential point of the Hindu world of thought is that which the Brahmans think and believe, for they are specially trained for preserving and maintaining their religion. [5]

Indian elite texts described in detail the construction of idols.  In al-Biruni’s view, these texts illustrate “how the crowd is kept in thraldom by all kinds of priestly tricks and deceits.”  Al-Biruni reported that these elite tactics had great effects:

When the ignorant crowd get a piece of good luck by accident or something at which they had aimed, and when with this some of the preconcerted tricks of the priests are brought into connection, the darkness in which they live increases vastly, not their intelligence.  They will rush to those figures of idols, maltreating their own figures before them by shedding their own blood and mutilating their own bodies.[6]

Al-Biruni saw economic exploitation of idols and idol-worshiping as preferable to some other alternatives.  When Islamic warriors invaded Sicily in the mid-seventh century, they captured “golden idols adorned with crowns and diamonds.”  The (Muslim) Caliph didn’t destroy the idols.  He ordered the idols to be sent to India to be sold there.  Al-Biruni approvingly observed:

for he thought it best to sell them as objects costing sums of so-and-so many denars, not having the slightest scruple on account of their being objects of abominable idolatry, but simply considering the matter from a political, not from a religious point of view. [7]

Similarly, when Muslims conquered the Indian city Multan about 712, they didn’t destroy Multan’s main Hindu idol, which attracted many visitors and much money.  Instead, the Muslims took a share of ongoing revenue from the idol. About 986, an Ismaili army seized control of Multan in battle among Muslim forces.  The new, Ismaili ruler of Multan destroyed the idol.  Al-Biruni described this new ruler as “the usurper” and approvingly noted that “the blessed Prince Mahmud swept away their rule.”[8]  Al-Biruni seemed to regard economically exploiting an idol to be preferable to destroying it.

Al-Biruni favored ignoring idols intellectually.  Al-Biruni reported ancient Greek devotion to more than one god and ancient Greek use of idols as mediators and embodiments of gods.  Such practices encompassed Plato and Galen, Greco-Roman thinkers highly respected in the Islamic world.[9]  Al-Biruni’s solution to this troubling strand of Greco-Roman thought was Aristotle’s wisdom, taken from legends of Alexander the Great. According to these legends, Alexander the Great sought help from Aristotle in addressing a Brahman’s criticism of Greek idolatry.  Aristotle reportedly answered the Brahman for Alexander:

If you maintain that some Greeks have fabled that the idols speak, that the people offer to them and think them to be spiritual beings, of all this we have no knowledge, and we cannot give a sentence on a subject we do not know.

In these words he {Aristotle} rises high above the class of fools and uneducated people, and he indicates by them that he does not occupy himself with such things.[10]

Al-Biruni wanted Muslim scholars to treat concerns about Hindu idolatry according to Aristotle’s wisdom, and to study Hindu thought as seriously as they studied Greco-Roman thought.

[8] Id. pp. 116-7.  Muhammad ibn al-Qasim was the initial Muslim conqueror of Multan.  According to al-Biruni:

he thought it best to have the idol where it was, but he hung a piece of cow’s-flesh on its neck by way of mockery.

they {Hindus} never desire that a thing which once has been polluted should be purified and thus recovered, as, under ordinary circumstances, if anybody or anything has become unclean, he or it would strive to regain the state of purity.

Id. p 20.  The claim about hanging cow-flesh on the idol may have been a fiction intended to assuage Muslim concern about economically exploiting the idol rather than destroying it.  The ravaging of India by Mahmud of Gazna (“blessed Prince Mahmud”) seems to have generally appalled al-Biruni.  For more on the temple of Multan, see Friedmann (1972).

[10] Trans. Sachau (1910) p. 124.  A Hebrew text written in fourteenth century France — one of the many, different, surviving manuscripts of the Alexander legends — has the Brahman King Dindimus write to Alexander:

We, the Brahmans, do not slaughter sheep and oxen for the glory and honor of the gods. We do not build temples in order to place images and idols of silver and gold in them. We do not do as you do.

Trans. Bonfils & Kazis (1962) p. 140.  Similar to the wisdom that al-Biruni records from Aristotle is part of a fourth-century saying of the desert monk Abba Sopatras:

Do not get involved in discussions about the image.  Although this is not heresy, there is too much ignorance and liking for dispute between the two parties in this matter. It is impossible for a creature to understand the truth of it.

Bonfils, Immanuel ben Jacob, and Israel Joseph Kazis. 1962. The book of the gests of Alexander of Macedon: a mediaeval Hebrew version of the Alexander romance. Cambridge, Mass: Mediaeval Academy of America.