In pre-revolutionary France, an unmarried woman had a privileged position under law to name the father of her child during childbirth.  The pain of childbirth, like the pain of torture, was falsely held to guarantee truthful speaking.  Women’s legal privilege in establishing paternity was summarized in the legal maxim creditur virgini parturienti (“believe the young woman giving birth”).[2]  A man thus named could know either that he might be the biological father, or that he surely was not.  In either case, if the man did not want the legal status of father of that child, he had to make arguments to civil officials to overturn the mother’s assertion of his fatherhood.  Such arguments were unlikely to be successful.  With respect to establishing paternity, women and men were highly unequal under pre-revolutionary French law. 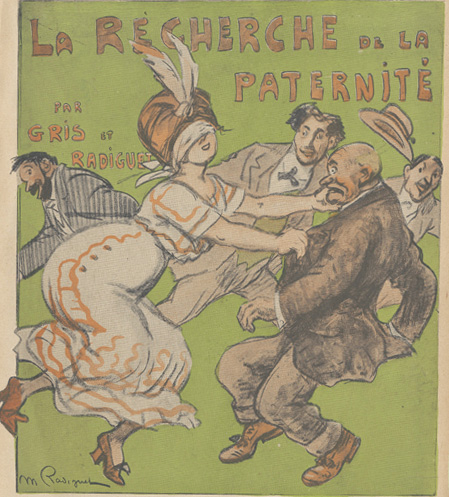 By legally binding fatherhood to a woman’s claim of paternity and depriving men of paternity choice, the Old Regime undermined parental love.  The Old Regime used an unwanted legal declaration of paternity as punishment for a man judged to have seduced a woman, even if that distinctly male criminal act occurred with the woman’s enthusiastic participation.  Men are highly unusual among mammalian males in being attached to and providing for their biological children.[3]  Men’s paternal care did not evolve through the development of a coercive state police apparatus.  The love of a father can only be a freely given gift.  Legal regimes that do not allow space for that gift and that love are deeply oppressive.

Using paternity as punishment for men allowed the Old Regime to avoid effectively facing collective responsibility for poor children.  Leading French liberal thinker Benjamin Constant highlighted the importance of active liberty: “an active and constant participation in collective power.”  Constant opposed involuntary legal fatherhood and favored paternity choice.[4]  Legally imposing upon a particular man unwanted financial responsibility for a child required much less citizen activity than providing for that children through an effective collective system for ensuring the welfare of poor children.  The private approach also created more welfare inequality among children.  Under the private system, the welfare of the child depended directly on the welfare of the man whom the mother declared to be the child’s father. The richer the man the mother named as father, the more money the mother received, and the higher the welfare of the child likely was.  Modern family law is formally based on the best interests of the child.  Mothers in Old Regime France undoubtedly sought to advance the best interests of the child.[5]  A more collective approach to the best interests of children would better serve ideals of active liberty and welfare equality for children.

Overturning the law of the Old Regime, the French Civil Code of 1804 essentially forbid imposing legal paternity upon a man outside his voluntary consent to marriage.  Getting married established a man as legally the father of his wife’s subsequent children.  Narrow conditions, but relatively reasonable ones in comparative historical perspective, allowed a husband to assert that a child of the marriage was not his child.[6]  Unmarried men were subject neither to a legal presumption of paternity nor to having legal paternity forced upon them through a paternity establishment proceeding (paternity search). Article 340 of the Civil Code of 1804 declared:

Paternity searches are forbidden.  In cases of elopement, when the elopement coincides with the date of conception, interested parties may declare that the man of the eloping pair is the father of the child. [7]

Elopement in this context can be interpreted as the woman and man’s decisive choice to be married, despite social and familial circumstances that otherwise prevented them from formally getting married.  The legal institution of fatherhood in the French Civil Code of 1804 was in general closely tied to the legal institution of marriage.

What happened to the ideals of the French Revolution and paternity choice?  Male magistrates in France found ways to get around Article 340 so as to satisfy female pleaders and to harm other men. Other men gained public attention by speaking out forcefully against paternity choice.  For example, Ernest Legouvé, who won prominence as a mid-nineteenth-century French author and intellectual, positioned himself as a champion of women.  He declared: “There should be a law against seduction.”[8]  Seduction meant male behavior ranging from sweet words to abduction to rape.  For men such as Legouvé, seduction was what other men did to get women.  For women struggling to get more resources from men, seduction was a sexual relationship in which men did not provide women with all that women felt that women deserved.  Male and female leaders exploited deep biases of male and female human nature to extinguish the French Revolution’s principle of paternity choice.

The extent of moralizing and shaming of men in reversing ideals of the French Revolution is nearly impossible to perceive today.  According to leading current scholarly analysis, men simply seeking to have sex are men attempting to “escape the responsibilities of misconduct.”  Article 340 of the French Civil Code of 1804 was “a charter of liberties for men, giving them no incentive to behave honorably or responsibly.” A man who had sex should be required to “behave honorably and pay for his dishonorable deeds.”  The French Revolution ushered in “the age of paternal irresponsibility,” that was then reversed in “the evolution from male legal sexual irresponsibility in the nineteenth century to more legal sexual responsibility in the twentieth century.”  The French Revolution’s rejection of forced fatherhood and embrace of paternity choice was based on “fear of female sexuality” and the belief that women were “not to be trusted.”  The Old Regime’s maxim creditur virgini parturienti (“believe the young woman giving birth”) has been revived and expanded to the maxim creditur mulieri (“believe the woman”).  Nonetheless, early twentieth-century success in reversing the French Revolution’s principle of paternity choice “was still a far cry from having respect for, and confidence in, single mothers.”[9]

The leading scholarly work on the history of paternity in France from the Old Regime to the present makes an outstanding contribution to understanding modern regulation of male sexuality.  The author’s introduction begins thus:

“Why are you writing a book on paternity?” some friends have asked — often adding, somewhat suspiciously: “But I thought you worked on women’s history?” [10]

Those friends need not have feared a scholarly revolution, or even some scholarly innovation.  The author fully embraced her friends’ parochial, misandristic perspective.  The author strenuously engaged in moralizing and shaming of men and single-handedly generated all the quotes in the previous paragraph.  Given this work’s achievement, an H-France Forum featured four lengthy, laudatory reviews of it as well as the author’s response.  These essays, which are freely available on the Internet, deserve an (attempt at) reading, for they uncannily reproduce the literary and intellectual brilliance of Soviet apparatchiks meeting under Brezhnev.  Not surprisingly, the book went on to win the 2009 J. Russell Major Prize from the American Historical Association, the 2009 Frances Richardson Keller-Sierra Prize from the Western Association of Women Historians, and the 2008 Charles E. Smith Award from the European History section of the Southern Historical Association. In 2010, the author was elevated to a Regents’ Professor, “the highest faculty honor awarded at Arizona State University.”

How can one hope for another revolution?

[2] Id. p. 31, Fuchs (2008) p. 23.  A similar procedure was adopted under law in the Massachusetts Bay Colony in 1668.  Hambleton (1998) p. 101.  Given the interests supporting such practices and laws, they probably existed in other jurisdictions as well.  Childbirth, which is a natural process for the human female body, differs substantially from torture.  On early modern understanding of the relation between torture and truth, see Silverman (2001).  Fuchs (2008), p. 2, declares:

Medical science could not determine paternity by blood types until after the mid-twenty-century, and genetic testing came even later.

That’s wrong by about half a century.  In Germany and Austria in 1928, paternity blood tests were used in more than a thousand paternity cases.  In 1930, the Circuit Court of Appeals of Berlin declared that “the probative force of blood-grouping tests could no longer be denied.”  Schoch (1942) pp. 178, 180.  Blood tests were a prominent issue in the widely reported Charlie Chaplin paternity cases in the U.S. in 1944-5.  Paternity has a long history of legal fiction.  Availability of scientific paternity knowledge has had relatively little effect in adjudicating contested paternity and in establishing paternity claims against unmarried men.

[3] In only about 5% of mammalian species are males social bonded to breeding females and directly provision that female and her children.  Lukas & Clutton-Brock (2012).

[4] On Benjamin Constant and active liberty, see Breyer (2004) pp. 3-4.  Constant was an outspoken opponent of even allowing an unmarried mother to choose to have a man’s name inscribed as father, against his choice, on her child’s birth certificate.  Fuchs (2008) pp. 53-4 provides a characteristically biased description of the relevant history.  Jean-Jacques Cambacérès, a moderate within French Revolution leadership, by 1793 regarded legally forced fatherhood as odious and contrary to natural law.  Id. p. 34.

[5] In eighteenth and nineteenth century France, elite discourse had not yet developed sufficiently to suppress socially expressions of concern about women making fraudulent claims:

Jurists were far less likely to take a mother’s word than they were to argue that accepting a mother’s word {stating who the father of her child is} would result in scandals, lies, and extortion.

Id. p. 37.  One reason for not legally privileging women’s paternity claims is that a woman may not truly know who the father of her child is.  That’s the circumstances if the woman has had sex with more than one man in the relevant period.  Shondel v. Mark (2006) apparently is a modern example of such a case.  Here’s some statistics on the extent of paternity ignorance.  Another reason for not privileging women’s paternity claims is that, as late-eighteenth-century French jurists recognized, the woman is a highly interested party with respect to that claim.  Id. p. 52 reports:

They {Revolutionary-era French jurists} therefore no longer countenanced a woman’s word {about who the father of her child was} because, they said, women would lie.

Men lie, but women would never lie.  And if women lie, their lies are justified:

These men {those bad men who said women lie} paid no attention to the possibility that if a woman gave false testimony, it might not be from lack of scruples but from sheer distress.

[6] Under Articles 312-318 of the Code, a married man could contest his paternity of his wife’s child if, between 300 and 180 days before the child’s birth, he was “either, by reason of absence, or by the effect of some accident, under a physical incapability of cohabiting with his wife.”  A claim of a man’s natural impotence, which was historically legally tested through the physiologically absurd and personally degrading practice of observed sexual congress, was explicitly disallowed as a basis for contesting paternity.  On legally testing men’s sexual function through observed sexual congress, see Benedek & Kubinec (1998).

An early nineteenth-century English translation of the French Civil Code of 1804 translates “enlèvement” as “rape” and “ravisseur” as “ravisher.” Fuchs (2008), p. 52, translates those terms as “abduction” and “abductor.”  Id. p. 17 observes:

Eighteenth-century seduction included gifts, sweet words, promises of marriage, and sexual activity.  … Although rapt could include rape, it usually indicated nonviolent seduction against the wishes of a woman’s father.  Writing in 1781, Jean-Francois Fornel, a leading legal authority, distinguished séduction from rapt de séduction: séduction was against the woman alone; rapt de séduction involved a man abducting a young women from her parental home, usually with the avowed intent to marry her without her father’s permission.

The term “elopement” better describes the relevant actions in modern English than does the term “abduction.”  The fluidity between sexual persuasion and rape shows the ease with which men are criminalized.

Benedek, Thomas G., and Janet Kubinec. 1998. “The evaluation of impotence by sexual congress and alternatives thereto in divorce proceedings.” Transactions and Studies of the College of Physicians of Philadelphia. 4: 122-153.