When the Jewish Chinese scholar Ai Tien and the Christian Italian Matteo Ricci met in Beijing in 1605, each mistook the other for a co-religionist.  Ai Tien was a Chinese native from the Jewish community at Kaifeng.  Ricci, a Jesuit missionary priest, had arrived in China in 1583.  Ai Tien told Ricci that the head of his faith (the Chief Rabbi) had twelve sons.  Ricci mis-understood and thought that Ai Tien was speaking of Jesus and the twelve apostles.  At Ricci’s house, Ai Tien mis-identified Ricci’s paintings of John the Baptist and Mary with the baby Jesus as paintings of Jacob, Rebecca, and Esau.

The Kaifeng Jews were not the first Jews living in China.  A Judeo-Persian letter found at Dandan Uiliq in northwest China has been expertly dated to 760.  Hebrew texts of Psalms and prophetic writings found in the Dunhuang caves also date to the eighth century.[5]  In addition, writing sometime before 916, a Muslim merchant reported that about 878 a Chinese rebel (probably Huang Ch’ao) conquered a southern Chinese city close to the seacoast (probably Canton) and “killed 120,000 Moslems, Jews, Christians, and Magians, who lived in this city and became merchants in it.”[6]

Jewish merchants known as Radhanites were active in overland trans-Eurasia trade from 500 to 1000 GC.  The Central Asian Khazars, or at least their leaders, allegedly converted to Judaism in the late eighth or early ninth centuries.[7]  When in the mid-ninth century the Abbasid caliph wanted to investigate the status of the wall holding back Gog and Magog, he chose Sallām at-Turjumānī to head the expedition. Sallām was a name associated with Jews.  Moreover, Sallām was also known as Sallām the Interpreter.  He reportedly knew 30 languages.[8]  The Radhanites were known for proficiency with many languages.  Sallām may have been a Radhanite.  He reportedly traveled to Alexander’s wall in western China about the year 850.

Jews probably were among persons living in south-central Eurasia and traveling to China during the Han Dynasty. The vibrant Jewish community living in the Sassanid Persian Empire created the Babylonian Talmud about 300-500 GC.  Trade opportunities would have prompted Persian merchants, including Jews, to travel to China.  Periodic, intense state persecutions of non-Zoroastrian religions in Sassanid Persia would also have motivated Jews to travel from Persia to the east.  In ancient times, given enough time, Jews and other peoples traversed the great distance between Jerusalem and Beijing. 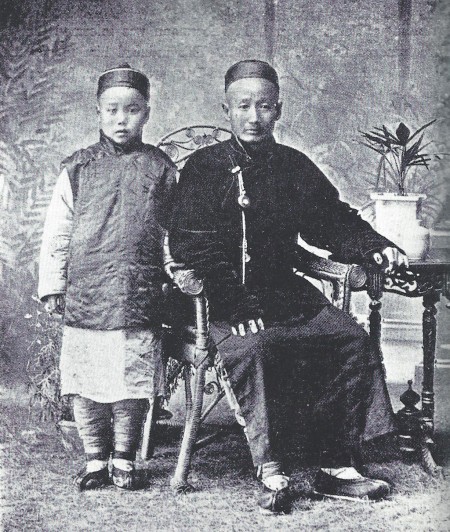 Read more about Kaifeng Jews, with many references and online primary sources, thanks to Jim R. McClanahan.

[1] For the primary source documents in English translation, see Leslie (1972) pp. 31-35.  Such religious mis-identification could and did occur more broadly across China’s diverse and competitive array of religions.

[3] Xin (2003) p. 19.  The Book of Isaiah refers to Jews who “come from far; … from the land of Sinim.”[2]  In Biblical Hebrew, Sinim might refer to China.  Most scholars think, however, that Sinim represents Syene, now known as Aswan and located on the Nile in southern Egypt.

[4] Id. p. 26.  Weisz (2006) is a recent English translation of the inscriptions.  It argues for settlement of Jews in China during the Han Dynasty. Ghostexorcist (Jim R. McClanahan), a highly knowledgeable “paratrooper-turned-college student,” provides an informed review of Weisz’s work and argues strongly that Kaifeng Jews did not enter China during the Han Dynasty.

[7] Gil (2011) reports that tenth-century Arabs and Arabic-speaking Jews eagerly and without good reason adopted the belief that the Khazars converted.  The best medieval Arab historians do not claim that such a conversion occurred.  The legend of the Khazars conversion might be interpreted as imagining a welcoming people for the many Jews making difficult and hazardous journeys across Eurasia.

Leslie, Donald. 1972. The survival of the Chinese Jews: the Jewish community of Kaifeng. Leiden, Netherlands: Brill.