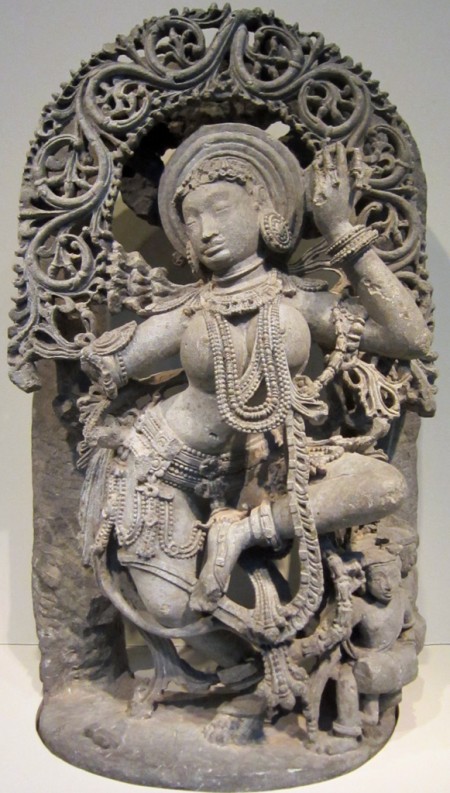 In the eighth-century, the Islamic caliphate controlled a vast territory stretching across Spain, northern Africa, Arabia, Turkey, Iraq, Iran, central Asia, and Afghanistan.  Caliph Yazid II, who reigned from 720 to 724, received everything he desired.  The orders of Caliph Yazid’s wife helped to bring about that result:

One day Yazid’s wife Sa’da said to him: “Commander of the Faithful {Caliph}, is there anything yet in the world that you desire and have not?” He answered: “Yes, ‘Aliya.” Sa’da then privately sent a man to Africa and bought ‘Aliya from her owner for four thousand dinars. When she arrived and had recovered from the fatigue of her journey, Sa’da made her up, and brought her to Yazid’s house, sat her behind a curtain, and again asked him if there was anything in the world that he desired. Yazid, irritated, replied: “You have asked me that already, and I told you.” Sa’da raised the curtain, and said: “Here is ‘Aliya, and she is for you.” Then she got up and left them together. [1]

Yazid’s comment, “You have asked me that already, and I told you,” reflects well-appreciated mundane relational experience.  Less well-known is the rest of Yazid’s domestic story:

Yazid’s happiness was complete. He had complained earlier that the caliphate in itself would never satisfy him without the two girls {Aliya and another slave-girl named Sullamah}. … It was Yazi’s supreme felicity now to be governed by the two girls. Hababah {Yazid’s pet name for Aliya} was the prettier but Sallamah the better singer. Yazid’s affections were fairly divided between the two, favouring first one and then the other in turn. [2]

Yazid focused on wine, women, and song rather than governing the caliphate.  After his half-brother reproved him, Yazid resolved to focus on public affairs.  He stopped seeing his current favorite girl, Hababah {Aliya}.  Seeking to regain control over him, she commissioned a poem and arranged to have the poet sing it to Yazid.  She also sang it to him.  The last three lines of the poem:

In search of heart’s content I’m called a fool, yet know
that I’m not alone in love.
You, if you have have not loved or known what passion is,
Then stay a block of hardest stone.
Cold hearts may scoff and scold; but life is what you love
And gives delight — that’s all. [3]

Yazid turned towards her and said: “You’re right, by God! Damn him who blamed me for you! Boy, go bid Maslamah to lead the prayers.” So he went back to Hababah, and stayed with her, drinking while she sang, and so reverted to his old habits. [4]

Yazid managed to stay away from Hababah for only a week.  Hababah’s personal power, including her polished skills in using poetry and song, enabled her to regain control over Yazid.

Caliph Harun al-Rashid similarly struggled with his foreign slave-girl Marida.  A courtier summoned the poet al-Abbas ibn al-Ahnaf and explained to him:

I must tell you that the girl Marida is just now in power with His Highness, but the two have quarreled; so now she, in the presumption of a favored mistress, refuses to seek for forgiveness; and he, in the majesty of the Caliphate and his royal dignity, also holds back. I have sought to bring about the reconciliation from her direction, but the task has proved too much for me. Now he is the more inclined of the two to rekindle the affection; so compose some verses by way of making this easy for him.

The two lovers have quarreled;
Each feels aggrieved, each nurses anger.
She has turned away in wrath from him, and he from her;
Each is weary of whatever might bring healing.
Return to the loved-ones you have renounced;
The enslaved one {Caliph al-Rashid}, truly should not stand long aloof.
When the estrangement between you has lasted long,
Then indifference creeps in, and the reconciliation sought is hard to reach!
To every lover the time is sure to come
For him to stand ‘twixt strife and dissension sore;
Until, when he feels the quarrel too long drawn out,
He returns, in spite of himself, to his love once more!

In his eagerness to go to Marida and reconcile with her, the Caliph forgot to reward the poet al-Abbas. But a messenger soon brought al-Abbas news of great fortune:

Marida came to meet the Caliph, when she heard of his approach, and said to him: “O Commander of the Faithful, how has this happened? He handed her the poem, saying: “This has brought me to you.” “Who is its author?” she asked; and he replied: “Al-Abbas ibn al-Ahnaf.” “And what have you done for him?” “I have done nothing yet.” “Then,” said she, “I vow I will not sit down until he is rewarded.” So the Amir {Caliph} puts himself at her bidding, and I put myself at his; and they are waiting now with rival eagerness for your coming. [5]

The chain of authority in the caliphate is clear.  The foreign slave-girl Marida is on top.[6]  Al-Abbas received from the Caliph an enormous fortune, thanks to Marida’s power.

No wine twice tinged with musk, no honeyed milk,
No purest water cooled, for me is more
Desired than nectar sucked from Salma’s tongue.
No, never in my life, by God, shall I
Forget the bolted door with me shut out. [7]

Walid imagined himself ravishing Salma, but only gently with the help of God:

May God not yet make me and Salma one?
Does He not do whatever pleases Him?
He’ll bring her out and lay her on the ground
And make her sleep; and, look, her wrap is down!
Then He’ll bring me and lay me down on her,
And waken me; and see, the thing is done!
And God will send on us a bounteous rain
To wash us, and we’ll know no weariness.

Walid’s desire for Salma was not a desire for power and control over her.  Walid declared his utter subjection to Salma:

God let me see you as I see you now,
Salma, in life and at the Judgement Day.
Have you no recompense for him you’ve long
Enslaved, who’d answer every claim you made?
Who, if you died (but do not die!) would die
Himself; or, doomed by Fate to live, would live
In tears. Who, if his every hope were met
In this wide world, would turn to none but you.
Salma! Requite a lover sick with care;
Who, if he tripped, would call no name but yours.
Who, if you told him: Die! — and he could die —
Obedient would taste of death for you. [8]

In this poem, Walid figured Salma like God in the understanding of a pious Muslim.  Walid was not known for godly piety.  Yet he was faithful in his love for Salma.  Perhaps twenty years after falling in love with Salma, Walid became Caliph.  Salma’s husband and Salma’s father then had to acquiesce to Walid’s desire.  Salma received a legal divorce from her husband and married Walid.  Less than forty days after marrying Walid, Salma sickened and died.  Walid grieved deeply.  He neglected his duties as caliph and was assassinated about fourteen months after becoming caliph.[9]

Walid’s elite status did not make him sexually dominant.  After failing to marry Salma, Walid then sought to regain his former wife.  She rejected him.  A court buffoon from whom Walid sought help in securing the women of his desire reported:

One day I went in to Walid. When he saw me he raised his skirt and revealed his weapon at full cock — like a painted ebony flute. “Did you ever see the like of it?” said Walid. “Never, my master,” said I. “Then prostrate yourself,” he said. So I performed three prostrations. “What’s all this?” said he. “I only said once.” “No, master,” said I, “one for the sceptre and one each for the orbs.” At which he laughed and ordered me a reward. [10]

That story surely served as courtly entertainment.  It also suggests that Walid, for all his political power, perceived himself to lack sexual respect.  In courtly social circumstances, caliphs of mighty ancient Islamic empires did not sexually dominate even their foreign slave-girls.

[2] Id.  “Nothing exposed more blatantly Yazid’s incapacity for office than his subjection to women.”  Id. p. 64.

[5] From the Arabic manuscript of el-Ghozuli, trans Torrey (1896) pp. 63-5 (previous three quotes above).  Al-Abbas ibn Al-Ahnaf typically describes love as an overwhelming force enslaving the lover.  In his poetry, “The beloved is placed far above the lover.  She is his sovereign, he is her ‘client’ or ‘slave’; she has magic, even cosmic, faculties.” Meisami & Starkey (1998), entry for al-‘Abbas ibn al-Ahnaf, p. 2.  Al-Abbas was born about 750 and died about 808.

Hamilton, Robert. 1988. Walid and his friends: an Umayyad tragedy. London: Published by Oxford University Press for the Board of the Faculty of Oriental Studies, University of Oxford.