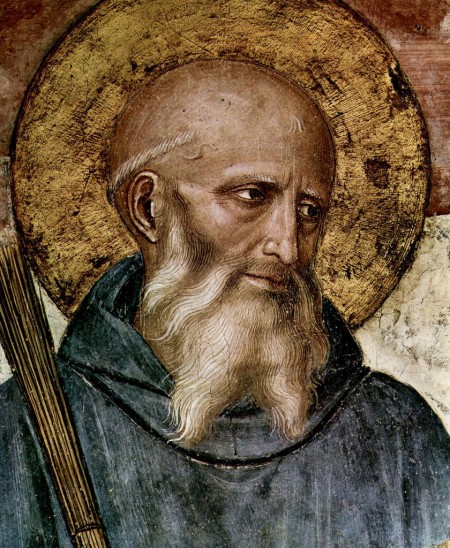 In the Life of Saint Mary the Harlot, Abraham the hermit taught Mary renunciation of fleshly pleasure.  Mary’s father died when Mary was seven years old.  Abraham the hermit, her father’s brother, became her guardian.  For two decades Abraham exemplified, taught, and encouraged Mary in his way of holiness.  Mary then stumbled into sexual sin and became a harlot.  Abraham rescued Mary from a brothel by becoming like one of her brothel customers in all things just up to the point of sex.  Read by Christian monks from no latter than the sixth century, this saintly life shows manly fearlessness in facing the delights of male imagination.

Abraham’s behavior was partly a typological marvel.  Abraham was an old man when Mary lost the way.  Abandoning his hermit’s cell, Abraham put on military garb, pocketed a gold coin, mounted a horse, and galloped off to Mary’s rescue.  The narrator, a man writing for men, interrupts the narrative with a direct address:

Fighting and dying in wars for women has been men’s lot throughout human history.  Abraham the fighter is not distinctively a second Abraham; the fighter for women is a much more general figure of a man.  As a hermit and an old man, the second Abraham is a wholly unrealistic figure of a fighter.  He is a holy fool, like Jesus of Nazareth and Paul of Tarsus.

The narrative of Abraham in the brothel represents reality in the mimetic style of the modern novel.  A tavern and inn fronted the brothel.  Abraham sat in the tavern, anxiously looking for Mary.  When Mary did not appear, Abraham jestingly asked the innkeeper about seeing “a very fine wench” that he heard was there.  Jesting as a cover for anxiety is common among men seeking to pick up women.  The innkeeper responded that Mary was in the house, and that she was “an uncommon handsome lass … in beauty of body was fair, well-nigh beyond aught that nature demandeth.”  Mary was not just a women’s body for a man to use.  In modern language, she was hot.  Abraham and Mary sat together and drank wine:

as they sat and drank their wine, the great old man began to jest with her.  The girl rose and put her arms about his neck, beguiling him with kisses.

Mary suddenly became emotionally anxious and withdrew.  But Abraham comforted her in a typical male way: now, now, don’t worry, let’s be merry.[2]  Abraham paid for Mary and he to have a lavish dinner.  The story continues to develop with modern realism:

the girl began to provoke him to come to her room to lie with her.  “Let us go,” said he.  Coming in, he saw a lofty bed prepared, and straightway sat gaily upon it.

A man of few words, keen for action.

So then, the girl says to him, as he sits on the bed: “Come, sir, let me take off your shoes.” “Lock the door carefully,” said he, “and then take them off.” {Mary demurs, but then obeys} “Come close to me, mistress Mary,” said the old man.  And when she was beside him he took her firmly by the hand as if to kiss her

The narrative continually interjects holy male appreciation for Abraham’s behavior.  The narrative notes that Abraham “checked by force of his manhood the starting tears” when he first caught sight of Mary, dressed in a harlot’s dress, in the brothel.  When Abraham bought a lavish dinner for Mary and himself, the narrator exclaimed:

O wisdom of God! O wise understanding of the spirit! O memorable discretion in salvation!  Throughout fifty years of abstinence he had never tasted bread; and now without a falter eats meat to save a lost soul.

When Abraham went up to Mary’s room and gaily sat on her bed, the narrator ejaculated:

What I shall call thee, O perfect athlete of Christ, I know not.  Shall I say that thou art continent or incontinent, wise or foolish, discreet or reckless?

Abraham was strong and unfaltering, a fearless soldier, a perfect athlete.

The Latin translator of the Life of Saint Mary the Harlot pushed Abraham’s strength to a higher level.  The Life of Saint Mary was originally written in Syriac, with the earliest surviving manuscript dating to the fifth or sixth century.[3]  In both the Syriac original and the Latin translation, Abraham rescued Mary from the brothel.  In the Syriac original Abraham fell to his knees, begging Mary to accept God’s forgiveness for her sins.  Mary responded with gratitude:

“I kiss your holy feet because your compassion stirred you to come after me in order to raise me up from this foul abyss of mine.” Thus she spent the whole night in tears, saying, “How can I repay you, my father, for all that you have done for me?” [4]

“I shall follow your goodness and kiss the track of your feet, you that have so grieved for me, that you would draw me out of this cesspit.”  And laying her head at his feet, she wept all night, saying, “What shall I render to Thee for all this, O Lord my God?”

The devout reader recognizes here a parallel with the Book of Ruth.  In that biblical book, Ruth lay down at the feet of Boaz at night, on the threshing-room floor, after Boaz had enjoyed eating and drinking.  Ruth lay down at Boaz’s feet after she had washed, annointed, and dressed herself in her best clothes.  In Hebrew, feet can be a euphemism for genitals.[5]  Although Ruth apparently exploited sexually the sleeping Boaz, she was not persecuted for rape.[6]  Ruth and Boaz married and had a child.  Abraham, in contrast, chastely rescued and redeemed Mary the Harlot.  By creating an implicit reference to Ruth, the Latin translator underscored Abraham’s manly chastity and the strength of Abraham’s spiritual love for Mary.

While some might judge the Life of Saint Mary the Harlot to be outrageous, treacherous, or scandalous, it belongs with the treasured Gospel story of the prodigal son and the merciful father.  Abraham figures himself as a scapegoat (a figure common across cultures and history in human ethical thought), a merciful father, and a man practicing the way of Christ.  Abraham said to Mary:

Upon me be thy guilt, my daughter: at my hand shall God requite this sin: do but listen to me, and come, let us go home.

it is no new thing to fall in the mire, but it is an evil thing to lie there fallen.  Bravely return again to that place from whence thou camest: the Enemy mocked thee falling, but he shall know thee stronger in thy rising. Have pity, I pray thee, on my old age: grieve for the travail of my white head: rise up, I implore thee, and come with me home. [7]

Abraham did not address Mary as a weak woman, but as a strong, temporarily fallen woman.  She was to him equal personally to a young man, his son.  The translation “fall in the mire” is beautifully subtle.  It surely was not a mistake for “fall into the mire.”  Whether we fall or walk upright, in this world we are in the mire.

Relative to other Christian enculturations, the Syriac spirituality that created the Life of Saint Mary the Harlot emphasized asceticism, virginity, and spiritual marriage to God.[8]  The Life nonetheless shows great appreciation for manly sexual imagination.  The Latin translator appended to the life a personal meditation:

I marvel at myself, beloved, how I daily default, and daily do I repent: I build up for an hour, and an hour overthrows what I have built.  At evening I say, “To-morrow I shall repent”: but when morning comes, joyous I waste the day. … be mindful of me, Lover of men, and lead me out of the prison-house of my sins [9]

[1] Life, Latin text.  trans. Waddell (1936) p. 294.  All subsequent quotes are from that translation, unless otherwise noted.  Id. p. 293 describes Abraham putting “a great hat upon his head, so as to cover this face.”  The Syriac, trans. Brock & Harvey (1998) p. 32, has Abraham wearing a “helmet on his head so that his face was covered.”  Some ancient Greek warriors wore face-covering metal combat helmets.

[2] While the Latin text has Abraham genially coaxing Mary away from thinking about her sins, the Syriac text has Abraham doing so angrily:  “Why do you have to recall your sins now that I’ve come?”  At this point, the Latin revision is more psychological plausible, while the Syriac is more symbolically fraught.

[6] According to a scholarly study, Saint Mary the Harlot was raped, not by Abraham, but by the first monk to seduce her.  See note [3] in this discussion of the anchoress in the Ancrene Wisse.

[7] Return home (nostos) is a central theme in Homer, especially the Odyssey.  For the story of the prodigal son and the merciful father, see Luke 15:11-32.  On the sinful woman washing Jesus’s feet with her tears, see Luke 7:38.

[8] Brock & Harvey (1998), Introduction, pp. 7-9, which cites as nuptial imagery marriage to Christ as the Heavenly Bridegroom.  Ancient Syriac monks referred to God as Lover of Men.

[9] The Syriac source did not include this concluding meditation.

A hermit said about the temptation to lust, “Do you want to be saved?  Go, and discipline yourself, ‘Seek, and ye shall find; knock and it shall be opened to you’ (Matt. 7:7).  In the world there are boxers who are hit hard and yet stand firm and receive crowns.  Sometimes one is set upon by two at once, and their blows gives him strength so that he overcomes them.  Have you not seen what strength exercise brings?  So stand and be strong and the Lord will defeat your enemy for you.”

[11] The Life of St. Mary the Harlot was highly popular in Greek and Latin by the tenth century.  Brock & Harvey (1998) p. 28.  This Life wasn’t included in Jacobus de Voragine’s highly popular thirteenth-century collection of saintly lives, Legenda aurea (Golden Legend).  Perhaps Voragine’s judged parts of it too realistic and too risky.

Waddell, Helen. 1936. The desert fathers; translations from the Latin with an introduction. London: Constable.