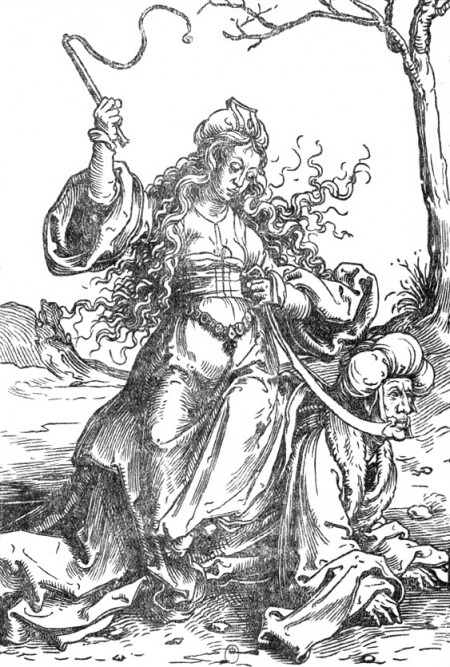 Both male and female historians have tended to suppress the historical record of matriarchy.  Matriarchy is a social system in which men, born and nurtured by women, are then subordinate to their mothers, wives, and female lovers. Matriarchy has dominated human history to the present.[1] The figure of a woman riding a man as if riding a beast has been popular in cultures from India to France for at least the past two millennia. That figure indicates the historical importance of matriarchy.

While the frame story of Panchatantra, Book IV, is an exposition of matriarchy, the enduring figure of matriarchy occurs as a tale within that frame.  The friend, who is a monkey, learned of the crocodile’s plot to kill him.  After having escaped, the monkey told the crocodile a story about a king.  A long time ago, a king ruled the whole world.  The king’s wife got angry with him.  The king responded to his wife:

“Beloved, I cannot live a moment without you.  I will fall at your feet and beg your pardon.”  She said: “If you hold a bit in your mouth and let me climb on your back and drive you, and if, when driven, you neigh like a horse, then I will relent.” [2]

The king obeyed his wife.  He accepted a bridle in his mouth and neighed like a horse while carrying his wife around on his back.  That’s the power of matriarchy.

The matriarchy figure spread across Mesopotamia.  The figure occurs in an early Arabic book doubtfully attributed to al-Jahiz, a leading ninth-century Baghdad intellectual.[3]  A Turkish manuscript in the library of the King of France in 1770 included the matriarchy figure as the centerpiece of a story of a young sultan and his old vizir.[4]  The old vizir chastised the young sultan for spending so much time enjoying the pleasures of the slave women of his seraglio.  After the sultan greatly reduced his time in pleasure with the women, the women protested.  One of the sultan’s slave girls asked to be given to the vizir.  She wanted to demonstrate that he could not resist her power.  The sultan agreed to the transfer.  The vizir soon became enamored of his new slave girl.  Despite the vizir falling to his knees and imploring her, the slave girl treated him severely and refused to have sex with him.  But she offered him a bargain: if he would obey her completely for one day, then she would yield to his passionate desire.  The vizir acquiesced:

“I can refuse you nothing,” replied the old vizir {to the slave girl}; “you shall for ever experience from me an equal complaisance.”

The slave girl used her power over the vizir to create the figure of matriarchy:

“This,” said she to the vizir, “is the criterion of your love; let me see how far your boasted complaisance will go.  You must submit to bear this saddle and bridle, and suffer me to mount upon your back.”

The poor vizir, with half reluctance, half pleasantry, put himself into the posture of a horse, and submitted to the girt and bridle [5]

Not merely a wife, but even a slave girl, can rule a male ruler.

In western Europe, the earliest surviving instance of this matriarchy figure is from an early thirteenth-century fable.  The characters in the fable are Alexander the Great, Aristotle his tutor, and Alexander’s Indian mistress, who is repeatedly described as having blond hair.  Aristotle admonished Alexander to give up his mistress.  Alexander did so for many days, but then surrendered to his desire and returned to his mistress.  The mistress promised Alexander that she would avenge herself on his “pale old tutor”:

His logic and his grammar will do him no good against me.  He will be a skillful fencer indeed if, now that I have made up my mind, Mother Nature does not subdue him through me. [6]

The mistress arose early in the morning and went out into the garden:

dressed in nothing but her shift … in all her figure there was nothing that did not rightly belong there.  And do not think that she had a wimple or band about her head; her beautiful tresses, long and blond, set off her loveliness.  … Barefoot, bareheaded, ungirdled, she went her way, raising the skirts of her tunic and singing

The scholar Aristotle’s thoughts became his desire for the mistress’s body.  The mistress declared to Aristotle:

“Ah, tutor,” she said, “before I yield to your folly, you must, if you are so stricken with love, consent to do a strange thing for me.  For I have been seized with a great desire to ride astride you over the grass in this garden.  And I want you to wear a saddle, for so I shall ride more respectably.”

The old man replied joyfully that he would do that willingly and as one who belonged to her entirely.  The God of Love must really have overwhelmed him to make him carry a palfrey’s saddle on his shoulder into the garden.  You can imagine how mad he looked carrying it.  And she busied herself to put it on his back.  Love can indeed work miracles with an old codger, since Nature so commands, if he can cause the greatest scholar in the world to be saddled like an old nag and crawl on all fours over the grass … He let the girl get up on his back and so he carried her. [7]

The matriarchy figure of a woman riding a man as if he were a beast subsequently became widespread in European literature and art.

Many scholars have confused matriarchy and patriarchy.  The root(ster) of that confusion is male fear of inadequacy in penetration.  Every male ruler has a mother, and most, at least one female lover.  The implication of binary difference is a relation of domination and subordination, like that of hydrogen and oxygen.  Foucault.  Butler.  Increased scholarly appreciation for the social construction of the social construction of gender has engendered  a more fecund gender field of scholarly literature.  An important result has been the development of demasculinized discourse and the installation of new leading metaphor: matriarchy encompasses patriarchy.

If Chaucer has any authority over the scandal of gender difference that this tale exposes, it is of an implicated sort that can only laugh at the absurdity of a system that often works despite its flimsy claims to authority. … each of these performances, because they are revealed to be absurd, demonstrates the ways that men and women collaborate to make fictions of gender convincing. [10]

The rest is silence. 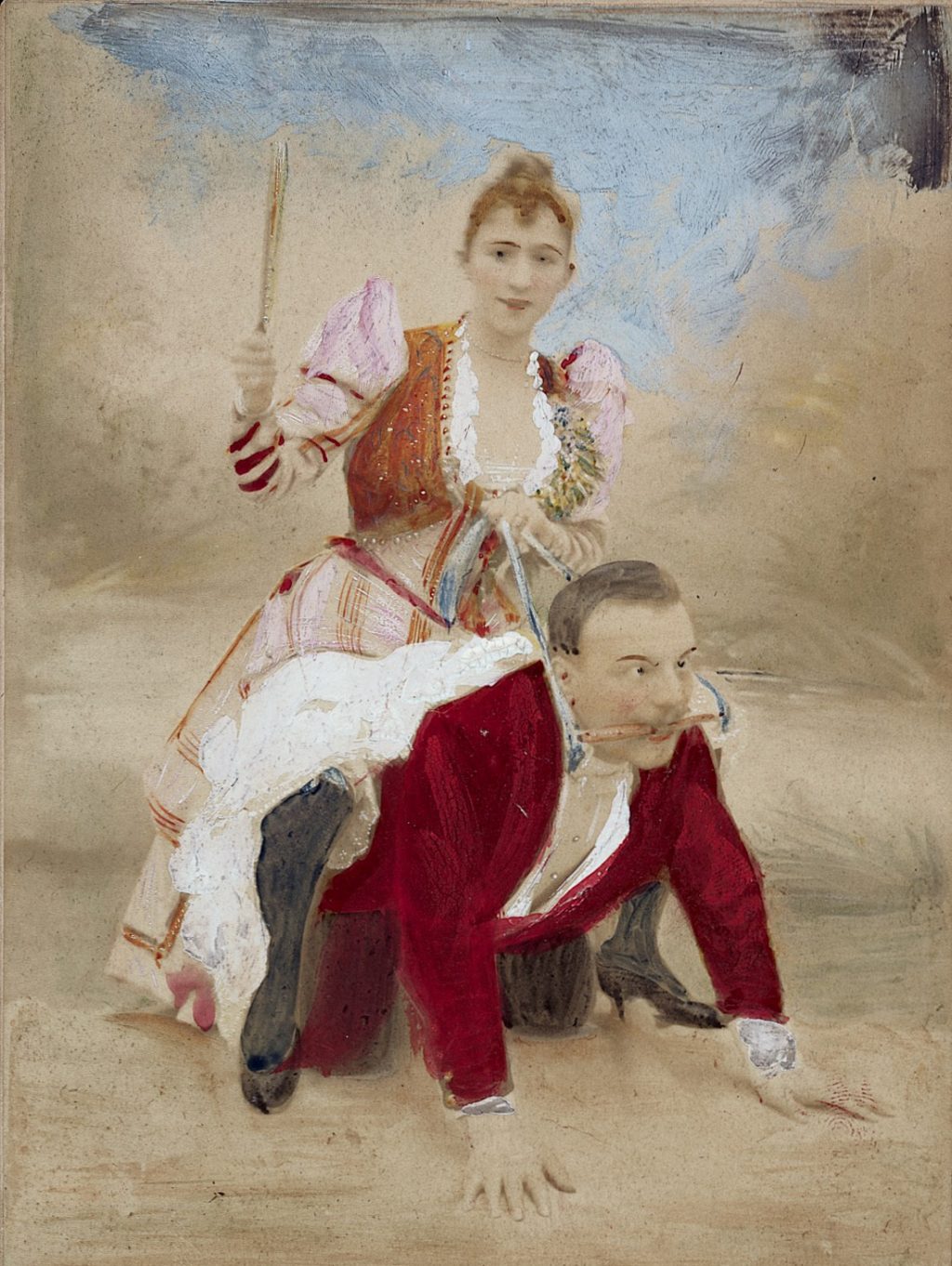 Human society, like other primate societies, is more accurately described as gynocentric. I use the term matriarchy here to refer to women’s social power and control. Medieval European literature highlighted men’s subservience to women. Such subservience in more subtle forms has been prevalent across cultures and throughout history.

[2] Panchatantra, Book IV (“Loss of Gains”), story of “King Joy {Nanda} and Secretary Splendor {Vararuci},” trans. from Sanskrit, Ryder (1925) pp. 408-9.  The actors in the tales of the Panchatantra are predominately animals, but unlike the animals in Aesop’s fables, the animals in the Panchatantra are sex-typed and act like humans.  A surviving eighth-century Arabic translation of the Panchatrantra, known as Kalila Wa-Dimna, includes the frame story (“The Story of the Tortoise and the Ape”), but not the embedded tale with the matriarchy figure of the woman riding on the back of her lover.  See Keith-Falconer (1885) pp. 158-168.  Kalila Wa-Dimna in translation was widely known in medieval western Europe as the Fables of Bidpai.

when the Grand Seignior dies, the slaves, who have had no children by that prince, are married to the grandees of the Porte.

“Porte” most plausibly refers to the Ottoman capital of Constantinople, rather than the major inland cities of Mesopotamia.  Thus I assume that the story is from a Turkish manuscript.

[6] Henri d’Andeli, “The Lay of Aristotle,” trans. from Old French, Hellman & O’Gorman (1965) p. 172.  Johann Herolt (d. 1468), also called Discipulus, included a version as an exemplum in Latin in his Promptuarium Exemplorum and attributed it to Jacques de Vitry (d. 1240).  The story isn’t included in The exempla or illustrative stories from the Sermones Vulgares of Jacques de Vitry.  Here is Herolt’s Latin text and an English translation (with added fairy-tale opening and closing).  A thirteenth-century German version names Alexander’s mistress as “Fillus” (Phyllis).  Sarton (1930) p. 10.  The tale and matriarchy figure became widely known in medieval Europe as “Alexander and Phyllis.” Recent scholarly advances have tended to transform the name to “Phyllis and Alexander.” Matheolus, who was a keen student of the leading medieval writer Marie de France, referred to the story in his Latin Lamentations, Bk. I, ll. 463-503.  Van Hamel (1892) pp. 33-36.  Matheolus includes details, including that of Aristotle with a bridle under his beard, not included in d’Andeli’s tale.  Moreover,  d’Andeli seems to be creating his story in the context of an existing similar story.  He begins by emphasizing that his story is “without scandal or baseness.”  Trans. Hellman & O’Gorman (1965) p. 168. D’Andeli’s repeatedly refers to Alexander’s Indian mistress as having blond hair.  That seems like a pointed contrast.  Moreover, d’Andeli has Alexander declare:

For a man can love only one woman, and truly he cannot please more than one.

Id. p. 170.  That’s a pointed contrast with the western stereotype of eastern men.  Eastern tales seem to have been part of the common culture of learned persons in thirteenth-century France.

[8] Writing from a position of academic prominence about the time of the Great Stock Market Crash of 1929, George Sarton concluded his study of the matriarchy figure:

The candid and ingenious clerk who had the idea seven hundred years ago of bringing an old story up-to-date and giving new zest to it by changing a Muslim vizir into a Greek philosopher, did not do so without a good purpose. He wanted to put his brethren on guard against their greatest peril. This warning is just as timely to-day as it ever was. If the infallible Master failed as ignominiously, any excess of confidence in ourselves is mere foolishness. We must not feel too secure in our virtue, nor ever take our salvation for granted, for we are all the time surrounded by dangerous creatures.

[9] Smith (1995) misinterprets candid representation of men’s subservience to women as “the Power of Women topos.”  That fundamental interpretative error has been prevalent in scholarly work in recent decades.

[10] Crocker (2003) p. 195.  In Chaucer’s The Merchant’s Tale, a wife climbs on her husband’s back to move up into a tree, where she has sex with her lover.  The wife then convinces the husband that his sight of that act was false.  Men’s inferiority in guile was well-recognized in medieval literature.

[images] (1) Woodcut of Lucas van Leyden (1494-1533). Size 41 x 29 cm.  Published in Sarton (1930) and a German journal in 1897.  This woodcut was not originally labeled “Aristotle and Phyllis.”  Id. provides a review of the iconography and five images. (2) Woman riding man. Hand-colored photograph c. 1880s, made into a postcard by A. Block, Le Moulin Rouge, Paris. From the collection of Richard von Krafft-Ebing (1840-1902), professor of psychiatry at Graz and Vienna. Credit: Wellcome Library, London. Wellcome Images images@wellcome.ac.uk http://wellcomeimages.org, preserved as photo number L0028609, library reference Archives and Manuscripts PP/KEB/E/6/5. Via Wikimedia Commons.

Cardonne, Denis Dominique. 1771. A miscellany of eastern learning: translated from Turkish, Arabian, and Persian manuscripts, in the library of the King of France. London: Printed for J. Wilkie … and B. Law (originally published in French in 1770).

Keith-Falconer, I. G. N., ed. and trans. 1885. Kalilah and Dimnah: or, The Fables of Bidpai: being an account of their literary history. Cambridge: University Press.

Smith, Susan L. 1995. The power of women: a topos in medieval art and literature. Philadelphia: University of Pennsylvania Press.