In versions of the Book of Sindibad extant from Spain to Persia about a millennium ago, sages instruct the king with stories of scholars who sought to compile the wiles of women.  Scholars of the wiles of women remained unmarried, and perhaps never even looked at women.  One seated himself upon an ash heap and ate nothing but barley as he copied many books about the wiles of women.  Another worked for forty years compiling women’s lies, excuses, tricks, and contrivances.  The resulting books filled chests that had to be carried upon a camel and were too big to fit into a house.  These scholars became weak and sick with the burden of their scholarly labor.[1] 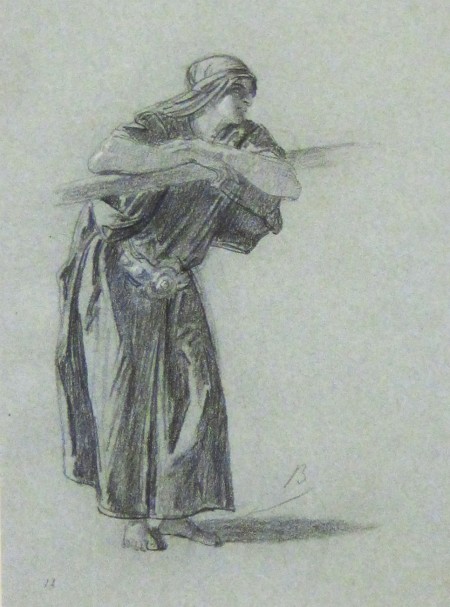 Women showed these scholars that their wearisome scholarly labors were foolish.  One woman considered such a scholar to be a “booby and a simpleton”:

“I firmly believe,” she told him, “that no women in the world will ever deceive you, nor will one ever be the equal of those books you have composed.”  But in her heart she said: “Be as wise as you may, for I shall make you see this stupidity of yours under which you labor.”

The woman told the scholar that her husband was a tired, old man.  She propositioned the scholar:

She began to hug and to kiss him and he arose and got into the bed in order to lie with her.  Then she screamed a tremendous scream.  And her husband came, his men with him.  Then the man dropped like a corpse from fear.

Said she to her husband, “Hey, you brought me a man to feed and as soon as he started eating the food he choked and he could not swallow a thing on account of his illness.  So I screamed as loud as I could because I was afraid he would die. [3]

The husband believed the wife, and no harm came to the scholar.

After this personal, shocking experience of a woman’s double deception, the scholar learned his lesson.  In various versions of the story, he burned his books or washed them out.  He acknowledged, “I have labored in vain.”[4]  In one version, the pain and stress of this new knowledge caused the scholar’s death.[5]  Another version has a happy ending:

He discontinued the investigation of woman’s evil-craft, returned to his native land, and married a wife. [6]

Whether the story ends with the scholar’s death or his marriage, the message is clear: compiling the wiles of women is futile.

Men are inferior to women in guile.  Many men today don’t know (or refuse to acknowledge) their inferiority in guile.  Moreover, some women today, taking the game to a higher level, stridently denounce any claim that men are inferior in guile.  The reality of life is common sense.  Men and women should give more credit to the wiles of women.

[1] In the Book of Sindibad / Seven Sages of Rome corpus, the story is known as Ingenia.  Ingenia occurs only in the eastern Book of Sindibad tradition. Story details above are aggregated from different story versions:  Hebrew versions, Mishle Sendebar, trans. Epstein (1967) pp. 275-283; an Old Spanish version, El libro de los engaños e asayamientos de las mugeres, dated 1253, story 18, trans. Keller (1956) pp. 39-41; a Persian version, text of Mohammad ‘Ali Zahiri Samarqandi, Sendbad-name, written about 1161-1164, story entitled “Story of the Man who compiled a Book on the Wiles of Women,” trans. Clouston (1884) pp. 45-8; and a Greek version, Michael Andreopulos, Syntipas, dated late 11th century,  trans. Clouston (1884) pp. 95-7.  Redondo (2011) argues that Syntipas is not a translation into Greek, but an original Greek text in the style of the second-century Greek of Pausanius.

[2] The book of the wiles and deceptions of women {El libro de los engaños e asayamientos de las mugeres}, story 18, “The Tale of the Young Man Who Did Not Wish to Marry Until He Had Learned All the Evils of Women {Enxemplo del mancebo que non quería casar fasta que sopiese las maldades de las mujeres},” Old Spanish text from Orazi (2006), English translation from Keller (1956) p. 40. With an elaborate rhetorical figure of impossibility (adynaton {ἀδύνατον}), a medieval Latin poem indicated the impossibility of compiling the wiles of women:

Even if a thousand men come, all are likewise deceived,
and just as many women are found to deceive them.
Indeed, all the stars could be counted,
and the tiny ant could equal the elephant,
and more easily the lion be overcome by a grub,
and the flame-spewing dragon be bloodied by a fly,
and a bear be well-chained by a spider’s web,
before all the deceits of women could be enumerated.

[3] Hebrew version (Mishle Sendebar), trans. by Epstein (1967) pp. 281, 283 (modified insubstantially). False accusations of rape have been a motif in world literature throughout history.

[4] Id. p. 283. An Italian work of men’s sexed protest probably from the middle of the thirteenth century summarized:

And a Roman traveled for seven years throughout kingdoms,
writing down the artifices and wiles of women,
until a peasant woman ingeniously tricked him
and made him burn his books in a large fire of wood.

Epstein, Morris. 1967. Tales of Sendebar. An edition and translation of the Hebrew version of the Seven sages, based on unpublished manuscripts. Philadelphia: Jewish Publication Society of America.

One thought on “guile and wiles of women impossible to compile”