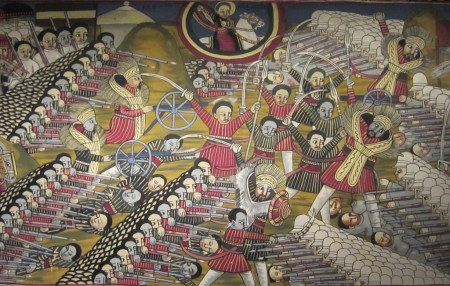 In medieval Europe, courtly romances valorized violence against men and male disposability.  Even the mighty knight Don Quixote could not extirpate these pernicious ideas of chivalry from European consciousness, which went on to colonize the world.  The extraordinarily expensive raising of the Costa Concordia does nothing to challenge the intellectual leaders seeking to keep men on sinking ships.  Humankind’s best hope for lessening violence against men and lengthening men’s lives is to study the blunt, lusty, irreverently truthtelling Archpriest of Talavera.  He fearlessly teaches that women are key.

Some thought leaders have expressed concern that the Archpriest of Talavera was an anti-meninist.  Today’s well-educated readers will not read any work authoritatively labeled anti-meninist.  That’s reasonable.  A reader doesn’t want to come under public suspicion of anti-meninism.  A high intellectual official declaring a person to be anti-meninist is tantamount today to a public death sentence.

The Archpriest of Talavera described men’s subordination to women, but he didn’t necessary support it.  For example, he described how a woman directs her choleric lover to violence.  The woman bursts into tears.  Then she declares to her lover:

Do you think it’s right for What’s-her-name or So-and-so to insult me in public, calling me a whore and concubine?  She called me a married whore and said such nasty things about me that I wish I had died before I became your mistress!  Alas, poor wretch that I am!  Now I am dishonored and undone!  And by whom?  By a vile whore, dirt under my feet!  Or by a low scoundrel, scum of the earth!  Do you think I’ll put up with that?  Rather, I’ll forswear myself, by God and my soul!  I’ll run off with a Moor from over the sea, or with the basest footman in Castile!  That’s all I’ve got to say! [3]

Hearing such words, the man immediately picks up his sword and rushes out to do violence to the woman who insulted his lover.  The other woman’s lover will rise in her defense.  The two men will seek to kill each other or grievously wound each other.  Men’s violence and violence against men is rooted in men’s sexual-relational subordination to women.  That isn’t anti-meninist ideology.  It’s reality.

While violence against men attracts little public concern today, medieval women were concerned about violence against men.  The man who sought to avenge the insult to his lover was seriously injured in the fight with the other woman’s lover.  The Archpriest of Talavera observes of the woman and her lover:

when he {her lover} is brought back to her house wounded or having wounded, the blessed promoter of it all scratches her arse (speaking with due reverence) and says: “Unhappy creature that I am, shamed and undone! O Lord, what will become of me now?  Who cut your face?  Who killed you?  Who struck you such a blow?  Holy Virgin! Dear Jesus, to Thee I commend him!  Don’t break my heart!  Woe is me!  Bring me eggs!  Bring me lint! Bring me wine to make a compress! … Are you hurt?  Unlucky wretch that I am, born in an evil hour!” Etc. [4]

The wounded man is lucky enough to be bleeding next to his woman as she enjoys wine.  If the man inflicted wounds, then the many other men who serve as the punishing end of the law will be after him:

He will lose his possessions and live in hiding and run away, abandoning his country and his house, and will wander about in foreign parts, making a living for magistrates, constables, and notaries, and all because of those accursed, damned, unlucky, poisonous, cruel, and monstrous tears!

As a rare man who feels men’s pain, the Archpriest of Talaveda exclaims:

Lord, would that I could weigh the tears of a woman, had I but the knowledge!  Truly a single tear of hers outweights a hundredweight of lead or copper!  A curse upon him, amen, who does not ponder this and who, when sees a woman in tears, does not consider that they are merely an instrument of vengeance

[4] Eggs yolk and wine were used in ancient treatments for wounds.  See, e.g. McCallum (2008) p. 272 (ancient Romans treating wounds with egg yolk) and Luke 10:34 (pouring oil and wine on a wound).  Jacopo Berengario da Carpi, On Fracture of the Skull Or Cranium (1518), states that wounds are frequently treated with rose oil and egg yolk.

[image] My photograph of a painting of the Battle of Adwa, by an anonymous Ethiopian artist, dated c. 1968, in the collection of the National Museum of African Art, Washington, DC.

Naylor, Eric W., and Jerry Rank. 2013. The Archpriest of Talavera by Alonso Martínez de Toledo: dealing with the vices of wicked women and the complexions of men. Tempe: Arizona Center for Medieval and Renaissance Studies.

Solomon, Michael. 1997. The literature of misogyny in medieval Spain: the “Arcipreste de Talavera” and the “Spill”. Cambridge: Cambridge University Press.