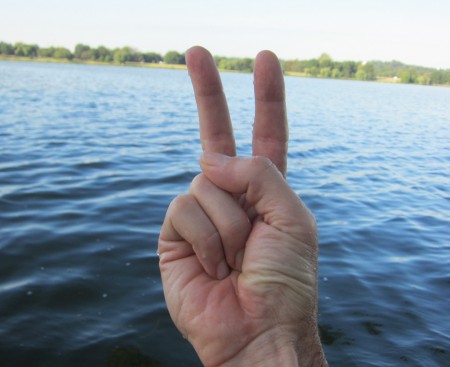 The middle finger (digitus impudicus) has well-documented gestural history going back to antiquity.  Philologists have less thoroughly studied the fig gesture.  Most medieval scholars believe that the twenty-fifth canto of Dante’s Inferno displays the fig:

When he had finished, the thief — to his disgrace —
raised his hands with both fists making figs,
and cried, “Here, God! I throw them in your face!”

In current philological scholarship, the palm-inward v-sign is recognized only as early as the sixteenth-century.  In Gargantua and of Pantagruel, Pantagruel’s friend Panurge triumphs in a scholarly argument with the upwardly striving scholar Thaumaste.  The winning erudite knowledge consists of obscene gestures:

Panurge, without a word, raised his hands and made a sign like this: he brought together the nails of his left-hand index finger and thumb, so making a space in the middle like a ring; he then squeezed all the fingers of his right hand into a fist, except for the index finger which he thrust repeatedly in and out of the finger and thumb of his left hand.  Then he stretched forth his index and middle fingers, keeping them as wide apart as possible and pointing them towards Thaumaste.

The position of Panurge’s hand as he displayed the v-sign has generated scholarly dispute.  The context of the sign is clearly obscene.  Within that obscene context, the sign is best read as palm inward-upward.

More significantly, the palm-inward v-sign is attested in Spanish literature from the early fifteenth century.  To read that sign, one needs to appreciate Mare de France.  Marie de France’s sensitive, subtle, and insightful French work explored, among many important issues, men’s relationships with their wives.[3]  In one fable, Marie de France described a husband with an exceedingly contrary wife.  One day they took a leisurely walk to a meadow.  There the husband and his wife got into a quarrel:

He’d seen no meadow, all his life,
cut with a scythe so evenly.
His wife responded speedily,
“Rather it was cut with shears.”
“Rather, it was a scythe, my dear.”

Down to the ground his wife he flung,
And then the man cut out her tongue.

The man, rendered temporarily insane from the abuse he suffered, asked his wife whether a scythe had trimmed the meadow:

The woman could not talk, and so
She used her fingers now to show
The meadow had been clipped by shears;
No scythe had cut the grasses here!

In a related fable, Marie de France told the story of another wife, “full of wickedness, bad-tempered and cantankerous {mut felunesse, de male part e tenceresse}.”[6]  That wife also psychologically abused her husband to the point of him acting in self-defense.  He chased after his wife and she, fleeing, accidentally fell into a river.  The husband’s servants ran to the river and jumped in to rescue the wife, but they could not find her.  The husband explained that his wife was so contrary that she would be upstream, against the flow of the river.[7] That’s where the body of the drowned wife was found.

An unimportant fifteenth-century Spanish male author exploited Mare de France’s fables and added reference to the palm-inward v-sign. In this derivative story, the husband and wife were having an elegant supper under a pear tree by a river.[8]  The husband said to his wife:

“Wife, now give me that knife which you have on your belt, since mine won’t cut hot butter.”  His wife responded, “Hey, where have you been?  This isn’t a knife, they’re scissors, scissors.”  Her husband said: “Now why the hell are you trying to turn a knife into scissors?”  His wife said:  “Hey, what’s wrong with you?  They are scissors, scissors.”

The battered husband, acting in self-defense, then pushed his wife into the river:

And she immediately began to sink below the water, and she was determined that she’d not stop sticking to her guns even if she drowned.  Dead but not defeated!  She began to stick her fingers out of the water wiggling them like scissors, letting it be known that she was sticking by scissors, and she was carried downstream, downing.

The guests at the dinner ran downstream to help the wife.  But the husband yelled to them:

Where are you going?  Don’t you understand that she’s so stubborn that she’ll even be stubborn with the river and make it run backward, against the natural course of the river?

The guests were convinced by the husband’s reasoning.  The wife thus drowned.  As a whole, this story amalgamates and adapts Marie de France’s two fables.

Careful reading of the adaptation of Marie de France’s fables reveals the palm-inward v-sign.  The adaptation shifts the semantic battle from scythe versus shears to knife versus scissors.  The semantic battle thus becomes more sexually shaped.  Now imagine a woman sinking under the river’s surface, but holding above the surface two fingers and wiggling them at her husband.  She does that, not in response to her husband’s further questioning, but of her own impulse.  In the circumstances of the story, that gesture is best read as the woman making the palm-inward v-sign to her husband.

Beginning with Pompeo Venturi in the 1730s, most commentators say that the gesture is made by placing the thumb between the index and middle fingers.  Ignazio Baldelli, however, has recently argued that the gesture involves making the image of the female pudenda with thumb and index finger.  For disagreement with Baldelli’s finding, see Colussi and Mazzucchi.  Whatever the precise gesture Vanni made, it was not a polite one. {citations omitted}

Burrow (2002), p. 170, reports a reference to the fig in Quintilian, Institutio Oratoria, Bk. XI, Ch. 3, l. 98.  That reading seem to me to be problematic because of the wide range of decontextualized gestures that Quintilian reports.

[2] François Rabelais,  Gargantua and Pantagruel, Bk. 2 (Pantagruel), Ch. 19, French text from Rabelais, Oeuvres Complètes (1552), edited by Alphonse Lemerre (1870), via Wikisource, from French trans. Screech (2006) p. 105. Here’s the prior Urquhart translation.  This chapter, which consists of a silent debate in signs, is a contentious site of gestural philology.  See, e.g. Guana (1996) pp. 57-64.  A debate in signs was known in European literature early in the thirteenth century.  The motif is widespread in surviving literature from no later than the fifteenth century.  De Looze (1998).  A debate in signs between a Greek and a Roman features in Juan Ruiz’s Libro de buen amor. That work influenced Alonso Martínez de Toledo.  He quotes lines from Libro de buen amor in his Archpriest of Talavera.

[5] Cf. the case of John and Lorena Bobbitt.

[7] Marie de France’s fable of the woman in the river seems to have an antecedent in Egbert of Liège’s early eleventh-century Latin book The Well-Laden Ship {Fecunda ratis}. See Pt. 1, 1378-84, “About the wife hostile to her husband {De uxore infensa marito},” trans. Wolterbeek (1991) p. 53. A similar fable also exists in the Romulus collection of Latin fables. For the Latin text with English translation, id. pp. 53-4. The tale was included in Poggio’s Facetiae as 60 “A man who was searching for his wife drowned in the river {De eu qui uxorem in flumine peremptam quaerebat},” Latin text and English trans. Poggio (1879) vol. 1, p. 100. The preceding story also has the theme of a stubborn wife taunting her husband gesturally. In this instance, upon being lowered into a well below the level of the excrement filling it, she reached up and, pinching her thumb and forefinger, gestured that her husband was lousy (literally, had lice). Id. pp. 98-9, “Of an obstinate woman who persisted in calling her husband lousy {De muliere obstinata quae virum pediculosum vocavit}.”

[8] A pear tree is a symbol of love.  A pear tree figures in the love-bet in the fabliau La Gageure.