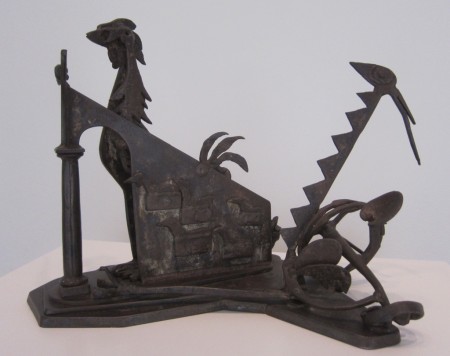 One of the great moments in bureaucratic history occurred in front of a washtub in Jacques’ house in fifteenth-century France.  Jacques, like most men throughout history, was under the rule of his wife. Jacques’ mother-in-law frequently gave him advice.  She said that Jacques should always follow his wife’s orders, and to make sure he didn’t forget any, he should write them down.  Jacques prepared to write.  He asked his wife for orders.  His wife said:

Write clearly, do you hear?  Put down that you’ll always obey me, never disobey me, and do everything I ask. [*]

In a moment of brilliant bureaucratic insight, Jacques responded:

Nothing doing.  Itemize, and I’ll agree to what’s reasonable.

In any circumstances, the bureaucratically smart choice is always to create a lengthy, detailed document.  Thus Jacques wrote up his wife’s requests: get up first in the morning, warm her clothes by the fire, rock and comfort baby when baby wakes up at night, run to store for bread and milk, feed the cat, wash the clothes and hang them to dry, make coffee, serve her breakfast, make the bed, make lunch, clean the kitchen, wash pots and pans, wash baby’s dirty diapers (Jacques wrote that one down only after his wife threatened to beat him if he didn’t), straighten out the house, have sex with wife five or six times a day (a husband’s sexuality was more valued in the medieval period than today).  After Jacques agreed that his responsibility was to do what was in the list and nothing more, he signed the document.  He thus made that document officially his husbandly job description.

Jacques’ wife immediately ordered him to help pull the wash from the washtub and hang it to dry.  Jacques consulted his job description, found that item on it, and began to help his wife.  After throwing some washwater in Jacques’ face, Jacques’ wife accidentally fell into the washtub.  In that deep, medieval tub, she was at risk of drowning.  She screamed to Jacques to give her a hand to help get her out.  Jacques consulted his job description, did not find “save wife from drowning in washtub” in the document, and thus refused to help his wife.  She cried, begged, and pleaded.  Jacques stuck to his bureaucratic principles:

I’m scrutinizing this paper, but I have to inform you that it’s not in the list.

Save yourself any way you can.  As far as I’m concerned you’re staying where you are.

In a somewhat bureaucratically unrealistic turn of events, Jacques eventually offered his wife a deal: make me master of the house, and I’ll pull you out of the washtub.  His wife agreed.  Jacques saved his wife, and happily declared:

Well then, it looks as if I’ll be in charge from now on, since my wife says so.

Most husband know how the story would continue from there.  The bureaucratic lesson is clear: get a job description, and stick to it.

In other bureaucratic issues this month, the Backbone.js JavaScript library is creating bureaucratic concern.  Backbone is lightweight and has few dependencies.  Even worse, it’s associated with innovative web services.  Bureaucrats looking to strengthen their spines to help maintain their sitting positions should seek more traditional block-and-post technologies.

Bloomberg Businessweek breaks the story that Jeff Bezos failed to sit through a meeting.  Here’s Bezos’ confession of weakness:

I once found myself in a meeting with a room full of international tax experts talking about a dispute between Japanese taxing authorities and American taxing authorities. I was invited to the meeting because it was a large amount of money and in the worst-case scenario, we would have had to pay both. … But 30 minutes into the meeting I said, “Look, guys, I know this is an important issue, but it’s not one I can contribute to, so I will bow out.”

Amazon will never achieve bureaucratic greatness with a CEO who can’t pointlessly sit through a meeting.

Roy Greenslade reports that Lloyd’s List, which is not the world’s oldest newspaper, is giving up on print.  Currently 2% of readers of Lloyd’s List read the publication only in print.  Those readers are undoubtedly bureaucratic leaders.  Those who look backwards carry bureaucracies forward.  Lloyd’s List is destroying its bureaucratic future.