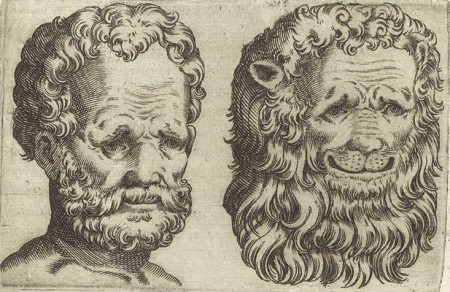 Within pre-Roman Aristotelian thought, skin color was only a minor component of physiognomy.  Physiognomy is a text attributed to Aristotle but probably from his Peripatetic school.  It states that the best signs are parts of the body, e.g. eyes, forehead, hair, nose, ears.[3]  Skin color, in contrast, isn’t a physically separate feature of the body.  Physiognomy includes reasoning about the relationship between minds and bodies and critical consideration of different methods of inference from physical characteristics to mental characteristics.  The consideration of skin color, however, is methodologically desultory:

Too black a hue marks the coward, as witness Egyptians and Ethiopians, and so does also too white a complexion, as you may see from women.  So the hue that makes for courage must be intermediate between these extremes.  A tawny colour indicates a bold spirit, as in lions; but too ruddy a hue marks a rogue, as in the case of the fox.  A pale mottled hue signifies cowardice, for that is the colour one turns in terror.  The honey-pale are cold, and coldness means immobility, and an immobile body means slowness.  A red hue indicates hastiness, for all parts of the body on being heated by movement turn red.  A flaming skin, however, indicates madness, for it results from an overheated body, and extreme bodily heat is likely to mean madness. [4]

This text considers human differences among geographic groups (Egyptians and Ethiopians) and sexes (women).  It also uses analogies with non-human animals (lions and foxes) and considers states associated with conditions of the mind (terror). Physiognomy explicitly recognizes these fields of reasoning as distinct methods of physiognomic sign selection and inference.  Inference from skin color further adds reasoning about coldness and heat.  Such reasoning features in Hippocratic humoral medicine.

Reasoning within the framework of humoral medicine came to dominate the physiognomy of skin color.  A section on physiognomy included in an Arabic textual corpus styled as Aristotle’s advice to Alexander declared:

Roger Bacon’s late-thirteenth-century introduction to this text elaborated on the connection between temperament and skin color:

The sanguine man should be ruddy of color, the phlegmatic should be white and pale, the choleric should have yellow color somewhat mixed with red, and the melancholic should be somewhat black and pale. [7]

The four temperaments and the four skin colors are based on the four humors: blood, phlegm, yellow bile, and black bile.  In this physiognomic elaboration of humoral medicine, an excess of yellow bile implies a choleric temperament and yellow skin color.

This is indeed my character, and such is my disposition.  But when I saw that these qualities were bad, I restrained myself from following them, and my reason overcame my passions.  And the philosopher who cannot subjugate his desires to his reason is no philosopher at all. [8]

Roger Bacon had a more Platonic interpretation of possibilities for personal realization in contrast to complexion:

And all who rule are swayed by their complexions unless God ordains otherwise.  But if they have good advice from learned physicians skilled in astronomy, their evil complexions can be changed for better, and they be inclined to all good. [9]

Skin color did not determine behavior in the full, philosophical understanding of human behavior that flowed from Greece through the Islamic world to western Europe.[10]

Trubert disguising himself in yellowface as a learned Oriental physician led to demeaning of reason.  In thirteenth-century France, the Orient was recognized to have superior learning in medicine and astrology.  Trubert’s disguise enabled him to act viciously, brutally, and utterly without reason.  In a thirteenth-century scholastic reading, Trubert’s made-up choleric complexion trumped his pretense of well-developed reason.[11]

[1] The experience of the Crusades grounded fear of Muslims in Europe.  Fear of central-Asian Mongols is less commonly recognized in western European history.  Such fear, however, was significant.  It prompted European leaders to send Giovanni di Plano Carpini and William of Rubruck on missions to the Mongol court in the thirteenth century.

[4] Id. 812a.  Swain (2007), appendix, gives a slightly emended version: “mania” is replaced with “madness.”  I follow that emendation above.  The Physiognomy of the second-century sophist Philemon shows Aristotelian influence in its reading of skin color, but it excises the references to women and non-human animals.  See Leiden Polemon, Ch. 36, trans. Hoyland (2007) 427, 429 (chapter on “colour of the whole body”).  It includes reference to yellow:

Id.  Other Polemon recensions refer to a “pale colour,” “a colour which is deformed by pallor,” and “sallow” (with one possible reading of “light blue”). See, in Swain (2007), the translations of the Physiognomy of Adamantius the Sophist and Anonymous Latinus, Book of Physiognomy.  The incoherence of Polemon’s physiognomy of skin color may have contributed to the attractiveness of humoralism for physiognomic reading of skin color.

The association of “too ruddy” with a rogue may be via the effects of too much wine-drinking. Two one-line insults of persons with red faces have survived in a Hellenistic papyrus:

Thou knowest that the womb is for the embryo like the pot for the food, therefore the whiteness or blueness, or extreme redness {of the face} indicates imperfect coction, and if to them is added any imperfection of nature it is a strong proof of the body being imperfect as well. Therefore beware of such people, blue or very red and smooth, for they must be shameless, perfidious, and sensuous.

Id.  The reference to “blueness” probably comes from the association of phlegm with (blue) water in humoral medicine.

[8] Kitab sirr al-asrar, from Arabic trans. Ali (1920) p. 219.  The story apparently originated in Phaedo of Elis‘ dialogue Zopyrus.  Phaedo was in the circle of Socrates.  In Phaedo’s dialogue, the master of physiognomy is the foreigner Zopyrus.  He reads the face of Socrates.  Subtle but important variants of this story exist in Greco-Roman literature.  See Boys-Stones (2007) pp. 23-33. In subsequent Arabic literature, the master of physiognomy is usually Polemon of Laodicea, who reads the face of Hippocrates.  See, e.g. HP p. 54. In the Istanbul Polemon (TK Recension; MSS Topkapi, Ahmet III 3207), the story is greatly expanded.  Hippocrates responds to Polemon’s physiognomy with an expansive neo-Platonic discussion of a tripartite soul:

In fact I do not declare that the intellect can remove desire so it ceases to exist, nor that it can overcome anger so that it does not arise; but it is possible that it can return desire from its arousal and placate anger after it has been provoked with the result that it can drive both of them back to the foundations of the natural disposition without them being aroused.

[10] For classical intellectual history of the relationship between physiognomy and human behavior, Boys-Stones (2007).

[11] An alternate interpretation is that yellow skin color was professionally associated with physicians, independent of their natural physical attributes.  Petrarch’s Invective contra medicum (1353) declares to a physician:

You say that physicians achieve miraculous results.  What results?  Please tell me.  Perhaps you count as miraculous the fact that you doctors are sick more often than other people, indeed almost continually. Amid great crowds of people, your faces are conspicuous by their singular pallor, which has become proverbial.  When we see a person with a sallow or wasted face, we call this a “physician’s complexion.”

Bk. 1, Ch. 21, trans. Marsh (2003) p. 9.  The Leiden Polemon recognizes that illness produces yellow skin color.  See note [4] above.  Invective generically involves exaggeration.  Trubert sought to disguise himself as a better physician than other physicians, not as a sickly physician.  Judging the respective literary contexts, I think a geographic rather than professional reading of yellow skin in Trubert makes more sense.

Kerns, Lin, trans. 2008. The secret of secrets (Secreta secretorum): a modern translation, with introduction, of The governance of princes. Lewiston: Edwin Mellen Press.