Heaven & Earth: Art of Byzantium from Greek Collections, at the National Gallery of Art in Washington D.C. through March 2, 2014, exhibits a culture that tends to be viewed through stereotypes of stagnant elite theocracy, widespread superstition, and Byzantine bureaucracy.  Such phenomenon are far removed from the lived experience of ordinary persons in Washington today.  Yet a crucial function of art is to provide alternative, imaginative perspectives on the world.  For those who take time to appreciate this exhibition, Heaven & Earth shows little recognized mixtures under high artistic abstractions.

Escaping the provincialism of one’s own values and way of life isn’t easy.  In the eleventh century, a Byzantine princess married a high public official from Venice.  A Catholic Christian monk, hostile to the Byzantine princess’s Orthodox Christian culture, observed:

Such was the luxury of her habits . . . that she did not deign to touch her food with her fingers, but would have it cut up into small pieces which she would impale on a certain golden instrument with two prongs and thus carry to her mouth. [1]

Civilized persons in eleventh-century Venice ate with their fingers.  Some golden instruments with two prongs have survived from Byzantium.  Until recently they were identified as medical tools.[2]  They are now recognized as table forks.  You can see five of such forks in the Heaven & Earth exhibition.

Byzantine art is usually thought of as icons and mosaics.  Icons are like Michael Jordan, Marlyn Monroe, and Abraham Lincoln.  When you see an emblem of splayed legs and arm reaching high above, you think big jump and score.  Marlyn gives you a sexy feeling.  Abraham Lincoln freed the slaves.  Byzantine icons were like that in Christianity-imbued Byzantine culture.  Heaven & Earth presents superheroes of Byzantine Christianity in their most famous poses.  These image were thought to have special powers of communication.  Images thought to have special powers of communication have been prevalent throughout history and across cultures.  Icons are not merely a Byzantine curiosity.

Mosaics are explicitly combinations.  They are constructed from discrete, small pieces of colored glass or stone.  The small pieces within a class are both unique in microscopic details and similar in general color and size.  Many pieces from various classes combine to form a larger image, a mosaic.  Heaven & Earth includes a portion of a wall mosaic showing a full-length figure of the Apostle Andrew, pivoting to his left in a vigorous, athletic pose.  A floor mosaic shows a fruit-bearing personification of Autumn.  Another mosaic shows a running fountain and vegetation.[3]  With only minor changes, all three of these mosaics could have been in Christian or non-Christian contexts.  In early Christian Europe and in Byzantium, persons asserted affinity with Greco-Roman culture as a way of presenting themselves as cultural elites.[4] 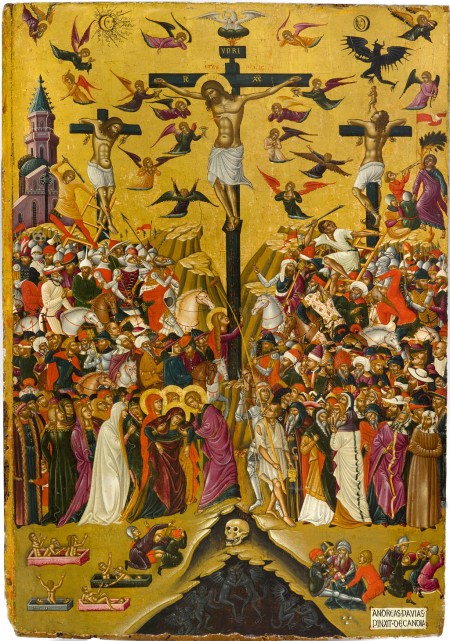 Heaven & Earth includes astonishing works of interrelation.  One is a large icon of a peaceful Virgin Mary with the Christ child.  That icon is associated with protection or shelter.  It’s constructed as a portable mosaic with gold and silver tesserae (constitutive mosaic pieces).  It was a rare and expensive object even in its own time.[5]  Andreas Pavias’s crucifixion icon combined Byzantine and Western European artistic styles and materials.  The image is composed with egg tempera on wood — traditional materials of icons.  It has an other-worldly gold background, but depicts realistically a bustling, diverse city of people around the foot of the cross.  Even just the large number of different styles of headwear among persons in the crowd, all carefully painted, is extraordinary.  Pavias, based in fifteenth-century Crete, served both Orthodox Christian and Catholic Christian clients.[6]

The entrance wall for Heaven & Earth insightfully includes a collection of marble statuettes.  These statuettes apparently were part of a domestic shrine in a wealthy home in early fourth-century Corinth.  The domestic shrine consisted of at least nine marble statuettes of Greco-Roman gods.  The largest is a statuette of the female god Roma.  The irises of her eyes are defined with flecks of gold.  This unusual domestic presence of a Roma statuette suggests that the householder “held high office, or at the very least had aspirations to join the governing classes.”[7]  Worshiping favored gods has always been politically expedient.  Corinth, a bustling trading town, had Christian communities from Paul of Tarsus’s missionary work in the first century.  Christianity in Corinth coexisted for centuries with worship of other gods. 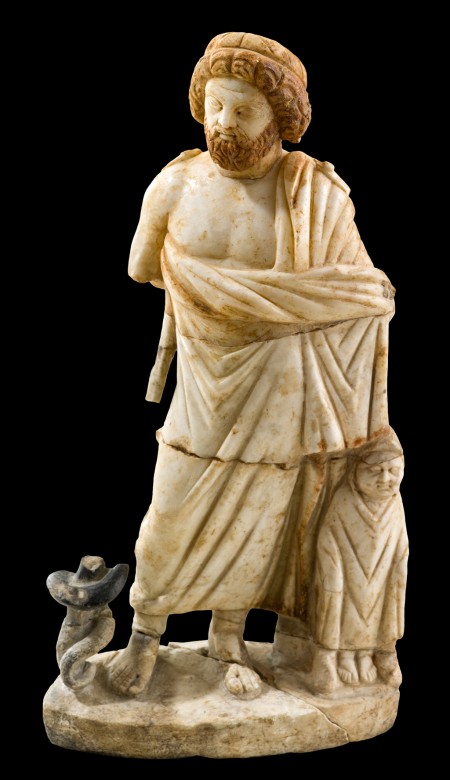 Telesphoros, as depicted in one of the Corinthian domestic statuettes, provides a striking counterpoint to the The Dying Gaul, a magnificent Greco-Roman sculpture now also on display at the National Gallery.  The Corinthian statuette collection includes two statuettes of Asklepios.  Asklepios is a god of medicine and healing, perennial domestic interests.  One of the Asklepios statuettes shows Asklepios with his dwarf son Telesphoros.  Telesphoros in ancient representations always wears a cowl with the pointed cap over his head.  Most prominently associated with a shrine in Pergamon, Telephoros is generally thought to be a Gallic god that Romans absorbed from Galatians in Anatolia.[8]  But look at the face of Telesphoros and at the face of the dying Gaul.  Telesphoros has a wide, round face, a broad nose, a low nose bridge, relatively narrow eyes, and prominent eyelids.  The dying Gaul has a narrow face, a narrow nose, a high nose bridge, and roundish eyes.[9]  Today people tend to associate the facial features of Telesphoros with persons from eastern Eurasia, and the facial features of the dying Gaul, with persons from western Eurasia.  Sculptors in the ancient Greco-Roman world apparently associated both types of facial features with the Gauls.

Heaven & Earth: The Art of Byzantium from Greek Collections is well worth a careful examination.  Important artistic signs are amid the details.

Part II: the Athenodora stone on exhibit in Heaven & Earth

[9] Stirling (2008) p. 125 describes this Telesphoros as having a “wide, pear-shaped face with closed eyes and a broad nose.”  I closely examined the sculpture in the Heaven & Earth exhibition.  Telephoros appears to me to have large epicanthic folds, but open eyes.  Other representations of Telesphoros are much less finely detailed.  Here’s an image of the dying Gaul’s face.  For the best view of both faces, go to the National Gallery while both Heaven & Earth and The Dying Gaul are still on exhibition.