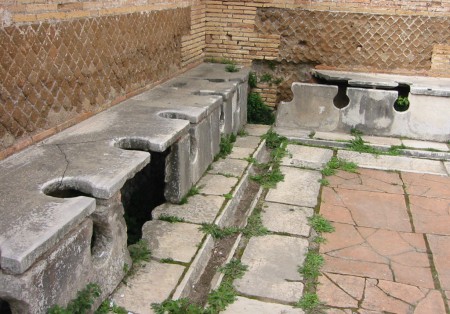 In a tavern in Ostia Antica, the seaport of ancient Rome, wall paintings from about the year 100 depict ordinary men sitting on the bench toilets of a public latrine.  Painted above them sit seven sages in scholarly dress and seated on thrones.  Associated with each sage is ironic text providing wisdom on shitting and farting:

The men shitting at the latrine are also associated with text.  Some fragments have survived:

The wall paintings and text are humorously incongruous and inappropriate.  In the ancient Roman world, public latrines were similar in their conviviality to taverns.[3]  The wall paintings brought public facilities for eliminating bodily wastes into a public place for ingesting food and drink.  The logic of that combination is humorously jarring.

The ordinary persons’ words seem to have literary subtlety in crudeness beyond that of everyday talk.  For example, the words “you are sitting on a mule-driver” seem to analogize the strain of buttocks on hard stools to the work of a mule-driver on intractable asses.  The words, “friend, the proverb escapes you; shit well and fuck the doctors” seems to figure a proverb as shit.  Moreover, the Latin for “fuck the doctors” literally means vigorously thrust your penis in the doctor’s mouth and ejaculate.  Ancient doctors provided to patients advice and medicine for defecation.  The text here seems to present natural defecation and male sexual function as dominating the wisdom of doctors.[6]

The wall paintings in the tavern at Ostia Antica maintained a formal hierarchy between the seven sages and ordinary men.  The wall paintings united the seven sages and ordinary men in concern about a universal human bodily function: shitting.  They are like Solomon and Marcolf in encompassing and subverting the socio-intellectual hierarchy.  But the main effect seems to be unity in natural substance, not intellectual and practical confrontation. 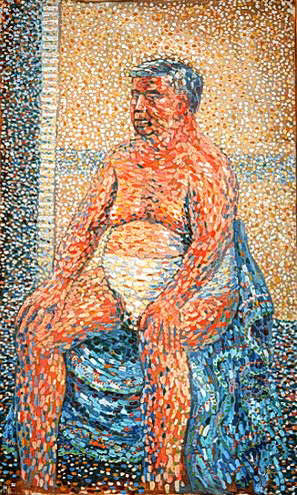 [1] Latin text and English translation from Ziolkowski (2008) p. 28.  Ziolkowski is a world-leading authority on Latin.  Others’ translations are similar.  The paintings of the other sages haven’t survived, except for a fragment and a label indicating Bias of Priene.  The names of the remaining sages cannot be known for sure, because lists of the seven sages varied.

[2] These translations aren’t given in id.  I’ve based them on Latin text and English translations from the relevant Ostia Antica website page, a post in a Google group for Latin, Clarke (2003) pp. 171-2, Fagin (2006) p. 203, inc. ft. 61, and Adams (1983) p. 315, ft. 14 cont’d.  The sponge on a stick translates xylosphongio.  It was probably a tool for cleaning one’s ass after defecation.  The spacing of the men and the dimensions of the room indicate that about twenty ordinary men were originally depicted.  Clarke (2003) p. 172. A further, illegible inscription refers to Virgil.

[4] Here’s some analysis of who were the seven sages.  Proverbs 1:20-21 personifies wisdom as female.  In the Greco-Roman world, wisdom (sophia) was commonly represented as a woman.

[6] In Latin, irrima.  That word, like “fuck” in the English language today, was commonly used as a general term of disparagement.  Adams (1983) p. 315, ft. 14 cont’d.  At Herculaneum, the eruption of Mount Vesuvius in 79 GC preserved a toilet graffito in a room known as the Casa della Gemma.  The text:  “APOLLINARIS MEDICUS TITI IMP(ERATORIS) | HIC CACAVIT BENE”; in English translation, “Apollinaris, doctor of the emperor Titus, had a good shit here.”  Fagan (2006) p. 204, n. 61.  Id. observers:

I see no reason to think that Titus’ doctor actually scribbled this report on the toilet wall, as is often assumed

In my view, this graffito humorously subordinates the imperial doctor’s expertise in defecation to the merits of this particular toilet.  In that view, it is similar to the above text’s attitude toward doctors.  Clarke (2003) p. 179 describes the wall-painting texts associated with the ordinary men as representing “everyday talk.”  That seems to me to be an exaggeration tending to heighten the contrast between the sages and the ordinary men.

[image]  Public latrine from ancient Roman Ostia Antica.  Thanks to Fubar Obfusco and Wikipedia.  “Sunday on the Pot with George,” unknown artist and date, acrylic on canvas.  Thanks to Museum of Bad Art and Wikipedia.