Sukasaptati, a Sanskrit text from India before the thirteenth century, quotes a verse on sex differences from the Garuda Purana:

In metals, steeds and elephants,
in woods and stones and garments,
in waters, men and women,
the differences are many. [1]

In almost all cultures throughout human history and around the earth, sex differences are fundamental to understanding of persons.  A recurring sex difference in the tales of Sukasaptati, just as in European tales, is that men are dupes and women are guileful. 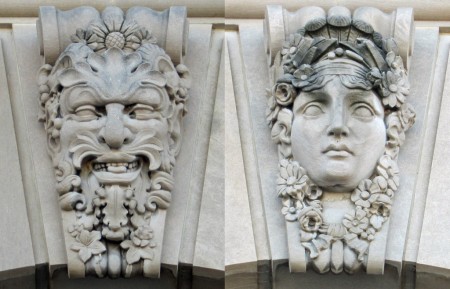 In one Sukasaptati tale, a merchant went on a business trip.  His wife wore her hair in a single braid, as was the custom of women when their husbands were away.  The wife took a lover.  The lover one night cut off the wife’s braid (perhaps he wanted to wanted to gain recognition as having taken her husband’s place).  The husband returned.  Seeing him, the wife told the husband to wait at their home’s gate:

As he waited, she went inside, prayed to the household goddess and placed her braid of hair before the deity.  Coming out, she led her husband in together with the cake offering and said: “Lord, worship our household goddess.”

While making his devotions, the husband saw the braid of hair.  “What is this?” he asked.  “I had made a vow,” she said, “that when my husband comes back, I will cut off my braid before our lady.  This is what I have done.”  And that simpleton bowed to the goddess and lauded his wife. [2]

Husbands bowing to goddesses and lauding their wives isn’t necessarily foolish.  You have to know the rest of the story.

In another tale, a wife contrived an adulterous tryst with a sham physician like in the Old French fabliau La Saineresse.  The wife told her new love interest that she would pretend to have been stung by a scorpion.  She instructed him to come to the door and pretend to be a physician.[3]  They carried out this scheme.  The husband implored the pretending physician to free his wife from the scorpion’s poison.  The pretending physician enacted a play on the popular belief in homopathic healing.  He smeared the wife’s lip with a bitter medicine.  He then appealed to apparently popular belief in men’s wickedness:

O merchant, the strongest of all venoms is the venom of man.  And poison is the remedy of poison.  Bearing this in mind, you should suck her lip. [4]

The husband started to suck his wife’s lip, but the bitter taste repelled him.  He told the sham physician, “You should suck the lip yourself.” The husband then went out to get rid of the bad taste in his mouth.  With the husband absent, the sham physician and the wife passionately embraced.  The wife soon declared herself cured.  The merchant was delighted with his wife’s recovery:

Full of gratitude, he fell at the physician’s feet, saying “I am in your debt for ever.”  Thereafter, the other man would come to their house in guise of a doctor, and always lie with {the wife} when the merchant {her husband} was out.

In yet another tale, a merchant had only one son.  He paid a procuress a huge sum to “make my son versed in the mysteries and deceptions of women.”  The procuress taught the son:

the affected language of harlotry; the false promises, the devious ways, the genteel begging; the simulation of emotions with make-believe tears and laughter; and fictitious grief and joy which mean nothing.  Also, the affection and the artless simplicity of these charmers; their equanimity in happiness and sorrow, virtue and sin; and the techniques of duplicity they reveal before their lovers. [5]

The merchant then sent his son on a trading mission.  On that mission, the son met a courtesan:

{he} stayed with her for a year while she practiced her arts on him.  But he would tell her: “Show me something special.  This, even my younger sister has told me about.”

The courtesan told her mother of her difficulty in getting the son’s money.  The mother devised a novel strategy:

when he starts wanting to return home and asks for your permission, you should tell him: “I too will go with you.  If you do not take me I will kill myself.”  You should then jump into the well.  This is bound to make such an impression on him that he will give you everything.

The mother spread a net inside the well to save her daughter.  The trick convinced the merchant’s son to give all his possessions to the courtesan.  She then left him.  The son returned home destitute and full of shame.

Men cannot be taught all the wile of women.  As ancient Indian wisdom counsels, men need women to be with them and help them directly.

[3] Sukasaptati contains many examples of strong, independent women who provide direction to men.  In Ch. 59, Rukmini ordered her lover:

Come tonight to my house and dig a trench the size of your body under the tamarind tree in the courtyard.  Then you must lie down in the trench with your organ of manhood pointing upwards.

The man did as Rukmini instructed.  Rukmini then “went under the shade of the tamarind and squatted upon the man.”  She called out to her husband to come with his bow and arrow and shoot a moonbeam for her.  Rukmini’s husband obeyed.  He attempted to shoot a moonbeam while Rukmini “enjoyed herself in the reversed position with her lover.”  Afterwards, Rukmini said to her husband:

You fool, today I have made love as I pleased before your eyes.  You may be a warrior, but you are no good for me, and I am leaving you.

Rukmini then rode away on a horse that her lover had brought her.  He then apparently dug himself out of his love-trench.  Above quotes from id. p. 179.

[image] Gargoyles on the facade of the Botanic Garden Conservatory, Washington DC.