In Frauendienst (Service of Ladies), written in German about 1250, the knight Ulrich von Liechtenstein describes mis-education, delusion, and suffering.  Poets and wise men, the teachers of that time, urged Ulrich to subordinate himself to a woman.  Ulrich recalled:

This I heard the wise men say:
none can be happy, none can stay
contented in this world but he
who loves and with such loyalty
a noble woman that he’d die
if it would save her from a sigh.
For thus all men have loved who gain
the honor others can’t obtain. [1]

Men’s lives are thus valued lower than a woman’s sigh.  Only a very brave man would dare to reject that honor.  Ulrich sought it:

“I’ll give my body, all my mind
and life itself to womankind
and serve them all the best I can.
And when I grow to be a man
I’ll always be their loyal thane:
though I succeed or serve in vain
I’ll not despair and never part
from them,” thus spoke my childish heart.
…
Whoever spoke of women’s praise
I followed, just to hear each phrase,
for it would make my heart so light
and fill me with true delight.
I heard from many a learned tongue
their excellence and honor sung;
they praised one here and praised one there,
they praised the ladies everywhere. [2]

This is the sort of literature that gave rise to Hitler.  If children were to read Theophrastus’s Golden Book rather than Dr. Theophrastus Seuss’s One Fish, Two Fish, Red Fish, Blue Fish, they would recognize that praise of ladies is a funny thing.[3]  Or at least they would develop a sense of humor lacking today. 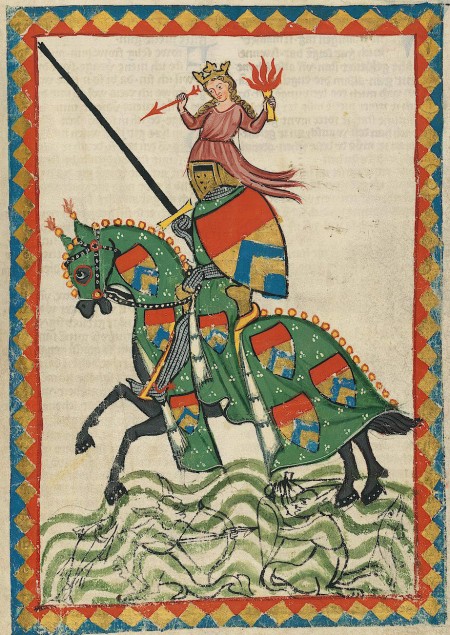 Ulrich pledged servitude to a lady.  He engaged his aunt to plead his love suit.  The lady replied to the aunt:

That he excels I’ll take your word
(although it’s more than I have heard)
in every virtue, every skill,
yet for a woman it must still
prevent a close relationship
to see his most unsightly lip.
You must forgive my saying so:
it isn’t pretty, as you know.  [4]

The lady rejected Ulrich for his cleft lip.  Oblivious to the lady’s cruelty, he underwent a painful operation to have his cleft lip joined.  Critical post-structuralists and ananavelist scholars have determined that the lady’s rejection of Ulrich on the grounds of his cleft lip figures and problematizes the prevalence of male genital mutilation in medieval European Christian culture.  More to the point, Ulrich served a heartless lady.

Ulrich enacted his loving devotion to his lady in various ridiculous ways.  In one joust, he damaged a finger.  After his lady expressed doubt about the seriousness of his wound, he had his finger cut off.  He sent the cut-off finger to his lady along with a poem praising her.  She responded to his messenger with a message of scorn:

Go back and tell him my regret;
he’d serve the ladies better yet,
were it not that his hand is shy
a finger. Tell him too that I
shall always keep the finger near,
buried in my dresser here,
that I shall see it every day,
and that I mean just what I say.

Tell him from me now, courtly youth:
I’ll keep the finger — not, in truth,
because my heart at last is moved
so that his prospects are improved
by a single hair. Make sure he hears
this: should he serve a thousand years,
the service I would always scorn.
By my constancy I’ve sworn.

Ulrich was delighted.  He thought that his lady continually viewing his amputated appendage was a sign that she loved him.  But women preoccupied with amputation of men’s appendages do not truly love men.[5]

Ulrich sought to please his lady by pretending to be a woman. He dressed himself as a woman, called himself Lady Venus, and traveled around Europe participating in dangerous jousting tournaments.  He was wounded in the chest and took at least one lance blow to the head.  While Ulrich was in a bathtub bathing a wound, an admirer showered him in rose petals.[6] Bodily wounds to men aren’t socially understood to bleed real blood.

One day, Ulrich’s lady summoned him to appear before her in secret.  She told him to appear in rags like a leper.  Ulrich raced to his lady to fulfill her summons.  He donned rags and ate with lepers outside his lady’s castle.  His lady forced him to sleep outside the castle overnight in the rough, in the rain.  The next morning he was instructed to wait until the evening.  That evening, as instructed, he laid in hiding outside the castle.  The castle warden making rounds took a long piss on him.  After more misadventures, he was finally pulled up with a bedsheet onto the castle balcony.[7]  Ulrich then declared to his lady:

Lady, grant me grace.
…
Lady, you’re my chief delight,
may I be favored in your sight,
may your compassion take my part.
Consider the longing of my heart
which constant love for you inspired.
Consider that I have not desired
a thing more beautiful than you,
a lovelier I never knew.

You’re dearer far than all that I
have ever seen. If I could lie
with you tonight then I’d possess
all that I’ve dreamed of happiness.
My life will gain by your assent
a lofty spirit and content
more and more until it ends.
It’s you on whom my joy depends.

That’s a courtly speech by a man drenched in piss.  Ulrich obviously hadn’t learned from Ovid.  His lady refused to lie with him.

Exploiting Ulrich’s inferiority in guile, his lady got rid of him with deceptive hand-holding.  She explained that she would do his will if he would re-enact his entrance and give her the opportunity to greet him as a lover.  That meant for him to get on the bedsheet and be lowered down slightly, and then brought up again.  Ulrich rightly was suspicious that she would let him down and never pull him up again. She offered to hold his hand as a good-faith guarantee.  Ulrich agreed:

Though worried, I then took my seat
inside the tightly knotted sheet.
They let me down a little ways
to where they were supposed to raise
me up. My sweet continued slyly,
“God knows, I never thought so highly
of any noble in the land
as of the knight that holds my hand.

“My friend,” she spoke, “be welcome so.
We both are freed from care and woe
and I can now invite you in.”
While speaking thus, she raised my chin
and said, “Dear one, give me a kiss.”
I was so overjoyed with this
I let her hand go free and I
quite soon had cause to grieve thereby.

They dropped Ulrich down and pulled the sheet back up over the wall.  Ulrich was in deep despair.  If not for his comrade’s intervention, he would have drowned himself in a dark lake.

Ulrich von Liechtenstein’s Service of Ladies is far more than a playful game.  Like the thirteenth-century Old French nouvelle The Three Knights and the Chainse, Service of Ladies represents the social construction of male disposability.  Men will not achieve gender equality until men reject a life of service to ladies.[8]

[3] Dr. Theophrastus Seuss’s One Fish, Two Fish, Red Fish, Blue Fish declares, “From there to here, from here to there, funny things are everywhere.”

[5] On pre-occupation with castration, see the discussion of the serranas stories in Libro de buen amor, note [8] and comparative criticism of the Old French works, Fisherman of Pont-sur-Seine and Lecheor.

[7] Stories of Virgil and Hippocrates being suspended in a basket from a women’s window are part of the literature of men’s sexed protests.  The summons for the secret meeting is ss. 1114-5; sleeping in the rain, 1168-70; getting pissed on, s. 1189.

[8] Classen (2004) emphasizes the theatrical, ludic element of Frauendienst.  But Frauendienst, like Pamphilus, has significance extending all the way to scholarly life today.  For example, a recent scholarly analysis of Frauendienst centered on the pleasures of ridiculing masculinity:

Ulrich’s lady openly mocks her male suitor, ridiculing his masculinity.  What pleasures does such mockery offer to male and female audiences?

Perfetti, Lisa. 2003. “‘With them she had her playful game’ The Performance of Gender and Genre in Ulrich von Lichtenstein’s Frauendienst.” Ch. 4 in Women & laughter in medieval comic literature. Ann Arbor: University of Michigan Press.

Thomas, J. W., trans. 1969. Ulrich von Liechtenstein’s Service of ladies. Translated in condensed form into English verse with an introduction to the poet and the work. Chapel Hill: University of North Carolina Press.