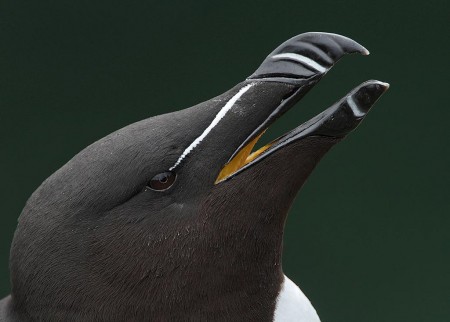 Sex differences in offspring relations are associated with sex differences in communication.  Male and female razorbill parents share duties of incubating the (one) egg and share duties of feeding the chick.  The chick leaves the nest when it has a body size about 30% of an adult.  The male razorbill parent then alone cares for the young bird at sea, feeding and protecting it.  Despite razorbills’ equal parental care at the nest, males are more closely connected to chicks communicatively:

males responded preferentially to their own chick’s calls and chicks responded preferentially to the calls of their male parent. In contrast, the playback experiments were not able to show any evidence of recognition between razorbill female parents and their offspring. Females responded infrequently to their chick’s calls and indifferently to the calls of strange chicks. Finally, we found that females only rarely vocalized to their chicks…. Male parents gave their strongest response to playbacks close to the time of fledging, when they were off the nest attempting to counter-call with their chicks. In contrast, females were never observed counter-calling with their chicks either on or off the nest. [4]

[3] For a summary of sex differences in chick-provisioning among monomorphic birds and scholarly explanations, see Table 1 in Elliott et al. (2010).

[image] Razorbill on the Isle of May, Firth of Forth, Fife, Scotland, 2010.  Thanks to Steve Garvie and Wikipedia.