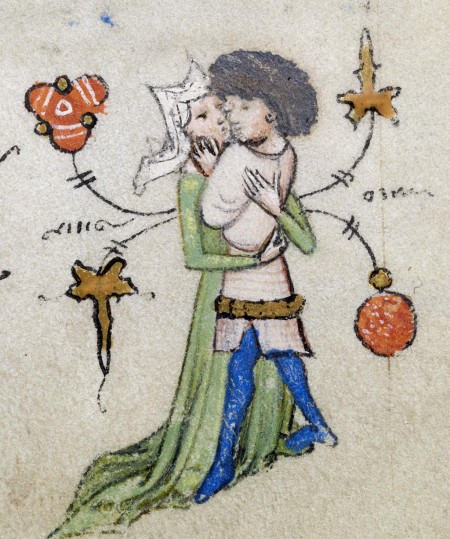 the stupidity of Bernabò and of all those other men who believe the same thing that he apparently did, namely, that when they go about the world, enjoying themselves with one woman here and another there, they imagine that the wives they left at home are just sitting on their hands.  Albeit things turned out well enough for Bernabò, we, who are born and grow up and live our lives surrounded by women, know what it is they really hanker for. [2]

Shrewdness, opportunism, and guile in pursuing earthly desires (ingegno) is prevalent throughout the Decameron.  Ingegno figures importantly in both the story involving Bernabò and the story Dioneo tells.  Rather than presenting a dispute about sexual symmetry, together those stories burlesque sexual symmetry as a generic convention.

In the day’s previous story, Bernabò and other Italian merchants were on a business trip in Paris.  Some of the merchants rationalized having extra-marital sex by believing that while they were on business trips, their wives similarly played around.  Bernabò did not express interest in an opportunistic sexual affair.  Moreover, he declared his wife’s virtue and her manly merits:

{Bernabò said his wife} possessed not just all the virtues that any woman should have, but even many of those that knights and squires must have. … it was impossible to find a squire or servant, as we would put it, who could wait at a gentleman’s table better or more skillfully than she could, for she was a model of intelligence, discretion, and good manners.  After this, he praised her for being better than any merchant at riding a horse, and at reading and writing and doing accounts.

Bernabò’s wife Madonna Zinevra was in fact chaste.  Moreover, she proved true Bernabò’s praise of her manly virtue.  In cross-dressed disguise, she distinguished herself in high-level manly service to the Sultan of Egypt.

The story involving Bernabò differs from an ancient Greek romance only in a few, significant details.  The story is largely derived from the literary tradition of romance and involves a typical courtly recognition scene.[3]  Boccaccio, however, substituted merchant men for the noble men in romance.[4]  In Boccaccio’s version of the tale, Bernabò’s fellow merchant Ambruogiuolo questioned Bernabò’s belief in his wife’s virtue.  Bernabò got angry.  His anger prompted him to accept a commercial deal. Ambruogiuolo proposed that he would attempt to seduce Bernabò’s wife.  If he succeeded, Bernabò would pay him 5000 gold florins.  If he failed, he would pay Bernabò 1000 gold florins.  They wrote up a formal contract to this effect and signed it.  Tests of fidelity are common in romance.  But in romance, those tests never entail a monetary exchange written up in a commercial contract.  Ingegno inserted into romance is a distinctive feature of the story involving Bernabò.

Dioneo’s story is generically a mirror image of the story involving Bernabò.  Dioneo’s story turns on a beautiful young woman being abducted at sea by a pirate.  That is a typical plot element of romance.  The rest of the story, however, is completely unlike romance except for a narrow aspect of sexual symmetry.

Dioneo’s story emphasizes the understanding of chivalry before the rise of European romances.  Before European romances turned chivalry into men’s self-debasement and self-harm in service to women, chivalry meant a man always being ready and capable of satisfying his wife sexually.  In Dioneo’s story, a beautiful, young woman named Bartolomea was married to wealthy old man, Messer Ricciardo.  Messer Ricciardo was a judge and a scholar.  He lacked virility and only barely managed to consummate his marriage.  He used honoring saints as an excuse to shirk his chivalric duty to his wife.

After the pirate Paganino abducted Bartolomea, he easily gained her warm affection with his sexual vigor.  Paganino, whose name suggests pagan, treated Bartolomea honorably, like a wife.  He lived with her in his home in Monaco.  Paganino evidently was a pirate who enjoyed ordinary domestic life.  One day Messer Ricciardo appeared in Monaco to attempt to ransom his wife.  Bartolomea espied him and informed Paganino of how she planned to deal with her husband.  Bartolomea, like Bernabò’s wife, could deal with difficult circumstances.

Bartolomea behavior was a model of ingegno.  When her husband Messer Ricciardo appeared, Bartolomea pretended not to recognize him.  Messer Ricciardo then asked Paganino for permission to speak with her in private.  Paganino granted that request on the condition that he “not try to kiss her against her will.”  Messer Ricciardo, judge and scholar, addressed his wife in the style of a man with his head in his chest:

“Oh, sweetheart, my soul mate, my angel, do you still not recognize your Ricciardo now, your Ricciardo who loves you more than life itself?  How is it possible?  Can I have changed so much?  Oh, light of my life, just take another little look at me.”

The lady started laughing and cut him off.

Bartolomea told him how much more active she and Paganino were:

we’re always at work together, giving the wool a good whacking day and night.  In fact, from the time matins was rung early in this morning, I can’t begin to tell you how much wool we’ve whacked since we did it the first time. … Paganino holds me in his arms all night long, hugging me and giving me little love bites, and God alone can tell you how he services me.

She ridiculed Ricciardo’s sexual inadequacy and his promises to do more:

You say you’ll make a really big effort.  But how?  By coming up empty after three feeble bouts and having to give it quite a whacking to make it stand up?  … Go away, and put all that energy of yours into just staying alive, for it seems as if you’re barely hanging on there, that’s how run-down and droopy you look to me.  … if you were squeezed till you were dry, they couldn’t get a spoonful of sauce out of you.  My life with you amounted to nothing but one giant loss, including both principal and interest, so next time I’ll go looking somewhere else for my profit.

That’s the mercantile mentality closely associated with ingegno.  Bartolomea then told her husband to get out and threatened to falsely accuse him of rape:

good-bye, and go away as quickly as you can, because if you don’t, I’m going to scream that you’re trying to rape me. [5]

False accusations of rape have long been a highly threatening tactic.  Messer Ricciardo left.  He shortly thereafter died from resulting sorrow and madness.  Paganino and Bartolomea then wed and continued to whack wool vigorously.  They had “a jolly life together, working away at it as long as their legs could support them.”

Paganino and Bartolomea’s relationship highlights sexual symmetry in sexual desire.  But their relationship isn’t romantic in the sense of the medieval literary genre of romance.  The story of Paganino and Bartolomea reconfigures the merchant-romance of Bernabò.  It also does more than that.  Like the Arabic tale of Aziz and Aziza, it burlesques ancient Greek romance.

[3] At the Sultan’s court, Madonna Zinevra, who had been pretending to be the man Sicurano, bared her breast to show that she is a woman.  Ambruogiuolo had hidden in a chest placed in her bedroom.  He collected a few things as evidence that he was there.  He also uncovered her naked in bed and observed “a mole under her left breast.”  The mole was “surrounded by a few strands of fine, golden blonde hair.”  Using these artifacts and observations, Ambruogiuolo falsely claimed to have seduced Madonna Zinevra.  Shakespeare used a similar device in his romance Cymbeline.

The story of Ricciardo’s rebellious wife is the crowning example of the ingegno that has occupied Boccaccio’s attention since Day I.  Here for the first time, in the abducted wife’s brilliantly reasoned attack on cultural taboos, ingegno is allied with ragione (reason), a normative concept that figures importantly in the Decameron.

It’s a matter of tit for tat: when an ass bumps into a wall, the wall bumps him right back.

Trans. Rebhorn (2013) p. 175.  As Dioneo’s burlesque of ancient Greek romances suggests, Boccaccio didn’t present Greco-Roman morality in the manner of a medieval moralist working for Cicero and the Emperor.