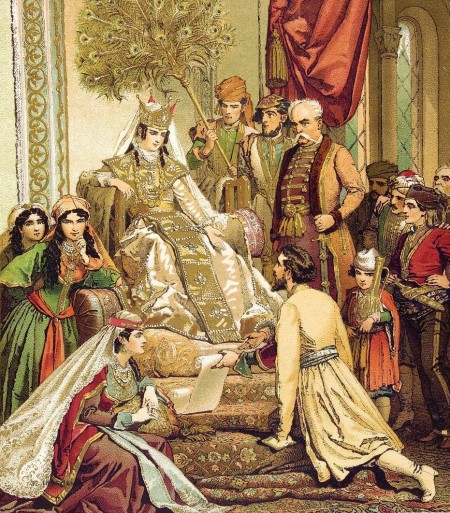 A great king counseled the noble knight Ruodlieb to marry only upon his mother’s advice. Ruodlieb’s mother advised:

We should desire, if you do, that we now call
our relatives and loyal friends together, that
with their advice and with their loyal help you can
find a woman to be your wife.

Tomorrow we will tell our friends and relatives
To gather here with us as quickly as they can.
If you think we should follow the advice that they
Give me, I will not fail to carry out your wish.

At that gathering to help Ruodlieb find a wife, Ruodlieb spoke “just as his mother had advised {genitrix sua ceu sibi suasi}.” Ruodlieb pursued marriage to please his mother. He was a leader among men, but a follower of his mother.

Ruodlieb entrusted his household to his mother for ten years. Because lords in his home realm weren’t favoring him, Ruodlieb decided to seek service elsewhere. Ruodlieb’s mother lived with him. Before leaving, he entrusted all his affairs to her. These actions occurred very early in the story.[2] The reader doesn’t know that Ruodlieb has no wife, no siblings, and his father is dead. Delaying narration of these details highlights the dominance of Ruodlieb’s mother in his life.

Ruodlieb could have entrusted his affairs to someone other than his mother. Other persons loved Ruodlieb and had long-term relationships with him. Ruodlieb left home with a squire who had served him from childhood. The house servants wept and groaned when Ruodlieb left. They joyously strained to catch first sight of him when they heard news of his return. Ruodlieb consulted loyal friends and relatives about seeking a wife. He could have entrusted his affairs to one of them. Instead, Ruodlieb burdened his aged mother with his affairs.

Ruodlieb’s emotional relationship with his mother mattered more to him than his position in broad networks of men. While in service to a foreign king, Ruodlieb received a message from his “dear mother {dilecta mater}.” The message had two parts. The first part was from Ruodlieb’s home lords. It explained Ruodlieb’s current standing among men, the need for his skills, the fall of his enemies, and possibilities for remuneration. The second part of the message was his mother’s emotional appeal to him:

My darling son, remember your unhappy mother
whom, as you know, when you departed you deserted
both unconsoled and widowed by a double cause:
once by your father, the second time by you, my son.
As long as you were with me, you eased all my woes;
when you departed, though, you multiplied my sighs.

That’s a claim for sympathy with a thrust of shaming. Ruodlieb’s mother’s suffering was his fault. His mother claimed the moral high ground:

However, I decided I could bear it somehow,
provided you could live your wretched life safe from
so many enemies who were so strong and fearsome.
Because they all have now been maimed or killed,
dear son, return, and bring your mother’s grieving to an end.

But in the end his mother made clear it wasn’t just about her:

By your arrival gladden all your relatives,
not only them but all your countrymen as well.

Ruodlieb didn’t react to his lords’ message. He cried “for his lonely mother {pro sola matre}.” He grieved for her intensely. Showing the message to the king, Ruodlieb described it as deeply disturbing. He evidently wasn’t referring to his lords’ praising him and welcoming him to return. The king understood Ruodlieb’s focus, but described it much differently: “the message from your mother is extremely pleasing {Atque tuae matris nimis est legatio suavis}.”[3] The king released Ruodlieb to go home to his mother. That Ruodlieb was also going home to his lords hardly mattered.

The emotional intensity of Ruodlieb’s relationship with his mother is evident in his interaction with his mother’s goddaughter. She, a widow, looked to Ruodlieb for romance. He felt no passion for her. But he passionately sought information about his mother (her godmother):

The goddaughter in response pushed the emotional level higher:

Ah me, what have you said? Do you think she has wed,
For whom her life has lost its sweetness without you?
For she has lost her vision from her tears for you.

Ruodlieb in response wept. This scene, like similar scenes in the late-eighteenth-century English literature of sensibility, encourages personal characterization and identification. Almost everyone knows what it feels like to love one’s mother.

The knight Ruodlieb went to the table and sat down …
He did not wish to sit up at the head, however;
but like a guest sat humbly on his mother’s right,
and gladly he gave her complete authority.
Respectfully he took that which she gave to him.
She cut the bread and passed it out to all the group,
and passed to everyone a dish of special foods;
she sent around a bowl of wine, and sometimes mead.

Compared to the wisdom the king gave Ruodlieb, Ruodlieb’s mother’s counsel would have been more suspect to medieval listeners. His mother portrayed the ravages of old age for a woman. Among its evocative descriptions, her portrait described effects of aging on a woman’s hair:

The golden-colored hair that once hung to her buttocks,
bound up in separate braids and covering her back,
sticks up grotesquely, terrible to see, as if
her head had just been drawn, ass first, through shrubbery.

Ruodlieb’s mother then declared that “age overcomes an agile man as it does woman {Sic agilem iuvenem senium domat ut mulierem}.” Her portrait of an old man ends with his plea for death:

Death, you who are alone the end of human woes,
why do you come for me so late? Why do you not
release me from my prison?

These paired portraits are highly literary and highly exaggerated. They seem to occur in the context of urging Ruodlieb to marry. Presumably his mother wanted him to marry a young woman before he got too old. But Ruodlieb earlier saw the loving marriage of a young man and an old woman. Compared to his mother’s words, the king’s wisdom was less rhetorical. Its validity was also realized in the course of the narrative. Moreover, the king provided wisdom as a chosen gift. “Ruodlieb’s mother did not cease giving him her frequent warnings {Non cessat mater Ruotlieb minitare frequenter}.”[9] Frequent warnings tend to have the value of nagging.

The mother of that Ruodlieb, as best she could,
helped Christ’s unfortunates: the widows, orphans, pilgrims,
and thus she merited that Ruodlieb be greatly blessed.
For Christ revealed to her how he would glorify her son.

Ruodlieb’s mother was herself a widow and earlier lamented her misfortune in her son’s absence. That has no narrative relevance here.

The revelation to Ruodlieb’s mother indicated that Ruodlieb would become a king, marry, and receive greater honors. Information from a captured dwarf apparently confirmed that revelation. Ruodlieb’s mother remained humble and didn’t credit herself for her son’s forthcoming good fortune. The last words of Ruodlieb’s mother in the surviving text are pieties about giving thanks to God.[11] Earlier concern and wonder about Ruodlieb’s relationship with his mother are eliminated in the end.

Matriarchy is both subtle and beyond challenge.

The greater king’s counsel to defer to mother is at V.487, p. 125. Despite his subservience to his mother, Ruodlieb wasn’t a homebody. He won a major military victory in foreign service as commander-in-chief of the great king’s army.

[6] Ruodlieb XIII.35-60 (breaking open both loaves in private with his mother). Gold and jewels were hidden in what appeared to be loaves of bread. The king instructed Ruodlieb:

Do not break open these two loaves, my dearest man,
until you reach your mother, whom you love so dearly.
Then in her sight alone break the smaller loaf.
When sitting at your wedding with your bride, break the next.

[8] Ruodlieb XV.58-60, p. 185. Release from prison has been a common, broad rhetorical figure throughout literary history.

Remember, son, how often in his goodness God
has helped you and has rescued you from death itself,
and that He often helped you when you were in exile,
and let you come back to your homeland safe and wealthy.
I know that now you will obtain still greater honors,
but I fear very much to say the Lord has thus
rewarded us for ever doing anything
which has pleased Him — my son, beware of saying this!
What could we do, who have nothing but what He gives?
But whether you fare well or badly, give Him thanks!

Ruodlieb’s mother earlier was a much more subtle, complex character.

Galbi, Douglas. 1996. “Through Eyes in the Storm: Aspects of the Personal History of Women Workers in the Industrial Revolution.” Social History 21(2): 142-59.