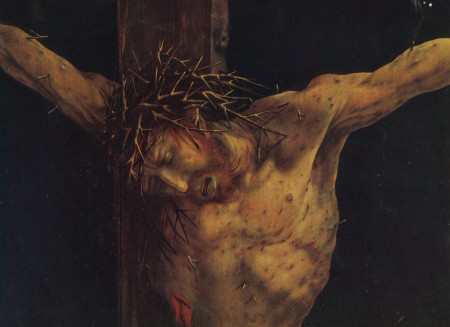 Late in the thirteenth century, Matheus of Boulonge married the widow Petra. Matheus suffered double punishment for his marriage. Because the Council of Lyon in 1274 tightened regulations on clerics marrying, Matheus’s marriage destroyed his church career. Petra delivered a second blow by destroying his personal life. Matheus began referring to himself as Matheolulus — little, little Matheus. Despite Matheus’s reduced stature (his name is commonly reduced only to Matheolus in modern literary study), he retained enormous wit. Matheolus’s suffering from the rule of mother church and his wife prompted him to write Lamentationes Matheoluli. That work is a masterpiece of medieval Latin literature of men’s sexed protest.

While most men are rightfully fearful of criticizing women, Matheolus dared to criticize Christ himself. Matheolus in a dream declared:

Allow me to say — it’s on the tip of my tongue —
it may be too bold — Christ, you don’t dare
to get married. Why? Because you supposed
that if you married, you would be expelled from paradise.

Christ, however, had no need of marriage because he was already united to divinity. Ordinary men, in contrast, need marriage to provide for salvation and union with the divine. Christ in Matheolus’s dream explained:

Look, I don’t want sinners to die. I’m their redeemer.
I fought for them. When you’ve paid a lot for something
you don’t just throw it away, and so I’ve decided
to make several purgatories for them to
purge themselves in — treatment makes sick people better —
and the best one is marriage. You’ve already experienced punishment.
I needn’t reopen it; rather, I’d say that even those toasted
on a flaming gridiron don’t suffer as much punishment as
those who are imprisoned in marriage.
There is no greater martyrdom than the day-to-day
punishment like yours, refined in the furnace of marriage.
You are truly a martyr, and so if you take your suffering well
have no doubt that after you die you’re coming straight to me.
Nothing will stand in your way, no punishment will intervene.
Why? Because you have already been purged under your wife.

It’s necessary and right for cities and towns to be replenished
with babies. If male hadn’t joined with female,
now there would be no religious orders, nor Peter being keeper of the keys.
Therefore would the clergy please stop contradicting me on this?

The clergy of Talavera with all their heart and soul and might strove to obey such urging.

Matheolus represented his own marital suffering in devotional and liturgical contexts. In the Christian liturgical week of Christ’s passion, the three days preceding Easter in medieval Europe included Tenebrae service. That’s a service of darkness and lamentations. Matheolus in marriage experienced Tenebrae daily all year long from his wife:

Litany, the word of God, and the Mass she changes,
and sings Tenebrae to me daily from her own composition.
She curses on every canonical hour,
cries and brawls, never holding back her reins.
My wife daily chants every one of her hours for woman.
The first response is growling, singing darkly.
Then begins the antiphon: “Woe, woe, woe to you husband!”
or there are her lamentations or her quarrelsome songs.

The high culture of Latin and church liturgy became for Matheolus a rich resource for protesting his suffering in marriage.

No rest for the husband, when night and day he is chosen
fifteen times for the passion. He is continually crucified.
Thus it is, my god Hercules! The torment of marriage
is far worse than the torment of the Stygian abode.

Matheolus’s lament alludes to the common medieval view of sexual deficit accounting. In that accounting, women when widowed became sexually voracious. Experiencing the passion refers in part to Matheolus’s responsibility to have sex with his wife.

Experiencing the passion fifteen times daily also suggests extreme devotion to Christ’s crucifixion. St. Francis of Assisi in the twelfth century made prominent the Stations of the Cross. In that devotion, the faithful represent Jesus’s condemnation, crucifixion, and burial through fourteen stages of visual representations, narratives, and prayers arranged around a church. Matheolus described his suffering as a crucifixion that occurred daily with one more stage than the Stations of the Cross.

Matheolus in his spirituality of marital suffering encompassed Greco-Roman traditional religion. The ejaculation “It is, my god Hercules!” starts with a statement of being that could be interpreted as a parody of the Mosaic god’s name “I am.” “My god Hercules” was a traditional Greco-Roman invocation that Jews and Christians would associate with following a false god. The Stygian abode similarly was the non-Christian, Greco-Roman underworld. Marriage had become a sacrament in the Christian church by the thirteenth century. In his invocation of god and by describing marriage as far worse than being in the Greco-Roman underworld, Matheolus was playing with Christian heresy.

Matheolus also protested against marriage in economic and legal terms. The conditions of Matheolus’s marriage naturally caused him to lose sexual potency. Unlike in marriage today, spouses in medieval Europe had a legal obligation to have sex with each other even if one of them didn’t want sex. That legal obligation was known as the marital debt. Matheolus lamented:

My wife wants it, but I can’t. She petitions for her right.
I say no. I just can’t pay.

Even given his sexual incapacity, Matheolus’s wife Petra sought for him to be bodily punished:

Acting as her own advocate, Petra puts forward
the law that if a destitute shriveled sack can’t
pay, under statute recompense for that injury is corporal punishment.

A fundamental principle of communication economics is the criminalization of men in relation to women. In this civil case, the injury wasn’t the effect of Petra and Matheolus’s marriage on Matheolus’s genital function. The injury was depriving Petra of sex that Matheolus was required under law to provide non-consensually and regardless of ability to pay. Modern readers should be able to find some appreciation for Matheolus’s sexed protest.

[1] Matheus of Boulogne (Matheolus), Lamentations of Little, Little Matheus {Lamentationes Matheoluli} l. 2393-7, from Latin, my translation, benefiting from that of Correale & Hamel (2005) p. 392. The Latin text is available in Klein, Rubel & Schmitt (2014) (preferred) and Van Hamel (1892). Jehan Le Fèvre loosely translated the work into French late in the fourteenth century. The English quotations above are exclusively based on the original Latin version.

[2] Lamentationes Matheoluli l. 3024-38, from Latin trans. Correale & Hamel (2005) p. 392, with some minor changes. The claim that marriage works like Purgatory is taken up in the 15 Joys of Marriage. Matheolus dreamed that, in recognition of their martyrdom in marriage, husbands earned a higher place in heaven than virgins and any conventional martyrs. That reversed common Christian understanding of holy status. Jerome influentially described the Christian status ranking in his work, Adversus Jovinianum. Matheolus is awaken from his dream by his wife’s nagging (l. 372-3767). The subsequent quote above is from l. 3515-18, trans. id.

[4] Lamentationes Matheoluli l. 341-4, my translation. Here’s discussion of medius fidius as an oath/interjection to Hercules. The translation in Correale & Hamel (2005), p. 386, flattens the allusions and pagan references:

There is no rest for the husband, fifteen times a day and night passion is his lot; his is tortured continually. I swear, marital torment is a lot worse than the torment of hell.

Matheolus is far more interesting than merely as a source for Chaucer. Matheolus apparently also was a source for the 15 Joys of Marriage, written in French about 1400. More importantly, Matheolus’s text itself rewards careful study.

[5] Lamentationes Matheoluli l. 577-8, trans. Correale & Hamel (2005) p. 388, modified slightly. The medicalized condition “erectile dysfunction” now supports highly profitable pharmaceuticals. The implicit biological norm seems to be that a properly functioning man should in the presence of a woman be able to get an erection on demand. Such medicine can abuse masculine biology like attention deficit medicine can abuse boys’ natural level of activity. The subsequent quote above is from id. l. 582-4, trans. id. I’ve brought out the legal terminology obscured in the translation.

[6] Mann (2002) pp. 28, 40. Among the rare scholarly works that mentions Lamentationes Matheoluli, it is commonly characterized as “antifeminist.” An anthology of texts declared:

Le Fèvre’s version {of Lamentationes Matheoluli} proved an effective propagation of the satire, ensuring that “Matheolus” continued to be a name to match Jean de Meun’s for brutal antifeminism in fifteenth-century debates about women.

[7] After referring to the “monstrous bulk of antifeminist literature in the Middle Ages,” Mann added a footnote explaining:

Since I have recently encountered some misunderstanding of the term “antifeminism” among non-medievalists, I had better make clear that medievalists have traditionally applied it to literary expressions of hostility to women, and not hostility to feminism (which would clearly be anachronistic).

[image] Christ’s passion, detail of Isenheim Altarpiece. Painted by Matthias Grünewald in 1512–1516. On display at the Unterlinden Museum at Colmar, Alsace, in France.