Humans’ emotional friendship with dogs has been regarded as a modern development. The saying “If you want a friend in Washington, get a dog!” has been well-known only since the late twentieth century.[1] The more general claim, “if you want a friend, buy a dog,” is attested in print from 1911. The slightly different claim that a dog is man’s best friend is attested only from 1789.[2] The Oxford English Dictionary explains:

Before the eighteenth century, dogs other than the disdained lap-dog were usually kept not as household pets but for hunting, working, or guarding, and the language used to describe them often reflects this. In the oldest proverbs and phrases dogs are rarely depicted as faithful or as man’s best friend, but as vicious, ravening, or watchful. To throw or cast someone to the dogs (from 1556) is to send them to destruction or ruin, as is the later and now more common to go to the dogs (from 1619). [3]

That explanation is misleading. In literary fact, humans’ intense friendship with dogs has a long history. Within circumstances of betrayal in domestic human relations, medieval Latin literature from no later than the year 968 figured a dog as the preferred choice for a man’s friend. 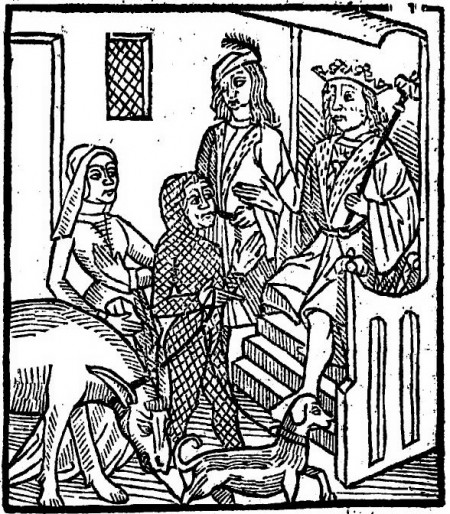 Friendship with a dog occurs in medieval Latin literature within a framing narrative of domestic betrayal. In a dog-friend story recorded in Latin in 968,  young men plotted to kill their fathers. The young men wanted freedom to pursue their desires without the constraint of their fathers’ views. One of them didn’t kill his father, not because of love, but out of fear. The young man and his wife hid the man’s father in their home. Whenever the king asked for advice, the man consulted his hidden father and got the advice from him. Through the goodness of his father’s advice, the man became an eminent counselor to the king. His friends then began to envy him. They plotted to put him death. Thus sons betrayed fathers, and friends betrayed friends.

The young man chose a dog to be his friend before the king. Apparently setting up the young man for a charge of betraying the king’s order, the king ordered the young man to appear before him with only one servant, one friend, and one enemy.  The young man was confused and terrified. He consulted his father. His father advised:

You have a fine donkey: take him with you laden with bread, wine, and meat. You have one little she-dog well-trained to defend your property: take her with you. Take also your wife along with you. Offer the donkey as your servant, the dog as your friend, and your wife as your enemy. [4]

The donkey in the role of servant suggest the difficulty of finding an obedient human servant. The wife as enemy suggests men’s anguish at perceived betrayal by their wives. The choice of a dog as a friend contrasts with the friends who sought the young man’s life.[5]

A version recorded about 1190 includes effusive praise of the dog as “my best friend.” The young man declared to the king:

My dog symbolizes my best friend. He goes with me wherever I go and does not fear the danger of rivers, the knives of bandits, and the teeth of wild beasts. He even despises death for my sake. Often he returns from hunting with noble spoils of the chase for me and my guests; never happy without me, never sorrowful with me. Certainly, O King, I could never find another friend so pure and faithful. I think not even you could be such. [6]

Humans domesticated dogs before they domesticated any other animal or plant. A puppy was found buried in the arms of a human under a home 12,000 years old. Attachment between a human and a dog seems to use the same biological pathways as attachment between humans.[7] A man regarding a dog as his best friend probably occurred long before the earliest text of such a relationship in surviving literature.

Domestic relations provide humans with both comfort and anguish. If you seek a servant who will never complain, get a donkey. If you cannot endure any fear that your spouse might betray you, don’t get married. To have a friend who surely will not speak against you, get a dog.

[1] That claim is commonly attributed to Harry Truman, the U.S. president from 1945 to 1953. There’s no evidence that Harry Truman said it or wrote it. Moreover, Truman wasn’t fond of dogs. See the Quote Investigator’s article on “want  a friend in Washington, get a dog.”

[3] The ninth-century Latin poem “The Wrangle of the Dwarf and the Hare” recounts a fierce hare overcoming a dwarf and a “timid whelp.” The hare recalls “the injuries done to its people by men and swift dogs.” Trans. Ziolkowski (1993) pp. 303-4. Sedulius Scottus’s mid-ninth-century Latin poem “The Ram” describes dogs viciously attacking a lovable, voluble ram. Trans. id. pp. 262-5. In contrast, Thierry of St. Trond’s twelfth-century Latin poem, “Weep, Dogs” laments the death of Pitulus,a “beloved dog.” Pitulus was a small, weak dog loved for his ability to generate laughter. Trans. id. pp. 272-3. Pitulus is like a lap dog, not like a man’s best friend. Walker-Meikle (2012) provides considerable documentation of dogs as medieval pets. A dog being a man’s best friend is different from a dog being a pet. For example, the Italian poet and orator Andrea Navegero, who lived from 1483 to 1529, eulogized his dog Borgettus as a dog who “loved his master as a two-year-old girl would love her mother.” Id. p. 98. The British Library’s medieval manuscripts blog describes dogs as medieval man’s best friend, but doesn’t provide a specific textual attestation.

[4] The story is recorded in a sermon of Ratherius (Rather of Verona), Sermon on the Octave of the Pasch, CC Opera Minora 171-76, from Latin trans. Reid (1991) pp. 510-11. The Latin text is available online in Patrologia Latina, vol. 136 and through the Corpus Corporum website. Rather of Verona experienced throughout his life tense personal relationships and betrayal. Van Renswoude (2010).

In ancient Greek myth, Hypsipyle hid her father Thoas while the other Lemnian women killed their husbands and fathers. See, e.g. Pseudo-Apollodorus Bibliotheca 1.9.17.

Where can I find a better actor than my little son? Every day he puts on new shows. When he tries to imitate what he sees or hears, he uses comic gestures. He stammers words which he cannot handle properly, and when he cannot say at all what he is thinking, he illustrates it by signs and motions of the body. One moment he is gay, and the next moment he is sad. He cries and laughs, not deliberately as other actors do, but simply as nature and his youth compel. For all this he asks no reward.

Trans. Gilliland (1981) p. 53 (senex, the story of the third wise man). The story is set in ancient Rome, and the description of the actor is that of a Roman pantomime.

Van Renswoude, Irene. 2010. “The Sincerity of Fiction. Rather of Verona and the quest for self-knowledge.”Corradini, Richard, ed. 2010. Ego trouble: authors and their identities in the early Middle Ages. Wien: Verlag der Österreichischen Akademie der Wissenschaften.