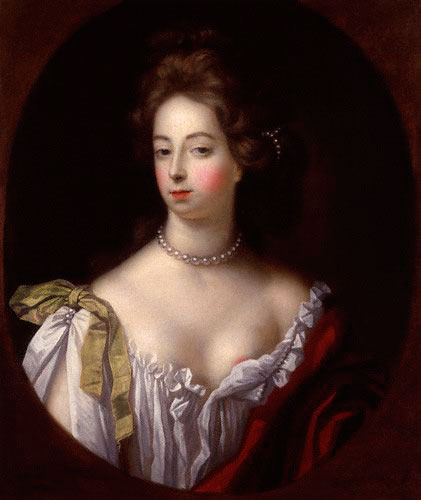 In the twelfth-century French tale Richeut, the title character Richeut is a mistress of harlotry. Frustrated with her insufficient earnings from whoring, Richeut plots to get pregnant to extract more money from men. She drinks mandrake and hellebore and has sex with many men. She succeeds in getting pregnant.

Richeut then goes to one of her lovers, a priest. She cries, sighs, and complains. The priest comforts her:

The gentleman {priest} puts his arms around her neck and kisses her softly. Richeut squirms out of his embrace, bursts into a torrent of tears, and speaks her threat: “Whether I tell you or I keep silent about it, I’m pregnant because of you.” [1]

Men lack women’s natural, true knowledge of who are their biological children. While the priest had sex with Richeut, neither he nor she knows which man contributed to the pregnancy. The priest says to Richeut:

Richeut, I don’t believe you; do you really believe it’s mine? Certainly not.

I know full well that it is; may I lose everything, may I fall silent and be put to death, if I didn’t solemnly swear that you put into me that thing which made me fat and pregnant. Don’t think I’ll dump it in some ditch or in a monastery, if you refuse to help me.

Rather than arising merely from the skill of particular, deceiving women, paternity fraud is now institutionalized in government and hospital procedures for establishing paternity. The priest foolishly acquiesces to Richeut’s paternity claim:

By my faith, Richeut, I promise you that if you desire anything of mine, I shall keep nothing that you might not have for yourself. Why would you blackmail me, or have the bishop bar me from saying Mass? Now, hide this pregnancy for as long as you can, and when the child is born, blame it on someone else. So help me God, I shall not fail you in this, not one jot.

Richeut then cries a little and tells the priest that she loves him. He then gives her money and goods and promises her more.

Richeut repeats her paternity fraud with the knight Lord Geezer. She aggressively confronts him:

I am seething with anger when I see you. You pledged your faith to me and you lied. Any woman who puts her arms around you must be out of her mind. There’s no one as stingy as you from here to Lincoln. What did I get from you once I gave you pleasure, the other day (alas!) in bed? A curse brought me to lie down flat under you! A pox on your root that shoots off and dries up! I was a young girl then, and now no one cares to love me. You have knocked me up, and I do not care to hide it. I’m angry with you! Look at my belly swelling up! It won’t be long until I have a child. You’ve got to help me. So help me God, if you deny it’s yours, it will be your ruin! I say it in earnest. No matter how fortified, all your castles shall be burned and reduced to ashes unless you acknowledge your offspring. I’ll sooner burn or hang myself — I tell you no lie — than let you go free. I come from a good family! I have seven knights among my relatives. And I have friends that would slay their man in no time.

The knight foolishly accepts Richeut’s claim that he caused her pregnancy. He gives her money and a kiss, and promises to send her meat, vegetables, and fine wine.

Richeut also repeats her paternity fraud with a townsman who didn’t have a heir. He thinks he is biologically unable to have children. Richeut goes to him and asks to have a private conversation:

They go into the room together and sit down on a bed. Sitting there, Richeut looks pensive, then says, “Sir, I came her because I was pushed by a desperate need. I’ll be honest with you. I have a complaint to make, and you yourself are the cause. For the time is not long when I shall enter into labor. Sir, I’m incensed at you because you made me pregnant!”

At first the townsman, who thought himself to be sterile, stands up to Richeut:

“I? You must be joking!”
“This is no joke, sir, by Saint Thomas!”
“Without doubt, Richeut, you told a lie.”
She cries and whines, and holds her hand to her face: “Sir, don’t you recall the entire day that you played hanky-panky with me upstairs?”
“Yes, Richeut, that much I know.”
“Without a doubt, dear sir, that is where I got this burden.”
“Shut up, Richeut, don’t ever say it!”
“May God confound me if I keep silent about it!”

The townsman’s fantasy of having a male heir prevailed over his reason:

“Richeut, I don’t know — I may well be the father. Let him be mine. If it’s a boy, without fault, he’ll inherit everything I own.”

He gives Richeut much money and arranges to have her sent meat, wine, and bread.

Richeut herself benefits greatly from money she extracts for “child support.” From pregnancy to long after the birth of her son Sampson, Richeut enjoys child support in the form of “meat, wine and claret, pepper sauce, fruit, cakes, pastries, and apples.” Because she cannot bear Sampson’s wailing, she hires another woman (a wet-nurse) to breast-feed him. Her lavish child-support income prompts her to raise her price as a whore. It also makes her an attractive marriage prospect for men seeking to avoid the burden of having to earn money for their family.

Richeut’s child-support fraud devastates the men of the three estates. Richeut flatters the knight with tales of his manly and fearless son Sampson, who, she says, is just like him. She tells the trade-oriented townsman that Sampson “counts like an angel.” She tells the priest that Sampson loves learning (priests were the leading scholars in the Middle Ages). Socially vulnerable and proud false fathers, the men of the three estates give all they have to Richeut for child support:

Richeut has blackmailed the priest so much that he now has only a grayish coat on his shoulders. And he’s wearing nothing under the wool! As for the townsman, she’s after his banking business. And she has threatened, flattered, and begged the knight so much that he has pledged her everything, both land and fief.

Just as child support today isn’t required to be spent supporting children and in fact supports mainly interested adults, “Richeut takes and spends lavishly on herself — for the boy {her child Sampson} doesn’t spend money!” Her three lovers as a result live in poverty.

Richeut’s son Sampson grows up to be sexually voracious and highly skilled in seduction. Because the priest, the knight, and the townsman are languishing in poverty and despair, Sampson rejects them.[2] Richeut raises her son herself. She teaches him Ovid’s love lessons. She teaches him additional lessons on flirting and techniques for sexual intercourse. Sampson is a good student. He masters the “summa of lechery.” In travels spanning from Ireland to India, Sampson has sex with thousands of women. The only person more skilled than he in sexual seduction is his mother.[3]

Richeut provides potent satire of paternity establishment and child support in today’s high-income democracies. The outrageous deceptions that Richeut perpetrates are now institutionalized in laws and policies. Stories like Richeut are now summarily rejected from broad public discourse. They are labeled “offensive” and “anti-feminist” because they challenge deeply entrenched injustices against men.

[1] Richeut l. 170-5, from Old French trans. Haddad (1991) p. 8. All subsequent quotes above are from id. Since Richeut is relatively short and the quotes follow the order of the text, further specific line numbers and pages are omitted. For an alternate English translation and the French text, Ker (1976). The French text of Lecompte (1913) is freely available online. The current best French text of Richeut is Vernay (1988). Richeut is thought to date from the last third of the twelfth century. Arlima offers a comprehensive bibliography for Richeut.

In its brutal  satire and depiction of low duplicity, Richeut is thematically related to Trubert and Le Roman de Renard. Richeut has a woman servant / friend named Hersant. Richeut and Hersant are the names of the wives of the fox and the wolf, respectively, in Le Roman de Renard. Disparagement of prostitution in Richeut associates it with the sayings of Marcolf in Solomon and Marcolf.

[2] Sampson asks his mother who his father is:

Tell me now, mother dear, which one of these three is my father?

Dear son, I don’t know. I have mated with each of the three, and with a thousand others. I am not ashamed to tell you. How can a woman that’s been mounted by this kind of population be expected to keep count of her children? One doesn’t know from whom she conceives nor when. Just go to the richest of the three. Take your pick.

Sampson responds, “Mother, I don’t want any of them.”

[image] Nell Gwyn. Painting by Simon Verelst c. 1680. Nell Gwyn (1650 – 1687) was a comic actress and long-time mistress of Charles II. She regarded herself as a whore. Image thanks to Wikipedia Commons, and no thanks to the rapacious, reactionary U.K. National Portrait Gallery.

Lecompte, Irville Charles. 1913. “Richeut, Old French poem of the twelfth century, with introduction, notes, and glossary.” Pamphlet reprint of the article in The Romanic Review 4(3): 261-305.