A Nobel-Prize-winning British scientist was recently fired for making jesting comments that some misconstrued to be words disparaging women scientists. Even in more tolerant medieval Europe, merely printing in English words of Socrates disparaging women was a dangerous business. Medieval Latin offered relatively favorable freedom of speech. Men writing in Latin could protest against gynocentrism, cry out about injustices against men, and criticize women’s behaviors. Medieval Latin freedom of speech is poignantly represented in medieval macaronic texts that switch to Latin to express men’s sexed protests. Medieval Latin subverted dominant vernacular discourse about women with the declaration cuius contrarium verum est (of whom the opposite is true).

Now say well by women or else be still,
for they never displeased man by their will;
to be angry or wrathful they have no skill,
for I dare say they think no ill.
Cuius contrarium verum est. [1]

Medieval macaronic texts used Latin to express men’s sexed protest in the context of the politically foundational story of the Trojan War. The first book printed in English was William Caxton’s Recuyell of the Hystoryes of Troye, printed in Bruges in 1473. Caxton’s patron was Lady Margaret, who had far more power and privilege than almost all men. Caxton described obsequiously how she learned of the first part of his translation, and how she commissioned him to continue:

the right high, excellent, and right virtuous princess, my right redoubted Lady, my Lady Margaret, by the grace of God sister unto the King of England and of France, my sovereign lord, Duchess of Burgundy, of Lotryk, of Brabant, of Limburg, and of Luxembourg, Countess of Flanders, of Artois, and of Burgundy, Palatine of Hainault, of Holland, of Zealand and of Namur,  Marquesse of the Holy Empire, Lady of Frisia, of Salins and of Mechlin, sent for me to speak with her good Grace of various matters, among which I let her Highness have knowledge of the foresaid beginning of this work, which anon {she} commanded me to show the said five or six quires to her said Grace; and when she had seen them anon she found fault in my English, which she commanded me to amend, and moreover commanded me directly to continue and make an end of the remainder then not translated; whose dreadful commandment I dared in no way disobey, because I am a servant to her said Grace and receive of her a yearly fee and other many good and great benefits (and also hope many more to receive of her Highness) [2]

Greeks fought against the Trojans in the Trojan War. More personally, men killed other men for the sake of sexual access to women. Paris wanted Helen, who was married to Menelaus. Agamemnon gave up Chryseis, who was sleeping with him, and then sought Briseis, who was Achilles’s lover. And so on and so on, dead men and more dead men. Lady Margaret’s support for Caxton’s work on the Trojan War suggests that she, like eminent women writers of the Middle Ages, had loving concern for men.[3] 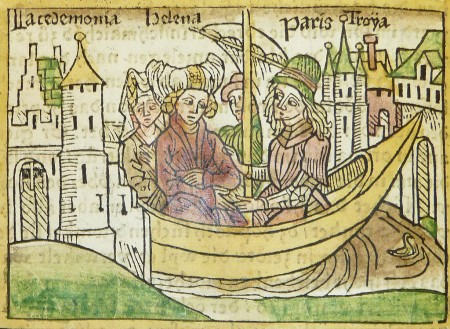 Caxton’s version of the Trojan War is relatively sympathetic to Helen. Helen in Caxton’s version is not merely the most beautiful woman in Greece, but the most beautiful woman in the world. Moreover, she is depicted as curious. That indicates intellectual agency. Caxton’s version doesn’t presume that Priam raped Helen. It depicts Helen as having strong, independent sexuality. In Caxton’s version, Priam returns Helen to the Greeks. The Greeks planned to burn Helen at the stake. However, Ulysses intervened with eloquent words and saved her.[4] Homer was a preeminent teacher of ethics in Greco-Roman culture. Odysseus / Ulysses was one of Homer’s great heroes. Caxton’s version of the Trojan War, at least in its main text, instructed men to act like Ulysses in defending Helen against punishment for her part in the destructive Trojan War.[5]

all accord in conclusion with the general destruction of that noble city of Troy, and the death of so many noble princes, and likewise kings, dukes, earls, barons, knights, and common people, and the ruin irreparable of that city that never since was re-built; which may be an example to all men during the world how dreadful and dangerous it is to begin a war and what harms, losses, and death follow. [6]

Expressing concern for men’s deaths, or even just concern for violence against men, is unusual. But the expected response is apathy.

In the hope of contributing to a renaissance of medieval Latin freedom of speech, here is Caxton’s Latin epilogue, with an English translation:

I want to weep for Troy, which fell to the Greeks only by the will of fate
that was captured only by deceit and to the ground razed.
A destructive harlot was the cause of such an evil —
a female lethal {Helen}, a woman full of evil.
Even if you {Helen} are washed, if your whole life is good
you still will not be unknown nor without mark of disgrace.
Only just bent to Paris’s will, only just, and Theseus’s long ago,
would you agree to avoid a relapse into the same vice anew?
The tale of old shall cause the future to be feared:
the same inequities of yesterday can befall the world tomorrow.
Why do you escape from the stage, you who hand over all others to death?
Why don’t you, gathering of destruction, fall in ruin?
This woman who deserves death, is loved anew with the love of before
and returned to the victor and the delights of the couch.

[1] From fifteenth-century English lyric printed in Salisbury (2002), Select Secular Lyrics of the Fourteenth and Fifteenth Centuries. I’ve modernized the English for greater accessibility. Id. mistitles the poem Abuse of Women. The poem would be more appropriately titled Repression of Men’s Sexed Protest. For a tendentious interpretation of the poem in support of current dominant ideology, Kazik (2011).

[2] William Caxton’s preface to Recuyell of the Hystoryes of Troye (Recuyell {collection} of the Histories of Troy), from Eliot (1910) pp. 6-7. I’ve modernized the English. Recuyell of the Hystoryes of Troye is Caxton’s translation into English of Raoul Lefèvre’s French text Recoeil des histoires de Troyes, written in 1464. In addition to printing his English translation, Caxton also printed Lefèvre’s French text.

[3] Virgil’s Aeneid describes how the Trojan warrior Aeneas fled from Troy when the Greeks overran it. In Virgil’s epic myth, Aeneas traveled westward and eventually founded what become the Roman Empire. Medieval rulers in England, Burgundy, and France claimed direct descent from Trojan heroes. In 1477, Margaret’s husband Charles I died in battle against France and the Burgundian kingdom collapsed. Coldiron (2014) pp. 40-2, 46. Margaret was probably well aware of the violence that her husband faced. She may also have courageously opposed devaluation of men’s lives.

[4] Characteristics of Helen in Caxton’s Recuyell of the Hystoryes of Troye:

[5] Late in the fifteenth century, Margery Wellysborn signed her name to the flyleaf of the copy of Recuyell of the Historyes of Troye now in the Royal College of Physicians, London. In addition, she wrote “most special in my mind without any” (modernized English). See Wang (2004) pp. 187-8.

The corresponding couplet from Carmina Burana 101 is:

{ O hellcat, why go you free? Unbetrayed, you betray all the rest!
Why do you, the culprit of the fall, fall not also dead? }

Trans. Marshall (2014) p. 143. In Caxton’s couplet, the word concia is difficult. It doesn’t occur in major medieval Latin dictionaries. The word concio, apparently a variant of contio, is attested with the meaning of a gathering of monks. Concio evidently draws upon the verb form conciō. My translation of concia as “gathering” (in reference to the female Helen) is conjectural-contextual. I’m grateful to David Konstan for advice on translation. All errors in translation, and errors and outrages in this post generally, are my own responsibility.

The poor taste of these lines does not call for any comment, and, if a modern parallel is in place, the term ‘doggerel’ will best characterize Bernardus’ poetical accomplishment.

It looks as if it was a floating school-poem, anonymous but of great popularity, on which more than one poet exercised his ingenuity by way of expansion or imitation.

Sedgwich (1933) p. 82. That’s reasonably interpreted as considerable poetic success. Academics today should celebrate this poem for its trangressiveness and as an example of medieval Latin freedom of speech.