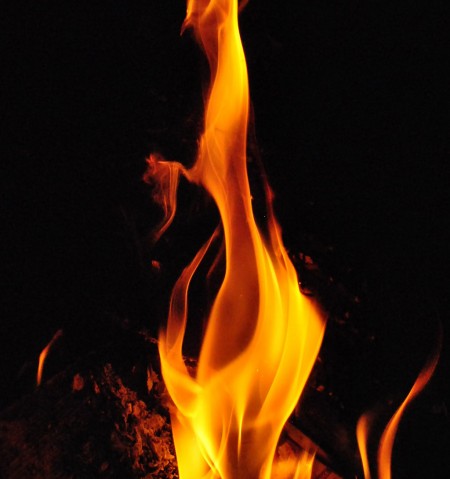 In a flame went up
the whole of the philosopher.

The love that is “eros” is a disease touching the brain. It is a great longing with intense sexual desire and affliction of thoughts. From this certain philosophers say: Eros is a word signifying the greatest pleasure. For just as loyalty is the ultimate form of affection, so also eros is a certain extreme form of pleasure. [2]

The Arundel Lyrics play across the polarities of lovesickness in a variety of ways. Love is a “wonderful plague” (mira peste). The poet declares that he is “happy in my unhappy disease” (morbo felix infelici). More subtle are material figures of the lovesick mind:

Poised on a tipsy scale
in balance,
my mind, suspended, fluctuates
and whirls about
in anxious confusion,
as it turns itself upside down
and splits into
warring emotions.

A scale, balanced but tipsy, whirls about and turns upside down. Those verbs destroy any understanding of balance. The mind, an abstract concept, undergoes the material commonplace of splitting, but its split parts consist of the abstractions of warring emotions. The figure of a scale re-emerges in peculiar reasoning:

On a scale I weigh
what is better
and still uncertain
I deliberate with myself.
Now I recall to mind
delights
of love:
that to me my darling Flora
gives kisses,
how she laughs, what tender lips,
what face,
brow, nose, and hair!

This reasoning is only imagining sensuous delights. Reason subsequently torments, pokes, and threatens, but doesn’t provide any substantive reasons. A battle between reason (Athena) and love (Venus) is a conventional figure in ancient and medieval Latin poetry.[4] In the Arundel Lyrics, those battle lines are deliberately blurred.

The Arundel Lyrics satirize a physician treating lovesickness. The poet declares that the only remedy for lovesickness that he has received is habituation: familiarity with the experience of being lovesick. In a subsequent stanza the poet describes the faulty thinking of the physician who diagnosed him:

The healer doesn’t see the torch
that secretly destroyed me;
and he contributed
no cure;
he who examined my urine
took no thought of my semen,
and a bodily fluid,
not my penis,
he pronounced the cause of my sickness.

The poet declares that fever consumes him with a fierce heat. Yet at the same time, using technical medical terms he asserts his intellectual superiority to the physician:

With what feebleness I fight,
now I have revealed well enough
with sure prognosis.
I am not ignorant
of why I suffer.
In contrast, in making a self-diagnosis,
even as an invalid
I know
more of myself than does a physician.

The successful diagnosis of lovesickness results not from narrow medical art, but from the ancient Greek ideal of knowing oneself. The poet’s prognosis is lovesickness unto death, delayed only by blind hope for a visit from his beloved.[6]

The medical knowledge that Constantine the African brought to Italy included cures for lovesickness. The Viaticum quotes the Roman physician Rufus of Ephesus’s recommended remedy of having sexual intercourse, even with a woman one doesn’t love. The Viaticum suggests other treatments to raise the spirit of a lovesick man: drinking fragrant wine, listening to music, conversing with close friends, reciting poetry, experiencing bright, fruitful gardens with clear-running water, and conversing with beautiful, wise, or virtuous companions (women or men).[7] From perhaps the last decades of the twelfth century, the earliest surviving commentary on Constantine’s Viaticum adds about lovesickness:

This disease cannot be perfectly cured without intercourse and the permission of law and faith. For then the faculties and the body return to their natural disposition. Before it is established, therefore, consider whether there may be burning of humor; if there is, purge it. Then administer lengthy sleep, humectation {moistening}, and good nourishment, and freshwater baths. Occupy the patient with various things, so that they are distracted from what they love. In this, moreover, the counsel of old women is very useful. They may relate many disparagements and the stinking dispositions of the desired thing. Also useful is consorting with and embracing girls, sleeping with them repeatedly, and switching various ones. Hunting and various types of games also help. [8]

In contrast to medical cures, the poet’s hope is faith in all-conquering love. A refrain in one of the Arundel Lyrics proclaims:

Oh! Love conquers all.
Love is a blessed affliction!
Ah! I am faint from a sweet disease,
from this I happily die!

Yet a refrain in another of the Arendel Lyrics offers a more philosophical prayer:

I seek to be thrust into the flames,
I thirst to be burned less.
May I be less inflicted with desire,
when delivered to the fiery heat of old.

The philosopher’s praise of moderation goes up in the flames of love. At least for some men, love is a consuming fire.

May God and women have compassion and mercy for men in love. If that’s not possible, may men at least know medical cures for lovesickness.

[2] Constantine the African, Viaticum peregrinantis (Provisions for the Traveler) I.20.1-7, from Latin trans. Wack (1990) p. 187, with my non-substantial changes to improve readability. The Viaticum is an adaptation of ibn al-Jazzar’s Zad al-musafir. Ibn al-Jazzar practiced medicine in the medieval capital of Tunisia, Qayrawan. On Constantine’s adaptation of al-Jazzar’s Zad al-musafir, Brachtel (2005). Constantine probably produced the Viaticum some time between 1058 and 1087. Wack (1990) p. 32.

Constantine’s description of the love that is called eros was through misunderstanding transformed into the love of heroes. That change associated lovesickness with noble men. Id. pp. 60, 182-5. Reflecting the textual confusions, Arcite in Chaucer’s The Knight’s Tale (ll. 1373-4) suffers “the lover’s malady of Hereos.” The Knight’s Tale, like Chaucer’s Troilus and Criseyde shows how lovesickess and courtly love encouraged violence against men.

[4] Its source is “the ancient motif of Hecules at the crossroads, being tempted by Virtus and Voluptas.” Dronke (1976) p. 200, citing the influence of Cicero, De officiis 1.32.118. Another medieval example is Carmina Burana 56 (Ianus annum circinat).

[image] Photo of a fire taken with a 1/4000th of a second exposure; detail. Thanks to Awesomoman and Wikimedia Commons.

Wack, Mary Frances. 1990. Lovesickness in the Middle Ages: the Viaticum and its commentaries. Philadelphia: University of Pennsylvania Press.