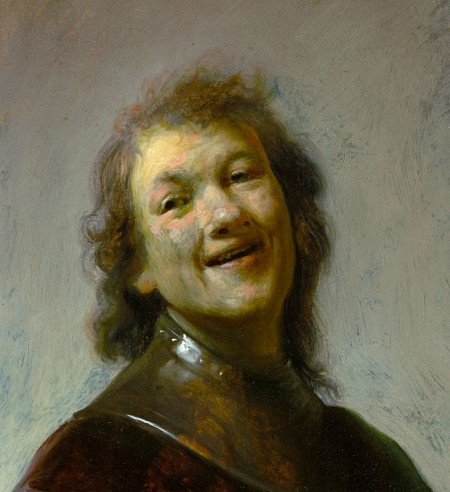 Literature from long ago can critique currently dominant ways of thinking. A lover of wisdom laughed, and another mourned:

Democritus
habitually laughed
at each and every meeting,
seeing people everywhere
swarming in error,
today he would not restrain his smile,
and Diogenes in his wine barrel
wouldn’t cease to mourn.

One nonetheless believes himself happy
who enjoys
a passion
by which he is led.
Happy indeed one is called
with regard to the soul.
The lives of humans
are revolved by conflicting pursuits.
Equal nonetheless is their end;
the same conclusion awaits them.
Each one wanders in her own way;
she is happy in her error,
as long as she has what she desires.

Various ways
in error
one is sent wandering.

How should Peter of Blois and those he advised live their lives?[2] In pondering that question, Peter of Blois brought ancient Greek figures to his twelfth-century circumstances.

Understanding of human nature contrasts with contrived, made-up stories. Both were aspects of ancient Greek culture. Peter of Blois’s enlightened use of ancient Greek stories involved actively re-interpreting them:

Mystical fictions,
which Greece
playfully contrived in made-up stories,
now that the clouds have been dispersed,
are going out into the world
and coming into the light
as ingenious explanations.

Peter of Blois re-interpreted Greek myth in terms of the lives of twelfth-century courtiers. Tantalus is the one longing for wealth amid riches. Daedalus builds a labyrinth of ambitions in which he is trapped. A courtier’s confused wishes place him, like Ixion, on the revolving wheel of fortune. Great lords drink in flattery like King Midas with an ass’s ears. Another courtier, changeable like Proteus, betrays faith with multifarious promises. Under the compulsion of Venus, some courtiers pursue young women, others old women, some married women, others virgins, and still others boys.[4]

Peter of Blois had a dialogic sensibility. In his poetic dialogue between a courtier and a pious admonisher, the courtier declares:

Only fools make themselves unhappy
of their own free will

Peter of Blois’s poem that begins with Democritus laughing and Diogenes mourning ends with complex observations on individuality and human nature:

Thus, as long as life is lived far and wide,
as long as there is seeking for
what is sweeter for each,
a changeable method brings pleasures by various
miseries
corrupted;
nonetheless, as long as his own delights
each enjoys,
pleasure
follows equally.

Subjective pleasure-seeking secures equally for each pleasure corrupted by misery, the misery of wandering various ways in error. Another of Peter of Blois’s poems associates human being with nature in atomistic understanding:

Our physical self
follows the elements,
and in the season’s warmth
it is touched to the depths.

As for free will, perhaps that’s a fiction:

the allurement of beauty
creates the causes of love.

Human nature nonetheless makes persons — collections of material elements — believe that they can choose. If you believe you can choose, choose to lead your life with understanding of human nature.

[1] Ridere solitus st. 1, from manuscript Oxford Bodley Additional A.44, f. 45r-45v, printed in Wilmart (1958) pp. 37-9.  This poem as a whole survives only in that manuscript. Moser (2004) pp. 223-4 provides the Latin text from Wilmart and adds an English translation. I’ve adapted Moser’s translation. To make the Latin text more easily readable, I’ve converted u to v where appropriate. The subsequent two quotes are from id. st. 2, and refrain. The refrain occurs after each half-strophe. That’s a “very unusual feature” in a rhymed rhythmic sequence of classical form. Dronke (1976) p. 224, note to 21.

[2] Peter of Blois corresponded with twelfth-century intellectual, religious, and political leaders. On his letters, Cotts (2009). His letter collection subsequently was relatively popular and has survived in 250 manuscripts. It’s available, along with other works of Peter of Blois (Petri Blesensis) in Patrologia Latina 207. On textual issues with respect to the letter collection, Cotts (2009), Appendix.

Ambivalence and sic et non {yes and no} characterize Peter of Blois’s letters and poetry. In Epistle 14, he states that “the courtier’s life is the death of the soul.” From Latin trans. Dronke (1976) p. 194. In Epistle 150, he declares with respect to the choice to be a courtier:

Let each person follow and keep to the decision of his own will.

[3] Ridere solitus st. 3, from Latin trans. Moser (2004) p. 225, adapted above. In Epistle 76, Peter of Blois chides a correspondent (who may have been a projection of himself) about ancient Greek culture:

What are they to you, these vanities and false insanities? … What’s Jove to you, what’s Hercules to you?

[4] In ancient Greek myth, Apollo transformed King Midas’s ears into an ass’s ears for not judging his music to be superior. On the origins of that myth, Vassileva (2008). The association of King Midas’s ears with flattery seems to have been a medieval interpretation.

from elemental ashes formed, mere matter,
as the wind lashes, like a leaf I flutter.