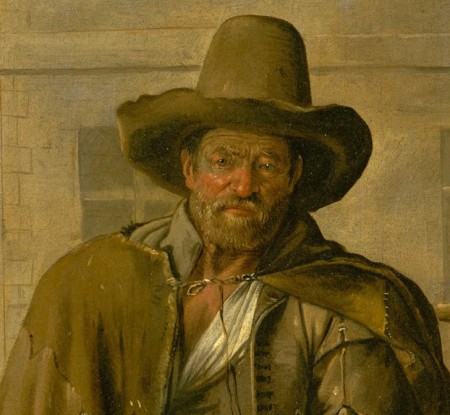 Many husbands believe whatever their wives tell them. That’s a mistake. Husbands should learn from a peasant living in Bailleul in thirteenth-century France. His wife told him he was dead. He believed her. As a result, he was cuckolded before his very own, living, seeing eyes.

While the husband was out working in the fields, his stay-at-home wife planned an amorous engagement with a local pastor. She cooked a chicken, baked a cake, and readied some wine for romancing. Unfortunately, her peasant husband returned home early, tired and hungry. His wife’s joyful meal seemed to be spoiled.

Women, however, are far superior to men in guile. Acting out her wish that her husband were dead, to him she said:

Milord, God bless my soul,
How weak and pale you seem to me!
I swear you’re only skin and bone.

Her husband, without understanding, said that he was starving. She responded:

I know for sure you’ll soon be dead;
a truer word you’ll never hear.
Now go to bed; you’re dying, dear.
Oh, woe is me! When you are gone,
I’ll lack the will to carry on,
because you’ll be away so far.
Oh sire, how very pale you are!

She prepared for him a bed of straw and hay in a corner of their one-room home. Then she undressed him, had him lay down with his mouth and eyes closed, and covered him with a sheet. She then lay on top of him and lamented that he was dead:

May God have mercy on your soul!
Oh, how can a wretched wife console
herself, and keep from dying too?

The peasant believed his wife. He believed that he was dead.

His wife then fetched her lover-priest. He came and read some psalms. She beat her palms against her breast, but didn’t manage to weep. The priest then undressed her and laid her down on some straw:

the two of them were soon enmeshed,
with him above and her below.
The peasant saw the whole tableau
while lying underneath the covers;
open eyed he watched the lovers,
clearly saw the straw-sack jumping,
saw as well the chaplain humping,
knew it was the chaplain too,
and raised an awful hullaballoo.

The peasant shouted that if he weren’t dead, he would pummel the priest to hell. The priest sternly instructed the peasant that since he was dead, he should keep his eyes closed. Understanding, but not, the peasant then tried to act dead. Meanwhile, his wife and the priest continued with the activity that creates new life.

Like the peasant from Bailleul, men in general are too willing to accept being consigned to death. In the Middle Ages, stories helped to enlighten men about real life. Those stories are too important to be suppressed today.

[image] Peasant with questioning look. Detail from the painting The Baker’s Cart. Jean Michelin, 1656. Held in Metropolitan Museum of Art (New York), accession no. 27.59. Thanks to the Met and Wikimedia Commons.