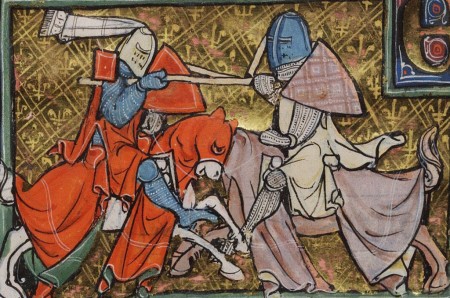 A certain British knight was roaming alone through the royal forest hoping to see Arthur. When he had been drawn to the interior of the forest, a girl endowed with wondrous beauty, seated on a caparisoned horse and binding up her hair, suddenly met him.

The beautiful girl who no longer felt passionate sexual desire administered manlet tests to the British knight. She explained to the knight:

When you were seeking the love of a certain British lady, she told you that you could never win it unless you first brought her the victorious sparrowhawk which is said to sit on a golden perch in Arthur’s court.

The knight confirmed her assertion. When his beloved lady said she wanted the victorious sparrowhawk sitting on a golden perch in Arthur’s court, the knight went in search of Arthur and his court. He should have offered her the medieval version of skittles.

The beautiful girl then piled on the manlet tests. She declared:

You could not take the sparrowhawk you seek without first proving by combat in Arthur’s palace that you rejoice in the love of a lady more beautiful than any possessed by those who dwell at Arthur’s court. Moreover, you could not enter the palace without first showing to the guards the gauntlet for the sparrowhawk. That guantlet you cannot get without winning it by engaging two of the bravest knights in a double contest.

Those are tasks of violence. Such tasks explain why medieval men had much shorter life expectancy than did medieval women. The gendered pattern of violence continues to be ignorantly misunderstood: violence kills more than four times more men than women. Keep repeating that fact until the violence stops, or at least until the vagina monologues stop.

As a benighted knight, the man put himself under the direction of the girl. The knight declared to the girl:

I realize that I cannot succeed in this hard task if you do not offer me the help of your hand.

Only obtuse readers don’t perceive witty mocking in the knight seeking the help of the girl’s hand in succeeding in tasks of violence. The knight earnestly expressed his desire for the girl’s direction:

I wish to subject myself to your direction, and ask you humbly to give me your help in this task. Grant me your consent, that under your directing eye, I may boldly claim for myself the love of a lady more beautiful than all others.

Most men are easily made subordinate to a beautiful girl. Men, of course, naturally seek sex with beautiful young women. But the behavior of a manlet drys up a girl’s sexual desire. The beautiful girl gave the knight the kiss of love. That, like the kiss of peace, was meant to be purely without lust. She then gave him her horse to lead him. Only a man who’s a poor rider would literally ride such a horse, instead of the girl herself.

The knight then rode off and accomplished his woman-directed manlet tasks of violence against men and acquisition. Just as in the story of the manlet Lancelot, a bridge-keeper sought to keep the knight from crossing a bridge. They then fought. The knight seriously injured the bridge-keeper, suffered a serious bodily wound himself, but managed to cross the bridge. On the other side of the bridge, the knight killed a man who had attempted to drown him. Seeking food, the knight fought a palace guard, of course also a man. The knight suffered huge blows while the guard lost his hand. To get the sparrowhawk, the knight engaged in a brutal fight with another man. As a result of all this violence against men, the knight secured the sparrowhawk that his beloved lady desired. With the sparrowhawk came a scroll containing rules of love. Men fighting men is inevitably a losing activity for men.

The knight missed an opportunity for love with a beautiful girl because he failed to understand the game. When the beautiful girl gave the knight his manlet tests, she said:

If your heart proves so bold that you don’t fear to seek out the things I mentioned, you could obtain from me what you propose.

The knight returned to the girl to show that he had done what she required. She responded joyfully. She flirtingly said to him:

You have my permission to depart, dearest one, because sweet Britain demands you. But I beg you not to accept your departure reluctantly, because whenever you wish to approach this region alone, you will always find me here.

Societies have long demanded men’s bodies. Men, in contrast, have been reluctant to demand their entitlement to love. The beautiful girl said that she would be there for the knight. She right then was there for the knight. He happily left to fulfill the demands of sweet Britain and help to instruct all men in the rules of love. Benighted, sexually deprived men have been following oppressive, brutalizing rules of love ever since.

I’ve made some minor changes to Walsh’s translation, mainly to track the Latin more closely. For in capillorum ligatura inopinate sibi occurrit, Walsh has “binding her hair, suddenly confronted him.” Recognizing the context of this gesture and the non-confrontational context, I translated the Latin as “binding up her hair, suddenly met him.” The sparrowhawk (accipiter) Walsh translates as “hawk.”

In her reading of the Sparrowhawk episode, Echard perceives two competing systems of conduct: courtly behavior and fairy romance. Echard also recognizes the importance of Book 3 of De amore for interpreting the Sparrowhawk episode, which comprises most of the last chapter of Book 2. Echard (1998), pp. 112-21. Book 3 of De amore develops men’s sexed protest dialogically. The purgatory of cruel beauties in De amore similarly exists in relation to an alternate presentation of natural dread game. Andreas commonly developed themes with thematic contrasts.

[image] Knights (men) engaged in violence against each other. Illumination on folio 339r, Yale Beinecke MS.229 Arthurian Romances. Made in France, 1275-1300. Thanks to Manuscript Miniatures.