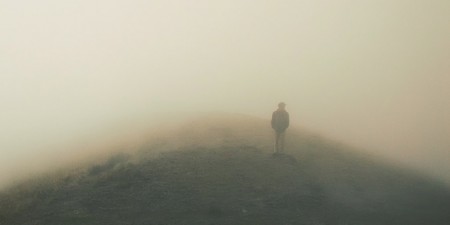 Yvain became insane with grief when his wife rejected him. He fell to sleeping naked in the woods. One day, a girl passing by in the woods saw him. She didn’t merely gaze at him (that’s a violent, dominating act according to some literary scholars). She stared at him. Moreover, she didn’t just sexually assault him. She responded to the naked, sleeping Yvain with a complex, ambiguous mix of emotions and motives represented in subtle, highly literary poetry.

In a traveling party of two girls and their lady, only one girl saw Yvain sleeping naked in the woods. She didn’t immediately turn away or notify her companions. His body powerfully attracted her:

As soon as she saw the naked
Man, {she} dismounted and ran
and stared at him hard, trying
To find something about him
From which she might know his name.

Looking at a person’s face is typical means of recognition. Her focus was to “find something about him”:

And she stared and stared until,
At last, she became aware
Of a scar on his face, just such
A scar as she’d seen on the face
Of my lord Yvain, and she knew it,
For she’d seen it often. And the scar
Made it all clear: it was him,
She had no doubt.

Staring at a naked, sleeping man isn’t necessary to discern a distinguishing scar on his face. Her consciousness apparently was elsewhere, and then shifted. Yvain was a knight, “the most famous knight in the world, and the best,” powerfully skilled with his lance. Something was mind-absorbingly amiss about Yvain’s body:

A wondrous thing to behold
What he’d come to, to find him in the woods,
Naked and poor. She watched him,
Amazed, crossing herself,
But neither touched nor awoke him

The girl returned to her companions and told them that the naked sleeping man was the famous knight Yvain.

The lady needed Yvain to fight for her. She was at war with a count. The count had launched a bitter attack on her realm. Yvain could turn the war in her favor. She needed his body to be strong, firm, and active. She needed his mind fully awake in service to her.

Without Yvain’s affirmative consent, the girl took peculiar action to revive him. The lady gave the girl magic ointment to cure fever of the brain. The lady give the girl specific, emphatic instructions:

{she} gave it {the magic ointment} to the girl, warning her
Not to use it too freely.
His temples and his forehead should be rubbed:
There was no need to use it elsewhere.
Only his temples required
The ointment; the rest should be kept.
There was nothing wrong with any
Part of him except his brain.

The girl seems to have perceived something wrong with his body below the brain. Disregarding the lady’s instructions, the girl, “meaning to touch and handle him,” rubbed ointment on all parts of the sleeping Yvain’s naked body. She took:

The ointment and rubbed him with it
Until none was left in the box,
So anxious to cure him that she rubbed him
Everywhere, till she used it all,
Paying no attention to her lady’s
Warning — indeed, completely
Forgetting it. She rubbed in more
Than could ever be needed, but hardly
Enough, in her opinion.
She rubbed from his temples and his forehead
Right down to his toes. She rubbed
His temples and all his body
So well, in that bright warm sun,
That all his frenzy and his sadness
Slipped right out of his brain.

His mind and his memory recovered,
And seeing himself naked
As ivory, he was terribly ashamed,
But it would have been worse had he known
Everything he’d done. But all
He knew was his nakedness.

Suppose he had known everything she had done. Would he have been even more ashamed? Angry? Would he have sought to have her expelled from campus and locked up in prison for a long sentence? Even if she had acted from her own carnal desire, he might have been grateful for her treatment of his mind and body. That, however, isn’t permissible to imagine today.

All the quotes above are from Chrétien de Troyes, Yvain: The Knight with the Lion, ll. 2888-3130, from Old French trans. Raffel (1987) pp. 88-95. The magic ointment was from Morgan le Fay. She harshly exploited and abused the magician Merlin. Nothing in the above post should be interpreted as condoning women raping men.