An ancient Hebrew prophet recorded a proverb with a now-famous sentiment, “Let us eat and drink, for tomorrow we die {אָכֹל בָּשָׂר וְשָׁתוֹת יָיִן אָכוֹל וְשָׁתוֹ כִּי מָחָר נָמֽוּת}.”[1] Reminding women of the effects of old age is a venerable tactic for men seeking to overcome their sexually disadvantaged position:

You who hide your years — may the weight of old age oppess you
and hostile wrinkles come upon your beauty!
May you then wish to pull out your white hairs by their roots
now that your mirror is chiding you with your wrinkles!

The ancient Greek physician Hippocrates declared in an aphorism, “Life is short.” Was Hippocrates a physician with expertise in helping men to gain access to women and sexual healing? This issue was subject to dueling tales across Latin and vernacular literature in medieval Europe. Judging from prevalence of manuscripts, medieval Latin literature triumphed over a man-disparaging vernacular tale of a beautiful woman shaming the sexually desperate Hippocrates.

Valerius tells in book four, chapter three, under the heading abstinence and continence, that Hippocrates exemplified marvelous continence. For in Athens, there was a prostitute with a noble and beautiful face, to whom young and maturing men guilefully pledged a sum of money if she could bend Hippocrates’s spirit to incontinence. She came to him and lay down next to him, but she could not in any way shake his continence. The young men then mocked her, because she couldn’t bend his spirit with her allure, and were ready to declare victory.  She responded: the pledge was to lay down not with a statue, but with a man.  For his steadfast continence, the philosopher was henceforth called a statue.

Valerius Maximus, book four, chapter three, contains nothing about Hippocrates. It does contain, however, a similar story concerning Xenocrates and Phryne.[4] Immediately after telling the story of Hippocrates, Cessolis sketched a similar story concerning Xenocrates and an unnamed woman. Cessolis clearly knew Valerius’s text. The story of Hippocrates resisting the beautiful woman’s sexual overtures most likely existed in a faulty version of Valerius’s book that Cessolis used.[5] 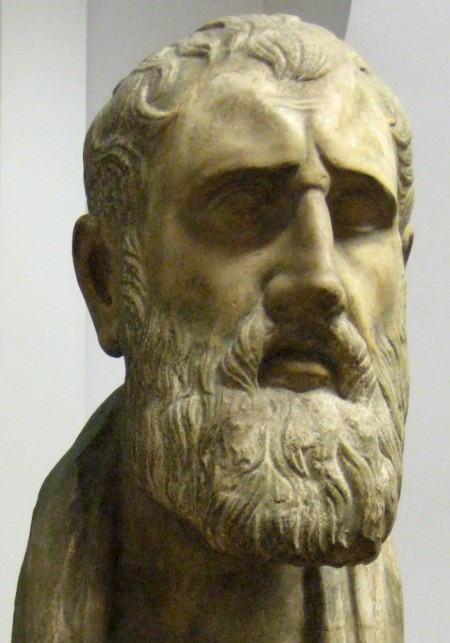 Medieval Latin literature historically provided a crucial counterbalance to gynocentrism. The witty story of Hippocrates exercising the self-control of a statue circulated widely in Europe through Jacobus de Cessolis’s highly popular book.[7] Manuscripts of the Old French History of the Holy Grail are relatively rare. Vernacular literature has long supported gynocentrism. Today, dominant gynocentric interests have largely deprived students of the ability and opportunity to read transgressive medieval Latin literature. That has to change if humane civilization is to endure.

[1] Isaiah 22:13. For a similar expression, Ecclesiastes 8:15. Galen and Paul of Tarsus castigated the Epicureans for promoting that sentiment.

[2] Propertius, Elegies, III.25, Latin text from the Latin Library, my English translation, benefiting from those of Slavitt (2002) pp. 195-6 and A. S. Kline. Here is Slavitt’s looser, more poetic translation:

And good-bye, to you, too, lady. Your future awaits,
the oppression of age, wrinkles, spider-veins, and saggings

For related discussion and references, see my post on men’s views of love and aging in Roman and early Arabic literature.

[3] Jacobus de Cessolis, Libellus de moribus hominum et officiis nobilium ac popularium super ludo scacchorum (Small book of the customs of men and the duties of nobles and commoners {understood} above the game of chess) Bk. 3, Ch. 5 (De medicis et pigmentariis (Of physicians and cosmeticians)), Latin text of Bert (1957) pp. 109-10, my translation from the Latin, with help from Williams (2008) p. 82.

Both William’s and Caxton’s translations don’t include the specific reference to Valerius: libro quarto, capitulo tertio, sub rubrica de abstinentia et continentia. In the initial description of the woman, Williams has “an aristocratic and rather attractive prostitute.” Caxton’s translation elides the woman’s nobility: she was “a right fayr woman, whiche was comyn.”

Jacobus de Cessolis was a Domincan friar, probably from Lombardy in northern Italy. He apparently wrote his book on chess in Genoa. Murray (1913) pp. 537-40; Adams (2009) Introduction.

Caxton’s translation apparently was based on a French source. Regenstein Library MS 392 (at the University of Chicago) corresponds closely to Caxton’s text. Caxton also seems to have studied Latin texts of the work, in particular Bibliothèque nationale de France, MSS fr. 2146 and 2471. Adams (2009) Introduction, esp. n. 37, 38.

Williams translated the German text of Schmidt (1961). Schmidt’s text provides a critical edition of German prose translations from Latin that originated early in the fourteenth century. Despite medieval popularity of Cessolis’s work, no English translation based primarily on the medieval Latin manuscripts is currently available.

[4] Here’s the version from Valerius:

Phryne, a celebrated courtesan in Athens, lay at an all-night revel by his side when he was heavy with wine, having made a wager with some young men that she would be able to seduce his temperance. He did not rebuff her either with touch or words, but let her stay in his arms as long as she wished and then let her go foiled of her purpose. An abstemious act of a mind steeped in wisdom, but the little whore’s comment too was really amusing. For when the young men jeered at her because for all her beauty and chic she had not been able to cajole a drunken old man with her enticements and demanded the agreed price of their victory, she answered that she had made the bet with them about a man, not a statue.

Valerius Maximus, Facta et dicta memorabilia (Memorable Doings and Sayings), Bk. 4, Ch. 3 (De abstinentia et continentia (Of abstinence and continence)), Latin text and English translation from Shackelton Bailey (2000) vol. 1, pp. 382-3. The story of Hippocrates in Cessolis clearly is adapted from Valerius’s story of Phryne and Xenocrates. The route of transmission could be indirect. For example, the same story occurs in Diogenes Laertius, Lives of the Eminent Philosphers, Book IV, Xenocrates.

Cessolis’s work collects existing stories. It doesn’t create new stories. Moreover, if the story weren’t in Cessolis’s edition of Valerius, Cessolis probably wouldn’t have provided a false attribution to the part of Valerius that includes an obvious source for the story.

Valerius’s text survives in more than eighty manuscripts, the earliest dating to the ninth century. Bk. 4, Ch. 3, includes amazing stories of continence. Consider, for example, the wife of Drusus Germanicus. After he died, she didn’t remarry:

in the flower of her age and beauty, she slept with her mother-in-law in lieu of a husband.

[6] Another of my posts provides more on the story of Hippocrates in the Lancelot-Grail and relevant references.

{Cessolis’s book on chess} was one of the most popular literary works of medieval times. There are some 200 or more manuscripts and early editions extant today.

More than 80 medieval Latin manuscripts of the text have survived. Murray declared:

There is a very large number of MSS. of this work in existence of the 14th and 15th cc., both in the original Latin and in translation into the spoken languages of the time: indeed it is probable that no other work of mediaeval times was so much copied. Its popularity exceeded that of the Gesta Romanorum, and, if we may judge from the number of the existing MSS., must have almost rivalled that of the Bible itself.

[8] Catullus, Poem 42 ll. 10-20, from Latin trans. William Harris, which includes interesting commentary. For the Latin texts of all of Catullus’s poems, as well as translations into many languages, see Rudy Negeborn’s wonderful Catullus site. While still making a fine English translation, Negeborn’s Catullus 42 in English uses more casual forms than the above translation.

[image] Zeno of Citium, founder of Stoic school of Greek philosophy. Thanks to shakko and Wikimedia Commons.

6 thoughts on “Hippocrates triumphed exercising self-control like a statue”