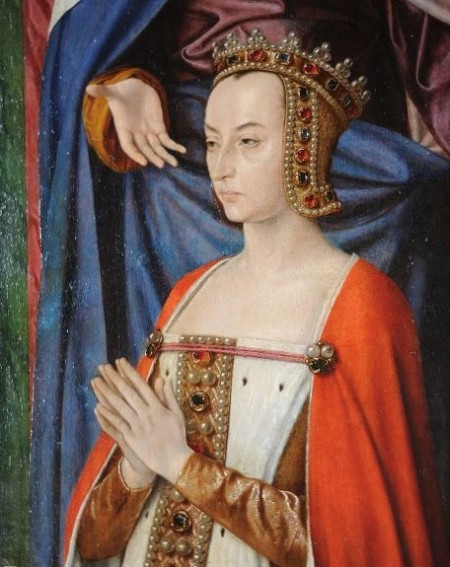 Anne of France, who came to be known as “Madame La Grande,” was the oldest and favorite daughter of King Louis XI. Just before his death, he appointed her and her husband regent of the succeeding King Charles VIII, her younger brother. Anne dominated both her husband and her younger brother. As regent for King Charles, she was effectively ruler of France from 1483 to 1491. When King Charles begin ruling France himself, Anne then shifted to ruling her husband’s Duchy of Bourbon. She was a very powerful and highly privileged woman.[1]

Anne of France provided lessons not just for her daughter, but for all women. She taught the values and morals of a strong, independent woman with enormous political ambition:

Conscious always of her royal heritage, having served as virtual king of France for eight years, and in a moment when she faced her own mortality, Anne of France looked to her royal forebears when she decided to set down her own life-lessons for her daughter. Although clearly informed by her reading of books like those of Christine de Pizan — who was, like Anne herself, a woman writing to women — Anne aimed for something more than a simple guide to good behavior when she distilled her experience into the lessons she intended for her daughter. … Just as her father had defined the ideal king, Anne used her lessons to construct an ideal princess. … Anne presents a guidebook on governance for Suzanne {her daughter}, one not altogether unlike Machiavelli’s more famous book of advice for a would-be prince, written some fifteen years later. [2]

Intellectual historians, who have been predominately men, haven’t appreciated the importance of Anne of France. She trumped Machiavelli with thinking that few today realize continues to manipulate them.

Anne of France’s lessons for her daughter provide an extraordinary window into the unknown history of medieval anti-meninism. From the commanding heights of French royalty, Anne of France taught blunt lessons of anti-meninism:

there is no man of worth, however noble he may be, who does not use treachery, nor to whom it does not seem good sport to deceive or trick women of rank from one good family or another, it doesn’t matter which. And Doctor Lienard says there is no man so perfect who, in matters of love, is truthful or keeps his word, however firm or fervent — which I certainly believe. One time I heard a noble woman of great rank tell about a knight she knew who, in such a situation, took a solemn oath of his own free will, on his honor as a gentleman, on the altar and on a missal where Mass is said everyday — and this knight did not keep his oath for more than four hours! And, as she told me, the oath was very reasonable and, with all respect to his honor and conscience, he had no excuse whatsoever for breaking it except his own lust, weak will, and sudden change of heart. Therefore, my daughter, whatever flattering speeches or great signs of love that someone may make you, trust none of them. [3]

Not all men are like that. Some men aspire to be as dynamic and responsive to circumstances as women are.[4] All men shouldn’t be distrusted. History and the gender composition of prisoners show how readily society criminalizes men for seeking love. Latin literature documents at least one women with sympathy for outrageous persecution of men. Yet the massive historical stream of anti-meninist literature, which is deeply connected to the very act of writing in forcing pen to matter-mother, has shaped society from today’s affirmative-consent college sex codes to men not having any reproductive rights whatsoever.[5]

Until recently, men have written the bulk of anti-meninist literature, while women have written relatively little. The relative paucity of women’s writing indicates women’s shrewdness. After all, others will viciously attack you for whatever you write in accordance with the enormity of their misunderstandings. Anne of France, however, wrote fearlessly and openly. For example, in words preserved in writing to our day, Anne of France instructed her daughter:

never behave as those arrogant mothers who display themselves with their daughters, next to whom they look like grandmothers! Such women are mocked. … I do not mean to say that a noblewoman, whatever her age or rank, should not, within reason, show herself to best advantage over others, but whatever beauty a woman has had, once she has passed the age of forty, there is no clothing, however beautiful, that can make the wrinkles on her face disappear.

Few today would dare utter such words, to say nothing of putting such words into writing.

Anne of France was deadly serious about imbuing her daughter with anti-meninism. Anne instructed her daughter:

suffer no man to touch your body, no matter who he is, no holding of hands or pressing of feet. In conclusion, my daughter, remember those three aforementioned daughters who were the cause of their mother’s deaths, and do not behave so that your bad conduct is the cause of mine. [6]

That’s every daughter’s deepest fear: her bad behavior will cause her mother’s death. Anti-meninism fundamentally rests on belief that men are so evil that they shouldn’t be allowed to touch women. If a woman allows a man to touch her, she will cause her mother’s death. That potent psychological manipulation perpetuates anti-meninism from one generation of women to the next.[7] 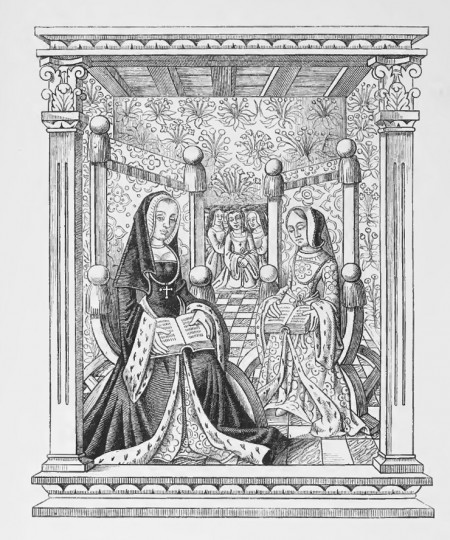 A medieval scholar, like Anne herself, a woman writing to women, recently recognized Anne of France’s enormous importance for women. Anne of France’s lessons for her daughter are teachings of pure woman:

The world of the Lessons is curiously but significantly free of male control. For all the attention paid to Suzanne’s life as a daughter {of Anne}, paternal authority is absent. While a wife must be obedient {at least according to formal regulations}, the husband she must obey is an elusive presence, prone to folly, mistakes, and of course, absence, either because of war or death. As a mother, Suzanne must pay particular attention to the rearing of daughters; sons are never mentioned. [8]

Anne of France’s thinking seems to project an ideal anti-meninist world in which all males are eliminated. Women seeking to understand the effects of anti-meninism on their lives need to think through the history of women:

Only foolish women think nothing of their foremothers — of their mothers and grandmothers, or their aunts and sisters.

Anne of France was a leading foremother of medieval anti-meninism:

she shaped the lives of many influential women. At the moment of her death, two of them had taken their own places on the stage of early modern power and politics: Margaret of Austria, whom Anne raised and educated for ten years, was regent of the Netherlands for her nephew, the Habsburg emperor Charles V, while Louise of Savoy, who had been sent by her father to Anne of France when the girl was seven, had already served as regent of France for her son, Francis I, and would be called upon a second time to fulfill that role. They were only two of the generation of women she had influenced; in Brantôme’s words, “there were no ladies or daughters of great houses in her time who did not receive lessons from her.” Having shaped the next generation and distilled her principles into her Lessons, Anne of France had become a “mother” for women to “think back through.”

{she} could be both haughty and grasping in her public life. Cupidity was a characteristic she shared with many, but even in that age of ostentatious spending, when spenders needed to be getters, Madame’s lust for gold was remarked on.

Id. p. 107. Anne of France liked marble fountains. She acquired an Italian one that had been located in the city of Lyon. She also kept a menagerie of exotic animals. She pressured Lorenzo de Medici to give her his prized giraffe. Id.

In discussing seduction, Anne of France declared, “the sin of the man who pursued her is even worse.” Id. p. 62. For adultery and for seduction, as for most crimes, gynocentric society is biased toward blaming men and exonerating women.

[5] On theorizing writing, see note [8] in my post on Bernard of Cluny.

The Enseignements {Anne of France’s lessons for her daughter} are singularly lacking in love, almost shocking so when one considers that they were compiled by a mother for her only child, a girl of twelve or perhaps thirteen.

Id. p. 194. Anti-meninism tends to be associated not just with contempt for men, but also lack of true love for women and children.

[7] Anne of France was highly skilled in manipulating persons:

She learned to mask her natural arrogance and her impatience to get things done. … No one could play a waiting game better than she. She worked at one remove, through men who were often unaware that they were being manipulated. Again and again during her years in power she promised the earth only to renege when she had gained her ends.

Matarasso (2001) p. 20. Historians haven’t recognized the extent to which Anne of France manipulated women, including her own daughter.

[8] Jansen (2004) p. 89. The subsequent two quotes are from id. pp. 89-90. Matarasso excuses Anne of France and blames men for Anne of France’s anti-meninism and for her other lessons for her daughter:

Growing up at court in the late fifteenth century was a confusing business for a girl. The position of the noblewoman in the Middle Ages was deeply ambiguous.

Matarasso (2001) p. 37. Anne of France was a poor, over-privileged dear. Relative to her, peasant men had the advantage of clearly knowing the position of their harsh, brutal, and relatively short lives. Of course, books that Anne of France and other noblewomen had the learning and leisure to read also oppressed them:

the books that were their mainstay gave them deeply confusing and in the main negative views of themselves, of marriage and of their role in society. To become, as Anne did, one’s own woman in spite of it, must be hailed as a triumph of nature over nurture. … {Anne of France} passed on to her own daughter in her “Precepts” the low opinion of women which she herself had absorbed from men and books (it must be said that she had a low opinion of human nature generally).

Id. The manipulative claim, “you’ll be the death of me, your mother” almost surely wasn’t a tactic that Anne of France learned from men. More generally, if men are to be blamed for medieval anti-meninism, women should be credited for medieval literature of men’s sexed protests.

[images] (1) Anne of France. Detail from the Moulins Triptych. Made 1489-99 by Master of Moulins (Jean Hey). Thanks to the Yorck Project and Wikimedia Commons. (2) Anne of France giving lessons to her daughter Suzanne. Prefatory etching in Chazaud (1878).

Matarasso, Pauline Maud. 2001. Queen’s mate: three women of power in France on the eve of the Renaissance. Aldershot: Ashgate.