Written about 200 GC, Athenaeus’s sprawling work Deipnosophists (The Learned Banqueters) has been in modern scholarship mainly a source for literary grazing. The literary design of Deipnosophists, however, is beginning to be recognized. Athenaeus created a subtle, complex matrix for intratextual, intertexual, and creative intertexual readings.[1] The brilliance of Athenaeus’s work is exemplified in its deft relations with the story of Eve and Adam. 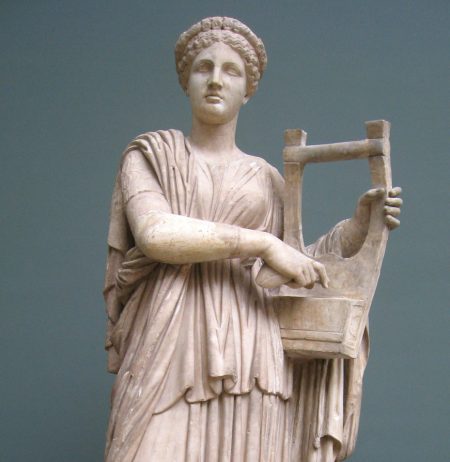 Athenaeus begins “my account of our discussion of matters relating to love” with a wry reference to offering his report to experts. Athenaeus notes that “our noble host” Larensius, a learned man with a large library, has been praising married women.[2] Popular literature has always tended toward praiseful gynocentrism. Athenaeus invokes the muse Erato. She is the muse of lyrical poetry. She is associated with carnal desire. There is nothing bitter about her. Athenaeus prays that she will tell him about love. That’s a literary move like Jerome’s creation of Theophrastus’s Golden Book on Marriage.

After Larensius favorably compares “our married women” to cosmetic-caked women and rapacious courtesans, a dinner guest speaks more bluntly about the position of married men. The very term “married women” is misleading. The guest quotes verses from Alexis’s Seers:

Miserable us! … We’ve sold
our right to speak freely in our day-to-day life and to have a good time,
and we live as women’s slaves instead of free men!
So do we claim we’ve been awarded a dowry, and not a penalty?
Yes — a bitter one full of female gall! [3]

It’s no wonder there are temples of the Courtesan everywhere,
but not a single one dedicated to the Married Woman anyplace in Greece.

The temple of Aphrodite Courtesan was probably that of Aphrodite Pandemos (Aphrodite the Public Whore). She was celebrated along with Solon’s fine wisdom.

The Hebrew Book of Genesis tells of the fall of the first man Adam after the serpent tricked Eve. According Eubulus in Chrysilla as quoted by a deipnosophist, Adam shouldn’t be blamed:

I hope
the bastard who was the second man to get married gets
what he deserves! Because I won’t say anything bad about the first guy —
since he lacked experience of the trouble he was getting into, I think,
whereas the second one had heard what sort of problem a wife was. [4]

As is common among men considering sexed protest, Eubulus was reluctant to  criticize women:

Oh much-honoured Zeus! Then am I ever going to say
anything nasty about women? By Zeus, I hope I die if I do;
they’re the best possession there is! If Medea
was a bad woman, Penelope was
something great. Someone’ll say Clytemenstra was bad;
I counter her with the excellent Alcestis. Maybe someone’ll
speak badly of Phaedra; but, by Zeus,
there’s the marvelous … Who was there? Who? Oh, miserable me —
I ran out of good women right away,
and I still have lots of lousy ones to mention!

But for less foolish men coming after Adam, the deipnosophist immediately offers Genesis learning again, this time quoted from Aristophon in Callonides:

I hope the bastard who was the second person to marry gets
what he deserves! The first guy wasn’t doing anything wrong,
since he didn’t know what kind of problem a wife was
when he got married. But the next one to do it
knew, and threw himself in obvious danger.

Do you get it now? Are you incapable of learning from literature? Or is it that you have contempt for Jewish belief, just as Galen rejected Moses’s knowledge of God? Ok, you know Menander. He is the most revered ancient Athenian comic playwright. Learn then from Menander’s The Girl Who Was Set on Fire:

Damn to hell whoever
the first guy was who got married — and then the second one,
and the third, and the fourth one, and whoever came after him!

Whether following Jewish scripture’s account of Eve and Adam, or the traditional Greek authority of Menander, these literary quotes concern woman, man, and marriage at their origins. The tragic author Carcinus in Semele tragically wrote:

O Zeus, why do I need to say that women are trouble?
It would be enough, if you simply said “a woman.”

Those who understand the origins of woman, man, and marriage don’t take multiple wives.

Modern readers have largely failed to read Athenaeus’s Deipnosophists as imaginative literature. Part of the problem seems to be that readers tend to approach Athenaeus from the literary perspective of earlier Greek and Roman literature. Athenaeus is best appreciated with study of medieval Latin literature.

[1] Paulas (2012). That is a leading scholarly work on reading Deipnosophists as literature.

[3] Athenaeus’s citations should be interpreted as part of his literary significations. The word seers is revealing in context.

[4] Chrysilla was a well-known name for a courtesan.

One thought on “Athenaeus Deipnosophists intertextual with Eve & Adam”