The ancient Athenian legislator Solon (no relation to Solomon) is famous for his wisdom. Solon broadened political representation in Athens, provided debt relief for the enslaved poor, and limited the political power of women’s wailing.[1] Those are important democratic initiatives, particularly the third. But none of those initiatives are as important as addressing sexual inequality and promoting men’s sexual welfare. The crown jewel in Solon’s reputation for wisdom is his credit for founding public brothels serving all men at a fixed, affordable price. 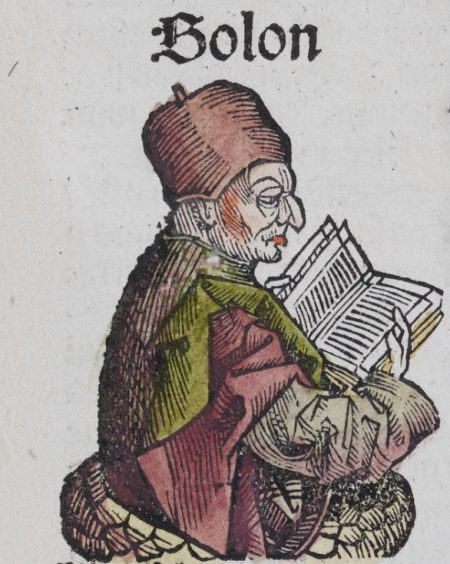 Free sexual market competition produces enormous sexual welfare inequalities. An experiment on an online dating site showed that women received roughly a hundred times more messages than men did. Across five women and five men with profiles active for four months, the least attractive woman received about the same or more messages than all but one man. The two most attractive women each were sent roughly fifty times more messages than the most attractive man received.[2] Three men received in total only three messages from women across four months. In short, the free sexual market generates large sexual inequality, greatly disadvantages men relative to women, and leaves a large share of men sexually impoverished.

You invented something for the use of all men, Solon. Because they say you were the first person to see this — a thing democratic and salutary, Zeus is my witness. Yes, it is fitting that I should say this, Solon. Seeing our city full of young men, seeing too that they had urges that couldn’t be controlled and that they went their erring way in a direction that they should not, you purchased and stationed women in various quarters, and got them ready and gave everyone access to them.

Some men foolishly impoverished themselves by giving private-enterprising women expensive gifts in the vain hope that the women would then have sex with them. One man in ancient Athens complained about Phryne:

But unlucky me — I
I fell in love with Phryne when she living thriftily,
and didn’t own as much property as she does now,
and even though I spent enormous amounts,
whenever I visited, her door was locked.

Acting to mitigate such hardships, Solon established affordable, tariffed rates for the public prostitutes: one obol per session. The public sex workers worked with the efficiency and dedication that characterizes many public servants:

There’s no
prudishness or nonsense, nor does she snatch herself away,
but straight to it, as you wish and in whatever way you wish.

Public provision of goods and services tends to be associated with lack of options and inconvenience. That, however, wasn’t the case for prostitutes in ancient Athens:

A man can pick whichever one he likes —
thin, fat, round, tall, withered up,
young, old, middle-aged, ancient —
without setting up a ladder and entering the house secretly,
or getting in through a peep-hole beneath the roof,
or being carried in sneakily in a heap of bran.

Public sex services in Athens were more convenient than private alternatives. Honoring and celebrating the great benefits of the public prostitution service to Athens, Solon established a temple of Aphrodite Pandemos – the goddess of love belonging to all the people.[7]

When from a brothel a man he knew was coming forth, “A blessing
be with your manliness,” said Cato in his revered utterance,
“for when loathsome lust has similarly swelled the veins,
it’s right that young men come down here, rather than
grind through other men’s wives.

Free sexual market competition generates large sexual welfare inequalities. Almost all men are sexually disadvantaged relative to women. Today’s democracies should recognize the wisdom of the ancient Athenian legislator Solon by establishing public prostitution services. Sex is too important to be left to free market competition. Public provision of prostitution can ensure that sex is available to all equitably and affordably. In a truly just and democratic society, such policy would be a worthy complement to compensating men for their erection labor.[9]

[2] The figures above refer to results after four months of activity. In computing the sex ratios, one must recognized that the top two women’s figures are greatly under-reported:

The two most attractive women probably would have received several thousand more if their inboxes hadn’t have reached maximum capacity.

See Jon Millward’s post. That suggests that the top two women were sent about four thousand messages in four months. The top man in the period received only 38 messages.

And isn’t Phryne behaving just like Charybdis,
by grabbing the ship-owner and gulping him down, boat and all?

she had sex with a water-clock (klepsudra) running, and stopped once it was empty

[7] Athenaeus 13.569d states that Nicander of Colophon in History of Colophon, Book 3, provides the information about Solon’s founding of the temple of Aphrodite Pandemos.

[8] Horace, Satires 1.2.31-6, Latin text from Fairclough (1926), my English translation. Augustine of Hippo valued men’s sexuality against the Galli servants of Cybele, “the Great Mother {Magna Mater}.” He also recognized the merits of Solon’s proposal in the context of Roman values:

Let there be an abundance of public prostitutes, whether for anyone who would have the pleasure, or chiefly for those who are not able to have one and are deprived.

[9] Lacking appreciation for law and comedy, a learned scholar declared in a scholarly article:

May we finally declare Solon innocent of founding public brothels in Athens? This charge was stated as fact by a distinguished historian a quarter-century ago. The hoary old canard has just been repeated in a Greek history textbook written by the same author and three additional well-known scholars and therefore has the potential to mislead a whole generation of young students who consider Oxford University Press publications authoritative. In fact, almost the only reference to Solon and public brothels in all extant ancient literature is a passage in Philemon’s Adelphoi. Philemon was a famous playwright of New Comedy. … He might indeed have died from laughing too hard had he known serious scholars were going to base a Solonian law on his play.

As improbable as laws regulating male sexual activity may be, so much more incredible would be Solonian laws about prostitutes in the early sixth century

Id. p. 41. Consider some factual legal farces today: men are forced to pay “child support” to women who raped them and bore a child from that crime. Men’s sexual activity is severely regulating, and has long been severely regulated. Today men aren’t permitted to have consensual sex of reproductive type for pleasure, free of ensuing legal obligations, even if they sign a contract to that effect. Men in U.S. colleges and universities today face draconian sex regulations far beyond anything Draco would have imagined. Based on fact-based understanding of law and comedy, Solon founding public brothels is not improbable.