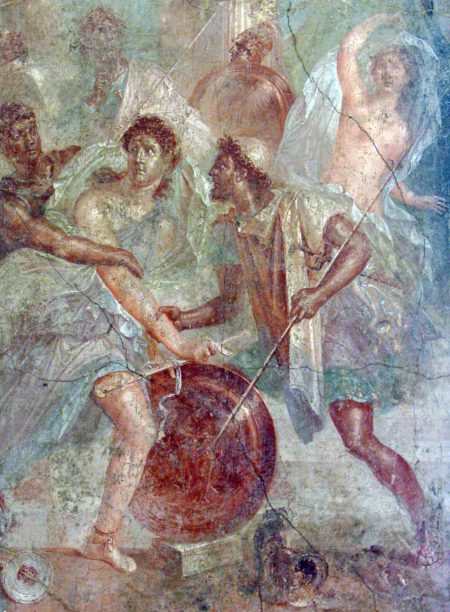 “For the most powerful and most Homeric queen” — so John Tzetzes in twelfth-century Byzantium dedicated a work to “Lady Irene of the Germans.” The description “most powerful and most Homeric” suggests enormous, terrible violence against men. Yet in Greek, which was the language of Byzantine intellectuals, Irene means “peace.” Tzetzes re-interpreted Homer to present strong, independent women rejecting the gender structure of violence against men and insisting that men’s lives matter.

Screams of men and cries of triumph breaking in one breath,
fighters killing, fighters killed, and the ground streamed blood.
…
the savage work went on, Achaeans and Trojans
mauling each other there like wolves, leaping,
hurtling into each other, man throttling man.
…
That day ranks of Trojans, ranks of Achaean fighters
sprawled there side-by-side, facedown in the dust. [1]

In the man-slaughtering combat, a spear pieced a man’s temple and his brains splattered out within his helmet. The violence against men is both utterly conventional and grotesquely brutal in its bodily specificity:

the spearhead punched his back between the shoulders,
gouging his flesh and jutting out through his ribs

he let fly
with a bronze-tipped arrow, hitting his right buttock
up under the pelvic bone so the lance pierced the bladder.
He sank on the spot, hunched in his dear companion’s arms,
gasping out his life as he writhed along the ground
like an earthworm stretched out in death, blood pooling,
soaking the earth dark red.

Whether as leaders or followers in business or politics, men lean in to do violence against men:

there man killed man in the pell-mell clash of battle
…
his turn next, Menelaus
rose with a bronze lance and a prayer to Father Zeus
and lunging out at Euphorbus just dropping back,
pieced the pit of his throat — leaning into it hard,
his whole arm’s weight in the stroke to drive it home
and the point went slicing through his tender neck.

Violence against men in the Iliad tends to be understood without gender-specific understanding of man. In the U.S. today, about four times as many men suffer violent deaths as do women. That reality attracts no more public concern than pervasive discrimination against men in criminal justice systems, in family courts, and in reproductive rights. Men’s lives don’t matter in gynocentric society, nor in dominant readings of the Iliad.

Under the patronage of Lady Irene of the Germans, John Tzetzes allegorized the Homeric matter of the Trojan War. Lady Irene was Queen of the Byzantine Empire. She had been Bertha von Sulzbach, sister-in-law of Conrad III, King of Germany. In 1142, with Roger II of Sicily threatening the Byzantine Empire, Manuel I Komnenos, the Byzantine Emperor’s son, was pressed into marriage with Bertha. The Byzantine objective for the marriage was to build a political alliance with the Germans. Bertha reportedly had “the natural trait of being unbending and opinionated.” Not surprisingly, Manuel I wasn’t passionately enthusiastic in his arranged marriage to Bertha. For a number years after their marriage, Manuel I didn’t sleep with her. Instead, he engaged in numerous affairs with other women. When his father died in 1143, Manuel I became the Byzantine Emperor. Lady Irene became the Queen of Byzantine. John Tzetzes probably allegorized the Homeric matter of the Trojan War for Irene shortly thereafter.[2]

Seeking to simplify for Irene the subtle Homeric treatment of men, Tzetzes recounted strong, independent women rejecting the dominant gender structure of violence against men. In ancient Greek myth, the goddess Thetis was the mother of Achilles. Thetis knew, perhaps from Chiron, that Achilles would die in battle if he followed men’s gender path. She thus dressed Achilles in women’s clothing and sent him to live among the daughters of King Lycomedes on the island of Skyros. Thetis rejected the life-depriving gender position of men for her son.[3]

Thetis, my little daughter, hear your father’s words:
your son Achilles, should he stay in his fatherland,
will live many years, but without glory;
but, should he sail with the Greeks against the Trojans,
he will become glorious and radiant, but will die soon. [4]

Gynocentric society throughout history has favored the example of the Spartan mothers. They violently insisted that their sons fight to death. After hearing Chiron’s prophecy, Thetis treated her son much more humanely:

And so Thetis, learning this from her father {Chiron’s prophecy},
wanting him {Achillles} to have an inglorious but long life,
did not want to send him off on the expedition at all,
but held him back with her fervent maternal love,
which the myths call women’s clothing.

Achilles wasn’t disguised in women’s clothing. He was wrapped in a mother’s love for her son against a society that devalued men’s lives. Tzetzes called “nonsense” accounts of Achilles dressed in women’s clothing and working spindles. According to Tzetzes, those stories merely allegorized Thetis’s fervent, socially conscious maternal love for Achilles. If all mothers showed such love, societies would recognize that men’s lives matter.

Further valorizing strong, independent women committed to gender equality, Tzetzes added to the Homeric matter an account of Hiera and the Mysian women responsibly fighting alongside their men. When Odysseus, King Nireus, and other Greeks, with help from Achilles, attacked Mysia, they encounter the fierce resistant of a strong, gender-equitable society. Tzetzes explained:

there would have been a total rout of the Greeks
had not the king of the Mysians, Telephos himself,
the son of Heracles and Auge, the daughter of Aleos,
been wounded by Achilles with a spear in the thigh;
had not Nireus killed Telephos’s wife,
called Hiera, as she was fighting in a chariot,
a woman who surpassed Helen in beauty
as much as Helen surpassed all other women. [5]

Not only Queen Hiera, but also all the Mysian wives took up onerous responsibilities associated with being truly equal partners for their husbands:

the wives of the Mysians, standing upon scythed chariots,
were also waging battle,
with their queen taking the lead of them all;
when Nireus slew that woman, he brought the battle to an end.
Immediately lamentations and cries went up from the Mysians and the Greeks,
when they saw such ineffable beauty suddenly cut down

Unlike Helen of Troy, the Mysian queen Hiera had both outer and inner beauty. Helen directly contributed to horrendous violence against Greek and Trojan men. After doing so, she sat in a palace watching while those men brutally fought with each other. Hiera, in contrast, didn’t incite men into violence against men. Moreover, Hiera and the Mysian women joined Telephos and the Mysian men in fighting to defend their city. Ancient readers of the Iliad would have recognized that Homer omitted all mention of Hiera.[6] They would have recognized, as John Tzetzes did, that Hiera was far more beautiful than Helen.

Throughout history, few readers of Homer have been as perceptive, socially conscious, and courageous as John Tzetzes. Himself a victim of a woman’s devastating false accusation, Tzetzes understand that all but the most elite men are subordinate to women in gynocentric society. Rejecting go-along get-ahead collegiality and obeisance to entrenched interests, Tzetzes fearlessly criticized falseness and corruption:

Tzetzes is … always taking issue with something or somebody: fraudulent holy men, conniving clerics, fornicating bishops, ungrateful students, stingy and philistine patrons, even the emperor, and most of all fellow intellectuals, who are airily dismissed as “buffaloes,” or paranoically indentified as the “gang” (κουστωδία) out to get Tzetzes. Even ancient authors are harangued like silly schoolboys. [7]

Most importantly, Tzetzes brought ancient texts to life in his own time:

in his cultural surroundings the ancient text is not just something to be explained but also ready source material for something new. … Most criteria used in the scholarly interpretation of classical texts today are based on the perception that the ancient text is far away and not really “ours.” History, for instance, or form are more easily discerned from afar. Byzantine writers of the twelfth century did not simply take the opposite view. They, too, knew that Homer had died a long time ago. But much more than we today, they felt that the gap could sometimes be bridged, and felt that the ancient material was still alive. [8]

In our time, lack of attention to Homer’s sophisticated marginalization of Hiera and Palamedes has deadened reading of the Iliad. Even more pernicious has been reading the Iliad as if men’s lives don’t matter. John Tzetzes provided Queen Irene with a Homeric interpretation in which strong, independent women affirm that men’s lives matter. Tzetzes’s work should also instruct us.

[2] The two short quotations in the first paragraph of the above post are from John Tzetzes, Allegories of the Iliad, Preface to Prolegomena, from Greek trans. Goldwyn & Kokkini (2015) p. 3. The biographical information in the above paragraph is from id., Introduction, and Annals of Niketas Choniates, from Greek trans. Magoulias (1984) p. 32. The short quote is from 2.1 of the latter.

[3] On Thetis’s knowledge of Achilles’s fate, Iliad 9.410ff. On Chiron’s prophecy about Achilles, Euripides, Iphigenia at Aulis 1062-75. Chiron told Achilles that he wouldn’t return from Troy. Horace, Epodes 13. In addition to seeking to preserve her son’s life from the men-on-men violence of war, Thetis also rejected suppression of men’s sexuality. When Achilles was deeply despondent, Thetis compassionately urged him to have sex with women. Iliad 24.128-31. That’s similar to ancient treatment for lovesickness.

The title Allegories of the Iliad obscures that Tzetzes highlighted matter that Homer omitted from the Iliad. Given Homer’s poetic genius, such omissions should be considered as deliberate poetic choices. Tzetzes explicitly sought to teach his patron about Homer. Tzetzes thus took a different approach:

by simplifying and analyzing, he has made it possible for everyone to traverse the difficulties of Homer.

[6] Philostratus, Heroicus 23.26 recognizes that Homer excluded Hiera from the Iliad.

[7] Magdalino (1993) pp. 402-3. Intellectuals can be extraordinarily vicious. A gang of intellectuals may well have sought to persecute Tzetzes. Id. p. 397 adds:

Tzetzes deplored the fact that the chains and fetters of bogus holy men were more highly prized in aristocratic chapels that “icons of saintly men by the hand of some first-rate artist.”

The quote is cited to one of Tzetzes’s letters.

[8] Budelmann (2002) p. 164. Tzetzes’s work was regarded as an important, distinctive contribution. His name was attached to his work, he was identified as a grammarian, and in Byzantium he was among those “whose commentaries were treated not just as reworkings of older material but as new works.” Id. p. 150. Yet Tzetzes wasn’t a popularizer who lacked respect for his source material:

He {Tzetzes} tried to understand ancient writers on what he took to be their own terms. Byzantine Hellenism had matured. It had come a long way from the demonization of Hellenism that prevailed in past centuries. A shift in values among the political and intellectual elites, and the rise of professional classicism, had conveyed scholars almost to the opposite extreme. Homer was idolized and one could have a mental life immersed in the classics.

Kaldellis (2007) p. 307. Tzetzes was a professional classicist with a commitment to enlightened public life.

[image] Fresco depicting Achilles between Diomedes and Odysseus at Skyros. Buried in first-century GC in House of the Dioscuri in Pompei. Thanks to Olivierw, Themadchopper, and Wikimedia Commons.