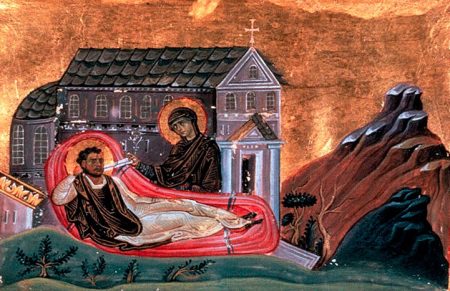 A kontakion of Romanos the Melodist boldly proclaims a new ruler of the world. Mary the mother of Jesus declares:

I do not cast aside the grace I took from you, Lord,
nor do I obscure the worth I gained in bearing you,
for I rule over the world.
Since I carried your might in my womb I have might over all things. [1]

Jesus the Lord is the nominal head of the Christian Church. His mother Mary rules over the world in everyday life.

Mary has been interpreted as the new Eve. In Romanos’s kontakion on the nativity, the old Eve speaks before Adam does. She orders him to arise from his “deathlike slumber.” She tells him to “listen to me, your wife.” Adam made the mistake of marrying. Eve knew of Adam’s disappointment, depression, and anger:

Whenever he recalls delectation he turns against me
crying out — Would you had not sprung forth from my side;
better not to have taken you as my aid,
for I would not now have sunk to these depths [2]

Adam continues to appreciate women’s sensual appeal. Yet he cannot forget what his wife has done to him. Moreover, he resents his wife issuing him commands as if he were a slave, particularly while he is taking a nap:

Adam hearing the words his wife wove him
at once shook off the weight from his eyelids,
lifting his head as if from sleep
opening the ear blocked with deafness cried out:
— I hear sweet warbling tones of delight
but the melodist’s chant no longer enchants me.
It is a woman, and I fear her voice,
for I have known and shrink from the feminine sex.
The sound draws me, it is clear,
but the instrument fills me with fear, lest as of old she lead me astray. [3]

This was long before modern totalitarian sex regulation. Men today have much stronger reasons to fear women than Adam did.

Adam turns to Mary for salvation from gynocentric oppression. He tells Eve that he is leaving her:

I have felt the breath of life, wife, of the giver of life,
dust as I am and soulless clay,
giving me soul; for now
made strong by her perfume, I’ll make my way to her who brought forth
the fruit of our life, full of grace. [4]

But Adam doesn’t follow the way of abundant life and joy. He abjectly pleads with Mary for mercy:

Aged in Hades, Adam, first-created as I am
take pity on me, daughter, your groaning father.
Behold my tears and have mercy on me,
lending kind ear to my wailings.

Men must stop begging women for mercy. The Latin poem Lucis orto sidere, written about 1200, depicts both men’s folly and men’s redemption. Creation waits with eager longing for men to embrace their being as children of God. Men must be active agents of incarnation.[5] While the labor may be painful, the fruits of men’s liberation will be as numerous as stars in the sky and sand on the seashore.

[1] Romanos the Melodist, On the Nativity II, 2.1-4, from Greek trans. Alexiou (2002) p. 417. Carpenter (1970), vol. 1, pp. 13-21, describes the manuscript sources and provides an alternate translation. An English translation of Romanos’s On the Nativity I is available online. Romanos wrote in early sixth-century Constantinople.

Underscoring wives’ dominance of their husbands, Potiphar’s wife declares to Joseph, “Your master {Potiphar}, as you know, obeys my wish in everything.” Romanos the Melodist, On Joseph II, 15.3, trans. Carpenter (1970) vol 2, p. 110.

Appealing to Mary, Eve declares that Adam’s weepings cause her to suffer more than him:

you see how much more
my soul is afflicted in misery because of Adam’s weepings.

9.3-4, p. 423. That’s like the claim that women suffer more from war, because their husbands, fathers, and and sons are killed and women are thus deprived of help and support.

[3] The “sweet warbling tones of delight” that Adam hears are those of Mary, not those of his wife.

[4] Mary the mother of Jesus has been highly venerated from the time of early Christianity. The kontakion’s refrain, “full of grace,” is similar to the more expanded refrains of rejoicing with Mary in the Akathistos. Carpenter attributes the Akathistos to Romanos. Id p. 13, n. 2. In any case, the Akathistos is an early and highly influential Christian hymn centered on Mary.

[image] The Virgin Mary instructs Romanos the Melodist. Illumination from the Menologion of Basil II. Dated 985 GC. Thanks to Wikimedia Commons.