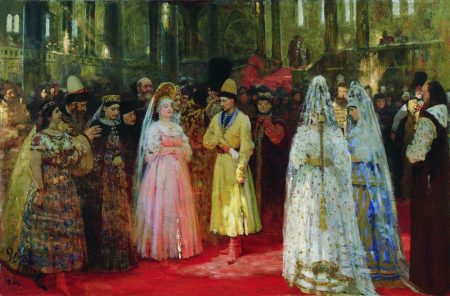 Men in pursuing intimate relationships are usually attracted to beautiful women. Today, that preference tends to be disparaged. For being attracted to a woman who was not fat, one young man recently was called bigoted and mean, and he was slapped. At a much higher level of social salience, the Harvard men’s soccer team recently had their whole season canceled because some team members were privately rating the attractiveness of members of the women’s soccer team. Simply stating that young, slender, warmly receptive women are much more sexually attractive than old, fat, bitterly men-hating women is well on its way to becoming a criminal offense in modern, democratic societies.

Compared to such societies, medieval Byzantine society was more tolerant and allowed greater personal freedom. In the fourteenth-century Byzantine romance Belthandros and Chrysantza, the King of Eros ordered Belthandros to select the most beautiful woman from among forty noble women. Belthandros told one that she had “flabby and superfluous flesh.” After she stepped forward for his judgment and stepped back from his rejection, her body was “drenched with much perspiration.” Belthandros rejected other women for having a frigid mind, red and bleary eyes, a unibrow, an improperly proportioned body, bad teeth and hairy hands. The woman Belthandros selected as the most beautiful he described as having fallen from the bosom of the moon:

Her hair is the color of gold and matches her figure. Its thickness is like that of the grass of Paradise or of celery in a garden. All the graces of the world seem to sit upon her and make her their dwelling. Certainly, beyond any doubt, her forehead bears your {the King of Eros’s} imprint of mottled gold. If a man casts a glance at her eyes, they immediately tear at the roots of his heart. In the depths of their lake tiny cupids swim, shoot their arrows and sport. Art created her jet-black eyebrows and with consummate skill made them bridges. The Graces forged the fair one’s nose and to the Graces belong her mouth and her pearly teeth. Her cheeks are rose-red, her lips have the color of nature. Certainly, her mouth is perfumed. Her chin is round in shape, she is tall and her arms are white and delicate, her neck is as from a lathe. Her waist is slender and shows the great skill of the one who fashioned it like a thin reed. As for the angle of her neck and her litheness! Indeed, her body is so perfect in composition that the Graces seem to come from her. Her bosom is a paradise of love. The apples {of her breasts} shine even on a casual glance. Her look and gait are miraculous. When she walks with confidence and glances up and down, she ravishes your senses and tears at discretion. [2]

This description strangely omits the women’s buttocks. Nonetheless, Belthandros and Chrysantza indicates that men in medieval Byzantium had considerable freedom of expression in judging women’s beauty.

The marriage of Sophia of Montferrat and John VIII Palaiologos in Constantinople in 1421 underscores the importance to men of a bride’s appearance. John agreed to marry Sophia, sight unseen, as part of a grand strategy to build a political alliance and gain military aid for Constantinople. However, aspects of Sophia’s appearance turned out to be unpleasant:

The young woman was extremely well-proportioned in body. Her neck was shapely, her hair blondish with braids flowing down to her ankles like glimmering golden streams. Her shoulders were broad and her arms, bosom, and hands well-proportioned. Her fingers were transparent. She was tall in stature and stood very straight — but her face and and lips, the condition of her nose, and the arrangement of her eyes and eyebrows were extremely unpleasant. In general, she may be described in the words of the vulgar adage: “Lent from the front and Easter from behind.” [3]

John never slept with his wife Sophia. After five years of sexless marriage, Sophia returned home and became a nun in the Dominican convent at Trino.

Byzantine mothers recognized men’s interest in women’s beauty. The Emperor’s wife Eudocia in 882 arranged a bride-show for her son Leo. She selected twelve beautiful women from her own native city. She interviewed them and then narrowed the group to three for closer examination:

All the rest she ordered to go home, after she had provided them with many presents and much money. Only these three she took with her to the Palace. Examining them in a bath and finding that the saint {Theophano} by far surpassed the other two in beauty, she dressed her in imperial garments, took her by the right hand and went in to see her husband the Emperor Basil. Throwing her at his feet, she proclaimed her a worthy bride for their son. [4]

At his wife’s behest, the Emperor forced their son Leo to marry Theophano. While Theophano apparently was quite beautiful in the nude, Leo found her unattractive in other ways. He complained, “{I} did not marry her of my own free will, but out of fear of my father, and greatly distressed.”[5] Soon after marrying Theophano, Leo took a mistress. About five years after their marriage, Theophano retired to a convent and lived as a nun. After she died, Leo promptly married his mistress.[6] Even if a mother makes a thorough inspection of a potential wives in a bride-show, her son’s marital pleasure isn’t ensured.

In Byzantine bride-shows, the royal mother dominated the selection of her son’s wife. For example, the Byzantine Empress Irene in 788 organized a bride-show for her eighteen-year-old son Constantine VI. Under her orders, envoys searched across the full expanse of the Empire for suitably beautiful women. The envoys carried an imperial measure, an ideal portrait, and a shoe to evaluate women’s height, facial appearance, and feet.[7] Thirteen promising candidates were brought to the Byzantine capital. Empress Irene and Stauracius, the head of government, reviewed the women. They judged Maria of Amnia to have the most beauty, intelligence, and grace.[8] Constantine VI, however, disliked the choice of Maria of Amnia for his wife. He soon came to hate her. He even claimed that she was trying to poison him. In 795, Constantine sent Maria and her daughters to live in convent. He then remarried in the following year.[9] In remarrying, he presumably chose his own wife.

Men deserve the right to choose freely a beautiful wife according to their own sense of beauty. In four out of the five historically documented Byzantine bride-shows, the mother of the groom organized the bride-show and either chose or effectively rigged what sort of woman became her son’s wife. In the remaining bride-show, the mother couldn’t dominate because she apparently was dead.[10] A leading historian of the Byzantine bride-shows observed:

Today, parents who understand the extent of anti-men discrimination in family courts might well encourage their sons not to marry. But if a man wants to get married, he should be able to have a bride-show, judge the participants as he considers appropriate, and make his own free choice.

[1] On the historicity of the bride-shows, Treadgold (2004). On women at the top of Byzantine society, see the highly regarded gynocentric scholarship of Judith Herrin, e.g. Herrin (2001) and Herrin (2013). Men’s opportunities to ascend to the top of society are much more tightly circumscribed than women’s are.

[2] Belthandros and Chrysantza, from Greek trans. Betts (1995) p. 18. The previous short quotes are from id., pp. 15-7. Belthandros went on to marry the woman he selected as most beautiful, but that marriage didn’t follow directly from the beauty pageant.

[3] Doukas (fifteenth-century Byzantine historian), Fall of Constantinople, from Greek trans. Magoulias (1975), quoted and revised by Gilliland Wright (2013) p. 135. The vulgar adage, “Lent from the front and Easter from behind” suggests the frigidity of death and Boccaccio’s sense of the resurrection of the flesh. A current, less cultured version of that adage is, “She’s a butterface {but-her-face}.”

The bride selection process described in Esther 2:2-18 involved the king sleeping with each candidate successively. That rather modern selection process goes further than having one’s mother inspect naked wife-candidates. Both procedures help to lessen a concern expressed in Theophrastus’s Golden Book on Marriage.

[6] Theophano died about 897. Leo VI’s mistress and subsequent wife was Zoe Zaoutzaina. She died about 899. Leo then married Eudokia Baïana, who died in 901. Despite strong church opposition, Leo married a fourth time (to Zoe Karbonopsina).

All of Leo’s wives were “immortalized by unofficial sainthood and by imperially sanctioned art.” Gerstel (1997) p. 707. A contemporary commenter related the popular adoration of Theophano to Lucian’s account of Alexander’s attempt to deify his close friend Hephaestion:

the same thing has also happened in our time and everybody is seized by a hysteria characteristic of women so as to proclaim the emperor’s {late wife} Theophano a saint.

[7] The specific characteristics of the imperial measure (βασιλικóν μéτρον), the ideal portrait (λαυρᾶτον), and the shoe (τζαγγιον) aren’t known. The original Greek terms are given in Rydén (1985) p. 175.

This heart-wrenching disparity between the fictionalised ideal of courtship and the lived reality of elite women should instill in us a healthy sense of caution as we approach the problem of Byzantine bride shows.

The merciful man’s granddaughter {Maria of Amnia} suggested to the others, “My sisters, let us make an agreement among ourselves of the kind called sisterhood by adoption that the one of us who becomes empress should take care of the others.” But Gerontianos’ daughter, who was very rich and good-looking, answered, full of conceit, “I know for certain that I am the richest and noblest and best-looking and that the emperor will choose me.” Maria blushed and said no more. 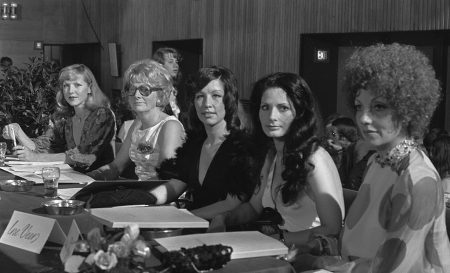 [10] On Stauracius’s mother apparently being dead, Treadgold (1979) p. 409. In three of the five bride-shows, the father was dead. Here’s a table of the bride-show participants and parents. Two facts underscores mothers’ dominance in organizing and running the bride-shows: a mother (Irene) organized the first one, and a mother (Eudocia Ingerina) dominated the bride-show in which the father was also living. Vinson (1999) discusses how bride shows affirmed traditional gender roles.

Having the father run the bride-show, which was less consistent with traditional gender roles, also didn’t serve the son’s interests. Nicephorus I, Stauracius’s father, organized and ran the bride-show for Stauracius in 807. Nicephorus reportedly debauched two participants. He married his son to Theophano, a less beautiful participant. Moreover, Theophano had already been betrothed and had already had sex with her betrothed many times. Treadgold (1979) p. 401.

In creating the illusion of romance and equality, the accounts of the Byzantine bride shows conceal the darker truth that their focus on female beauty serves as a means of disempowering the bride and her family and placing the wife under the exclusive control of her husband. The marriages arranged in this manner can thus be seen as a reversion to a type of wedlock common in the old Roman republic …

Vinson, Martha. 1999. “The life of Theodora and the rhetoric of the Byzantine bride show.” Jahrbuch Der Österreichischen Byzantinistik. 49: 31-60.