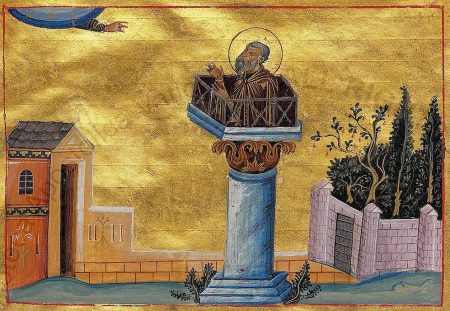 Mango’s failure to appreciate Byzantine literature goes well beyond the Komnenian-era Byzantine novels. With respect to the wildly creative Prodomic poems, Mango declared, “as literature they are pretty {sic} disappointing.” The romance Kallimachos and Chrysorroi includes an outrageously funny parody of dragon-slaying and a profound fable about men having to earn love. Mango described Kallimachos and Chrysorroi as “nearly all verbiage.” Mango generally found in Byzantine writers “no real conception of ancient Greek literature.” The classicist of classicists John Tzetzes, a Byzantine writer who produced lengthy scholarly commentaries and interpretations of ancient Greek literature, might respond that a anyone believing such a claim must be “possessed and epileptic, a moonstruck son of a goat.”[4] The progymnasmata (rhetorical exercises) of twelfth-century Byzantine teacher Nikephoros Basilakes are a far better resource for studying classical literature than almost any work from the mass of narrow-mindedly cliquish recent classical scholarship.

To a modern observer this literature appears deficient in many respects. It has irony, often heavy-handed, but practically no humour. With very few exceptions, it is not concerned with love, other than sacred or parental love. It has no ribaldry and no joie de vivre. Byzantine literature is solemn, even sombre, in tone and is probably at its best when describing death, disasters, and the instability of human existence.

Early Byzantine hymnist Romanos the Melodist would imagine Mary ordering Jesus to call down woes upon Mango. The Byzantine satirist Mazaris or one of the articulate animals in the Byzantine Entertaining Tale of Quadrupeds might say that a potato stuck in Mango’s ass is causing his head to filled with crap. The Byzantine scholar John Italos probably would punch Mango in the face. Is it any wonder that Mango imagined a Priapic ass-driver statute in Constantinople to be a bath attendant wearing a loincloth and a helmet?

Anti-feminism was a fundamental tenet of Byzantine thinking until the sporadic introduction of western ideas of romantic love in about the twelfth century. The sight of a woman, we are told, is like a poisoned arrow: the longer the poison remains in the soul, the more corruption it produces. There was, of course, such a thing as a virtuous woman: it was the one who never showed her face to a stranger. Generally, however, she was a crawling worm, the daughter of mendacity, the enemy of peace. The catalogue of her vices and weaknesses is endless: she was frivolous, garrulous and licentious. Above all, she was addicted to luxury and expense. She loaded herself with jewelry, powdered her face, painted her cheeks with rouge, scented her garments and thus made herself into a deadly trap to seduce young men through all their senses. No amount of wealth was sufficient to satisfy a woman’s desires. Day and night she thought of nothing but gold and precious stones, of purple cloth and embroidery, of ointments and perfumes. Were it not for sexual desire, no man in his right mind would wish to share his house with a woman and suffer the consequent injuries, in spite of the domestic services she performed. That is why God, knowing her contemptible nature, provided her from the beginning with the weapon of sexuality.

Oblivious to the sorrows that awaited them, Byzantine men continued to marry … if marriage was delayed a young man would have recourse to prostitutes and develop a taste for laughter, flippant speech and indecorous behaviour. A woman of good family would refuse to satisfy such yearnings with the result that the bridegroom would begin neglecting her after a couple of nights.

According to Mango, everyone in Byzantium knew that women were horrible, but men were so stupid that they continued to marry women even given the availability of pleasing prostitutes. Mango further disparaged men by blaming them for sexless marriages. Such irrationality and anti-men animus has sadly become pervasive among scholars.[6]

According to Mango, marriage meant misery. Roman men were reluctant to marry. Why would Byzantine men be willing to marry? Many scholars pretend to believe that men throughout the ages have treated their wives as property.[5] Yet acquiring a wife, according to Mango, wasn’t beneficial in Byzantium:

No matter what precautions were observed, marriage was a source of endless turmoil. It was a kind of mutual enslavement, made only worse if the spouses were of unequal fortune. It destroyed tranquillity by the presence of children and by financial worries. If a man sought an escape by involving himself in civic activity, he would inevitably be soiled by sin: he would get irritated at his fellow-citizens, endure insults, adopt insincere postures. The evils of a second marriage were correspondingly greater: unseemly in itself, it created discord in the family so that even the ashes of the departed spouse became a source of envy.

Byzantium didn’t impose the “four seas” law of paternity on husbands. Child support and spouse support laws were probably less biased against men in Byzantium than they are in many countries today. Marriage in Byzantium probably wasn’t on average more miserable for men than marriage is today.

Mango’s Byzantium fallaciously describes Byzantine literature and Byzantine anti-feminism. The recent non-scholarly documentary movie the Red Pill much more convincingly depicts anti-meninism. Along with much other somber, authoritative scholarship in recent decades, Mango’s Byzantium is a work of comedy and tragedy. Byzantine literature is both delightful and instructive. As for anti-feminism, Byzantines knew nothing about that anachronistic concept.

[1] Mango (1980) pp. 3-4. Regional Byzantine leaders took Constantinople from the western crusaders in 1261. The Roman Empire thus arguably continued to exist until the Turkish overthrow of Constantinople in 1453.

the book is immensely boring. Most of it is little more than long lists of relatively unpronounceable names and dates no one will remember even a few seconds later. He makes no attempt to make the history interesting, to introduce narrative, or to paint the “characters” of history in dynamic, truly human ways. Instead, for Mango, there is no narrative, no individual stories, really no cause and effect. And there is most certainly no humor.

[5] Margo Wilson and Martin Daly have been banefully influential proponents of the “women as men’s property” delusion. For brief analysis and references, see note [4] in my post on primatology and criminalization.

[6] Mango’s claim “Anti-feminism was a fundamental tenet of Byzantine thinking” has been cited as a broadly accepted, authoritative pronouncement. See, e.g. Taft (1998), p. 28, and White (2003) p. 39. Galatarioutou declared a variant:

Misogyny was a fundamental tenet of Byzantine thinking.

Galatariotou (1984) p. 66. Here’s analysis of misogyny in relation to the myth of patriarchy.

gynaikodoulos, a man enslaved to women; gynaikotraphes, a man reared by women and therefore effeminate (John Chrysostom, PG 61:278.54); and gynaiazo, being addicted to women (Theodore of Stoudios, PG 99:1368A).

Rather than being bad words, these perceptive terms point to effects vitally important for understanding men’s social position and literature of men’s sexed protest.

White, Linda L. 2013. The ideology of the feminine in Byzantine historical narrative: the role of John Skylitzes’ Synopsis of histories. MA Thesis. Department of History, University of Manitoba. Winnipeg, Canada.

One thought on “Mango on Byzantine literature and Byzantine anti-feminism”