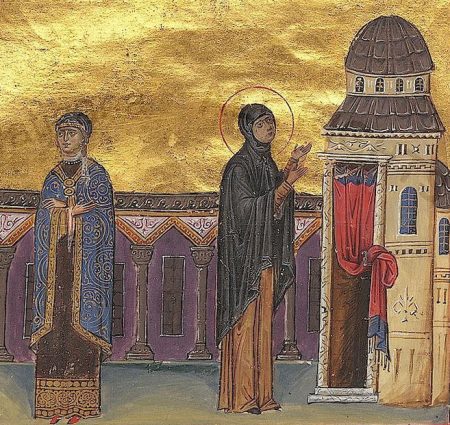 Social constraints on men are tighter than those on women. For example, men are punished more severely than women for the same crimes, and men’s sexuality is much more harshly regulated. Societies exploit men as tools for producing goods and fighting wars. Social policing keeps most men within those narrow roles. Comparing social valuations of cross-dressing men and women in a rhetorical exercise of the sixth-century Roman sophist Choricius of Gaza and hagiography of Saint Pelagia shows tighter social constraints on men.

In Choricius’s rhetorical exercise, a general wore women’s clothing to defeat his city’s enemies. A prior general had recently suffered a terrible defeat for the city. The city was then besieged and in grave danger. Seeing no alternative, the second general dressed in women’s clothing and made a nocturnal ambush on the enemy. The second general thus saved the city and became a war hero. The city had a law that a war-hero be memorialized in a painting depicting him carrying out his heroic acts. That would mean memorializing the general in a representation of him wearing women’s clothes.

I saw that, since our strength had grown weaker and the enemies’ increased, the situation demanded some special contrivance from me; I was pondering how to rebuild the city after it was conquered and was considering the other wretched things that conquest usually causes, especially the most bitter thing of all, the customary excess of the enemy while they hold power in the city, when they outrage bedrooms, assault maidens, and do not spare the bloom of youth. I did not hesitate, you see, to appear as a woman to the enemy so that I might rescue the women from their excess, nor to dress unnaturally so that the youth might not suffer anything unnatural. [1]

Women have much more privilege with respect to cross-dressing. Consider, for example, a tenth-century account of the life of Saint Pelagia. Pelagia was a leading actress-dancer in Antioch. She converted to Christianity and became an ascetic monk who lived in a small cell in Jerusalem. Pelagia as a monk became a man renowned for piety and working miracles. When Pelagia died, monks gathered from afar for her funeral:

When they approached the body and extended their hands to anoint it with perfumed oil, they saw a strange sight: a woman, who had been concealing her gender, and who like a man had performed deeds of men, and indeed obtained for her labors even greater benefit than men. [2]

Women commonly get greater benefits than men for the same labor. Women also have more social freedom than men. Pelagia was greatly honored as a cross-dressing woman:

Everyone began to strive equally, each trying to outdo the other, competing to attend the funeral, and vying just to come near the body and to even touch some part of it. In this way, with many candles, and even greater honor, the honorable body of Pelagia was buried, escorted and carried by holy and pious men.

Pelagia came to be widely regarded as a saint. As a woman, Pelagia had the freedom to dress as a woman or as a man without suffering social disparagement and shaming.[3]

The type of clothing that one wears is much less important than experiencing the human capabilities of being alive and having sex. Nonetheless, anti-men gender inequality in cross-dressing is telling. Men historically have been constrained to a relatively narrow gender role. More and more enlightened persons are condemning oppressive social constraints on men’s lives and advocating for men’s liberation.

[1] Choricius of Gaza, Declamation 11 (“<The War-Hero>”) sec. 33-4, from Greek trans. Terry L. Papillon in Penella (2009) p. 227. The general described his wearing women’s clothing as “completely inappropriate for me” and “unseemly” in sec. 104-5, trans. id. p. 239. Robert Penella has pointed out that Choricius, in his Defense of Mimes, defended mimes cross-dressing on the stage. Choricius thus challenged Christian criticism of secular theater.

[2] Symeon Metaphrastes, Menologion, “Life and Conduct of Saint Pelagia of Antioch” para. 25, from Greek trans. Papaioannou (2017) pp. 81, 83 (Greek on facing pages). The subsequent quote is from para. 26, trans. id. p. 83. The life of Saint Pelagia is set in the fifth century in the area of Antioch, Jerusalem, the Jordan, and Jericho. It apparently first appeared in Greek, and then spread to Latin, Syriac, Arabic, Armenian, Georgian, Slavonic, and then European vernaculars. Id. p. 289, introductory note.

[image] Pelagia before and after her conversion. Detail of illumination from the tenth-century Menologion of Basil II, Vatican Library, Ms. Vat. gr. 1613, image 98. Thanks to the Vatican Museum and Wikimedia Commons.