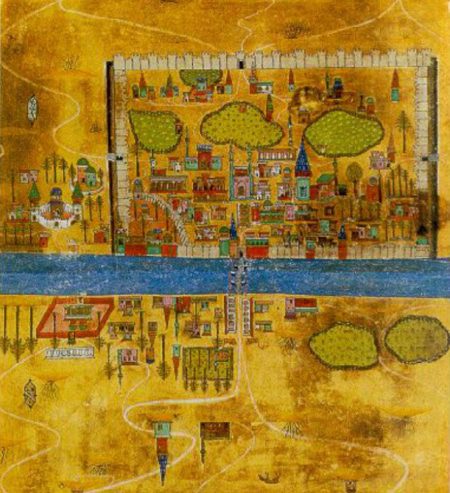 An extraordinary work of classical Arabic literature from early eleventh-century Baghdad subtly critiques the sexual oppression of men. The towering, central figure of this work is the eminent littérateur Abū al-Qāsim. He had strong, independent sexuality like that widely celebrated for women in high-income countries today. Despite his great literary sophistication, Abū al-Qāsim himself, like the leading fourteenth-century Welsh poet Dafydd ap Gwilym, internalized the social construction of men’s sexual culpability.

At a lavish, elite banquet, Abū al-Qāsim celebrated the vibrancy and dynamism of his penis. After asking a professional singer to play music for a specific Arabic poetic meter, Abū al-Qāsim jumped up and began to dance and recite poetry. He poetically exulted:

The hardness of the prick and the softness of the shit
In the ass: the two together are what please me

O affliction, O the evil of my luck — but how
Sweet are the two to me when they get together

Not at all homophobic, Abū al-Qāsim enjoyed having sex with both men and women. Moreover, he was unafraid to speak of the sexual attractiveness of sexually attractive persons. He even expressed openly, in the presence of witnesses, his own sexual desire, even as an old man, for sexually attractive persons. In many high-income countries today, Abū al-Qāsim surely would be subject to a mass public campaign of shaming and demonization, as well as severe public punishment through loss of employment, asset stripping, and incarceration.

Despite Abū al-Qāsim’s cultural sophistication and expressive courage, he attributed culpability for moral wrong to the penis and exonerated the vagina. After reciting the above poem, Abū al-Qāsim recited another, deeply telling poem:

In my opinion, there is no reason
For rebuking the pussy

Nor can it be blamed for sin,
Not even for a single day in time

It’s the prick — my prick — that you should curse
For indeed it’s a dog’s prick!

A prick that yearns to fuck
Every hairy pussy

Men’s sexuality has been socially disparaged and devalued throughout history. From the persecution of men for adultery in Code of Hammurabi written about 4,000 years ago to the French Revolution’s failure to provide men with legal paternity choice, to deeply gender-biased current public discussion about men raping women, men’s sexuality is socially constructed as a destructive force requiring strict social control. Can human reason even recognize this fundamental social injustice? Abū al-Qāsim continued dancing until he fell to the ground “from breathlessness and too much drinking.”

All the quotes above are from the Arabic Ḥikāyat Abī al-Qāsim {The Imitation Abū al-Qāsim}, attributed to al-Azdī. This work probably was written in early eleventh-century Baghdad. The English translations are from St. Germain (2006) pp. 401-2. I have made some non-substantial changes to St. Germain’s translation for ease of readability for the general public.

The twelfth-century Byzantine novel Drosilla and Charikles seems to provide a redemptive perspective on Abū al-Qāsim through the dancing old woman Maryllis.

[image] Dual perspective on the public world of medieval Baghdad. The Tigris River represents the divide between the dominant, orthodox perspective on gynocentric space and the upside-down reality of men’s oppressive social position. By Nasuh Al-Matrakî, an sixteenth-century Ottoman artist-scholar. From illuminated manuscript held in Topkapi collection, Bilkent University. On Al-Matrakî, see the well-documented article Ayduz (n.d.). The specific copy of the manuscript illumination is from a Smithsonian Magazine article that provides no attribution for the image.