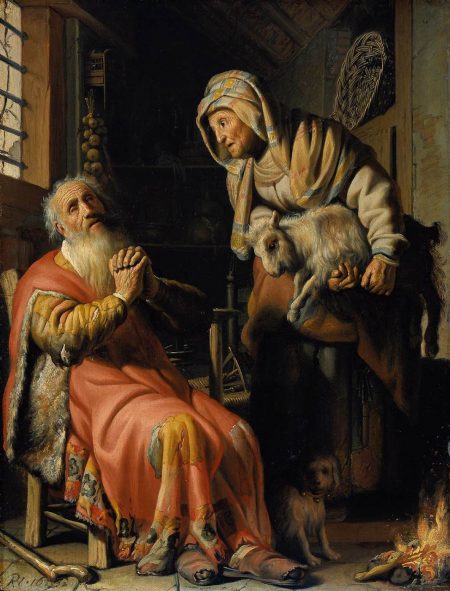 Women are wonderful. Males are evil. The male and female genders are equal. Gender equality advances whenever women come to dominate a group, such as college graduates, doctors, and elementary school teachers. Compared to this modern dogma, medieval thinkers had a more sophisticated understanding of gender.

Medieval women weren’t taught to fear rapists everywhere. In the Middle Ages, a man’s penis wasn’t regarded as a weapon of violence. Ancient literature recognized that a penetrating penis provides pleasure to the encompassing body.

Nonetheless, disparaging and oppressing men’s sexuality has a long and sordid history. The relatively enlightened Middle Ages wasn’t immune to that hateful social direction. Matthew of Vendôme’s twelfth-century expansion of the Book of Tobit depicted Sarah as fearful on her wedding night:

The maiden is afraid and is drenched in tender tears: the
first little lump of earth fears the use of the unknown plowshare.

A plowshare is an inanimate object with a metal blade on the end. That’s a frightening and dehumanizing metaphor for a man’s penis. Another metaphor similarly degrades men:

An inviolate lump of earth fears the ditch-digger; the honor of
virginity becomes afraid at the approach of the male.

Ditch-digging is a low-status, poorly paid job. Men throughout history haven’t been adequately compensated for their erection labor. Women shouldn’t fear males. Women should have compassion for men and should work to raise men’s social status. A good start would be for more women to declare publicly profound appreciation for a beloved man.

While medieval literature in some places shows deplorable contempt for men, it also expresses a sophisticated, multi-faceted perspective on gender. Consider Matthew of Vendôme’s rendering of the scene in which Tobit sent his son Tobias, with a guide, on a journey to collect money.  Both parents lament Tobias’s departure, but his mother Anna’s emotions dominate:

The father and mother make lamentation, and the son bids both
goodby; they depart and begin their journey.
Anna, the mother, rushes to tears; redoubles her lamentations
and complaints. She refuses to conceal that she is a mother.
The one who pleased her by his presence distresses her by his absence;
with him present there was gladness, but grief at his going.
The mother’s love shows her to be a mother; the sad wife finds fault
with her spouse, as her dutiful affection bids.

Anna is a loving mother. At the same time, as a wife she readily finds fault with her spouse. She complains at length:

Alas, would that the money had never been sought! For this reason
you are a father bereft of his son, and I lament, bereft of my child.
Why has my only salvation gone away, my care, the defense of my
old age, the glory of his father, the honor of his mother?
Why did he depart from us? The glory of our son used to ward
off poverty; as he leaves, our salvation leaves.
When he was here, our son heaped up riches; when we observed
the love of our son, every distress was pleasing.

Money matters, and it isn’t easily acquired. Sending Tobias to collect a debt owed to his blind father is reasonable. Many husbands would be rightly annoyed at their wife criticizing them for something like that. Within this specific story, Anna isn’t depicted as wonderful even though she is a woman.

Another scene similarly depicts both Anna and Tobit across a wide range of emotions. When Tobit / Tobias was blinded by bird poop, he could no longer provide alms for poor neighbors, as he had frequently done.[2] He also could no longer gaze upon his wife in fulfilling his marital sexual obligation. She responded with compassion:

She strives to preserve intact the rights of the marriage-bed,
although that crop is rare when the farmer is failing.
With her companionable soul, she has compassion on her spouse;
she supports, obeys, soothes, honors and loves her husband.

She also took up the husband’s traditional burden of earning money for his family. Yet her husband responded as if she had engaged in theft:

She soldiers for the food which her weaving furnishes; she gives
these few things to her husband with much sedulity.
She brings to Tobias the means of life acquired by her hands;
her intention compensates for what her deeds cannot do.
When she returns at day’s end, the little goat that the industrious
woman brings is heard by her perceptive husband.
What he cannot observe, his ear declares; the one
sense is thriving after the loss of the other.
“Return the stolen!” Tobias cries. “See that
there is no plunder. Our own goods please, but stealing harms us.”

Wives can and should work lawfully to support their husbands. That’s what this wife did. Yet her husband wrongly assumed that she had stolen the little goat that she brought him. She understandably responded angrily:

Anna is grieved, her nature returns; she shows herself
in the speech of her sex and scolds in a harsh tone:
“Your vain hope has perished; it is clear from the loss
of your sight what good your fruitless alms do.”

No benighted blank-slaters, medieval thinkers understood that nature (the flesh) and nurture (the spirit) are closely intertwined. In a metaphor bringing within a single man both male and female genders and describing characteristic behavior of husbands and wives under gynocentric oppression, Tobias declared:

A man has a double impulse: flesh and spirit. The one
strives to lower the worth of the other.
Spirit is the husband, flesh is the wife. The household enemy,
the wife, oppresses the husband with her ready guile.
The harmful flesh wages war against the soul. The wife harms
the husband; the husband seeks the wife’s friendly help.
She harms, he teaches; she tears down, he builds up;
He rewards, she torments; she oppresses, he groans.

Men must do more than just groan within the household. The power imbalance of gynocentrism, which goes all the way back to Adam obeying Eve, sets men and women in conflict with themselves and with each other. Bringing flesh and spirit, nature and nurture, woman and man in harmony with each other requires men to reject obedience to women and to demand equal rights in raising children.

The ideal of gender equality has degenerated into an intellectual farce. Matthew of Vendôme’s twelfth-century Tobias expresses modern romantic ideals of a man and woman being destined for each other and growing old together. Yet Tobias also provides a critical perspective on gender. Study of Tobias and other medieval Latin literature can enlighten understanding of gender relations and advance social justice.

[1] Matthew of Vendôme, Tobias (Poetic paraphrase of the Book of Tobit {Paraphrasis metrica in librum Tobiae}) ll. 1137-40, Latin text from Müldener (1855); English translation adapted from Pepin (1999) p. 118. This quote and subsequent others above have no parallels in the Book of Tobit.

The Latin text in Patrologia Latina 205 has many, relatively minor, differences from Müldener’s text for the above quotes. I unfortunately wasn’t able to consult Munari (1982), which is the currently best available Latin text.

[2] In Matthew of Vendôme’s Tobias, Tobit and his son Tobias of the Book of Tobit are both named Tobias.

[image] Tobit receiving little goat from Anna and accusing her of stealing it. Painting by Rembrandt, 1626. Catalogue number: Bredius 486. Via the Web Gallery of Art.