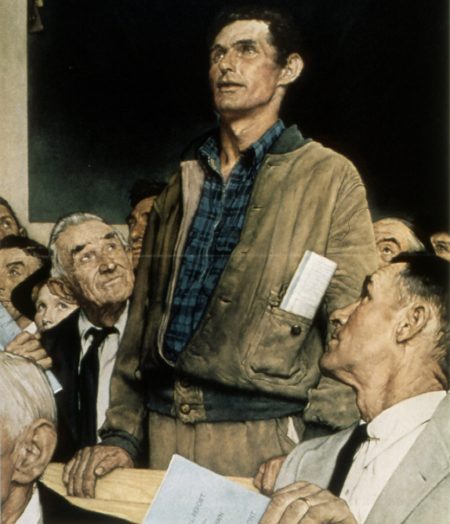 A learned man told Poggio a story about a whore who ridiculed Venetian cuckolds by claiming that they had enormous penises. This whore was welcoming and inclusive in providing her important service to men:

The whore was, he said, a commonly known Venetian to whom men of diverse nations came.

The whore’s embrace of diversity gained for her valued knowledge:

Someone asked her one day the nationality of the men who had the largest penises that she had seen. The woman without hesitation responded that it was the Venetians. “Those,” she said, “have such a long Priapus, that although they are often away traveling in the remotest provinces beyond the seas, they still copulate with their wives and have children.”

Compared to men, women experience less pressure to perform sexually and typically are less concerned about the size of their genitals. However, women who understand themselves as being like men can mis-interpret the quality of their genitals. Consider the case of a woman and man committing adultery in early fifteenth-century Sienna:

Immediately after having sex with her, the adulterer insultingly said that he had never found any other woman with such a wide vagina. She, supposing him to be praising her, said: “From graciousness you are saying this, not from my merit. I wish it were what you say, as big as that! I would, because of it, regard myself as being more noble and more greatly valued.

That’s what a man might think upon being told that he had a relatively large penis. Medieval literature figuratively associated a wide vagina with a woman having had sex with many different men. Medieval men preferred, all else equal, women with narrow vaginas. Yet, as sexually subordinate persons, men often have to accept other than what they prefer. The woman in this story misunderstood herself as being measured sexually like men.

Men who believe that merely having a large penis protects them from being cuckolded are fools. Women who believe that their sexual value is measured like men’s are also fools. Modern triggering and making offense is a repressive, inhumane alternative to medieval freedom of expression in discussing sex.

[1] Poggio Bracciolini, Facetiae 244, “The witty saying of a prostitute about Venetians {Facetum Dictum Meretricis Adjocans Venetis},” Latin text from Poggio (1879) vol. 2, pp. 184-5. The quotes above provide my English translations, drawing upon that of id., but tracking the Latin more closely.  The subsequent quote is similarly from id. The Latin text of Poggio’s Facetiae is available online in machine-readable format.

[2] Poggio Bracciolini, Facetiae 180 “About a woman who believed that she was being praised when being told that she had a wide vagina {De Muliere Se Credente Ad Laudem Trahi, Confitendo Latiorem Vulvam Habere},” Latin text from Poggio (1879) vol. 2, pp. 95-6, my translation as above.

Men typically didn’t favor big or wide vaginas. Poggio reported that the Roman Pietro Masini, perhaps after suffering continual cuckolding and years of domestic abuse, willed to his wife only her original dowry. When she complained, he added:

I leave you the most fetid and biggest vagina of any woman in this city.

Facetiae 140 “The testament that an old man made for his wife {Testatio cujusdam senis facta uxori},” Latin text from Poggio (1879) vol. 2, p. 31, my translation as above.

In Poggio, Facetiae 272 “A woman’s amusing response, but one having little respectability {Facetum mulieris responsum, sed parum honestum},” an elderly man who married a widow “discovered that her granary was more ample in size than he expected {percipiens uxoris cellam uberiorem quam putarat}.” He told her that he was unable to fill her barn. She replied that her prior husband filled it well. Latin text from Poggio (1879) vol. 2, p. 228, my translation.

[image] Excerpt from “Freedom of Speech,” an oil on canvas painting by Norman Rockwell, 1943.  It was incorporated into a U.S. government poster that added around the painting, “Save Freedom of Speech / Buy War Bonds.” Source image via Wikimedia Commons.