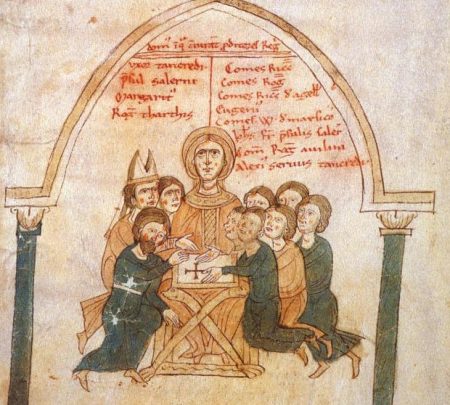 In contrast to gender stereotypes, strong, independent, highly privileged women have governed men throughout history. These women were accustomed to having men do whatever they wished. They understood that men were willing to die fighting on their behalf. They boldly criticized their husbands. With great social sophistication, they used their tears as the ultimate weapon.

When Constance of Hauteville’s husband became King of Germany and the Holy Roman Empire, she became the Holy Roman Empress. In order to uphold her claim to Sicily, her husband engaged in war against Sibylla of Acerra’s husband, who had usurped the crown of Sicily in 1189. Sending Empress Constance away from the fierce men-on-men violence over nominal rule of Sicily, her husband commanded one of his leading men, “Always do what my bride wishes {Facturus semper quod mea nupta velit}.”[1] He probably followed that rule himself.

As many women do, Empress Constance understood that her life was worth more than that of many men. Besieged in Salerno, she opened a window and addressed the attackers:

Hear what my words intend.
At least while we speak, hold back your missiles and your hands.
I will speak few words, but they have great weight.
O people of great faith and wisdom tested to the heights,
you know who I am and who I have been, and that is why I make my complaint to you.
…
If I {sic} am allowed to battle, I still have knights and gold.
I counsel everyone to return to his home.
I have Conrad at Capua, Diepold at Rocca D’Arce;
the one will do his duty as knight, the other lead the commanders.
Darius, as the messenger told me, burns Ebolian fields here
and there shears the Theatine sheep.
But those people of pure faith seek to do my will in the midst of warfare,
willingly prepared to die for me

Queen Sibylla’s husband lacked appreciation for his wife’s sexual preferences and her independent lifestyle. He sent to her the captive Empress Constance, surely their most valuable prisoner. He wrote to Queen Sibylla:

This woman is the noble heir of Roger, the first king.
Her husband causes every land to tremble.
I send her to you, sweet love, my very dearest consort,
for you to keep safely, with a watchful heart.
Be a companion and a keeper, a hostess and an enemy.
Never let her be anywhere without you, if you are wise.
Be in the same house, the same bed at night;
do not let her speak to anyone without you.
One drinking vessel must convey delicacies to both of you.
Now be willing to be greater, now equal, now less.

Generally speaking, a self-respecting husband doesn’t send his wife a woman to be her bed-mate, especially if that woman is an enemy.[2] Queen Sibylla harshly disparaged her husband’s judgment:

What are you doing, oh demented one? Did you send me a companion or an enemy?
…
You take bad advice about the causes of your too-grievous infirmities.
A sickness from the stomach overflows into an idle head.
How badly you give medicine to the other limbs
if you ignore the head!
If the head sickens, can the other limbs be well?
Unless you pull off the head, the other limbs will be wasted.

My dear wife and partner of chaste love,
the message you sent me has strength.

Queen Sibylla’s message unquestionably did have strength, especially in relation to her husband’s courtly self-abasement and yes-dearism.[3]

When medieval women’s words weren’t sufficient to govern men, women could turn to their ultimate weapon: tears. After many men, including her husband and her son, died fighting for her, Queen Sibylla was in a desperate position. She decided to surrender to Empress Constance’s husband:

Therefore, I will do what is safe; I will surrender and pray for pardon,
pouring out tears before the feet of Caesar.
Sobs, tears, groans, sighs, weeping,
these will be my husband and my children and my brother;
they will fight for me, they will plead with the lord for me,
my tears will do more for me than my spears.
Pity can do more than a thousand times a thousand Roman citizens.
Caesar will be won more easily by prayers than by spears.

Women’s tears are astonishingly powerful tools. Queen Sibylla wasn’t killed, as many other men were. She was arrested and held captive with her daughters. When Empress Constance’s husband died, Sibylla was set free. She resumed her privileged life and arranged for her eldest daughter to marry a French count.[4]

Male privilege is a recently constructed myth. Gynocentrism has been reality for millennia.

Pietro da Eboli {Peter of Eboli / Petrus de Ebulo} wrote Liber ad Honorem Augusti  about 1196. Pietro was a learned scholar, perhaps a physician, who came from the town of Eboli near Salerno in Italy. He is also thought to have authored De balneis Puteolanis {On the baths of Puteoli}. Little else is known about him. Hood (2012) pp. 6-9.

Behold the old monster, crime of nature, untimely birth;
Behold, the ape is crowned, repulsive man.
…
Instead of Jove a half-man, instead of great Ceasar a dwarf
you receive as sceptered ruler!
…
Nature, your laughing-stock is reigning now, that foul ape-thing,
that man in the likeness of an aborted corpse!
…
He is poor in morals and in life, not refuted by his Fame,
and he has little masculinity and a short body.

Pietro didn’t use the diminutive name Tancredulus to disparage Tancred. He used the term Tancredulus to caption a painting showing a woman displaying Tancred when he was a baby: “This woman displays little Tancred {Hec ostendit Tancredulum}.” Hood (2016) pp. 116-7. That’s not a disparaging use of Tancredulus. Scholars have continued to propagate the misunderstanding that Pietro disparaged Tancred as Tancredulus. See, e.g. McDougall (2016) p. 209. This mistake seems to go back at least to the 1911 Encyclopaedia Britannica entry for Tancred. Pietro in a variety of ways did express contempt for Tancred’s small stature. See above quote.

[4] The fate of Sibylla’s son William III may have been much worse. While the leading modern study has concluded that William III wasn’t physically mutilated, a variety of medieval sources indicated that he was blinded as punishment for his mother and father’s usurpation. Roger of Hovedon stated that “King William, son of King Tancred, was blinded and castrated {Willelmum regem, filium Tankredi regis, excecavit et ementulavit}.”Chronica, 171, as quoted in Hood (2012) p. 536. Other medieval sources similarly reported castration. Id. n. 585. Castration culture has deep historical roots. Castration was a recognized, practiced punishment of men in medieval Europe.