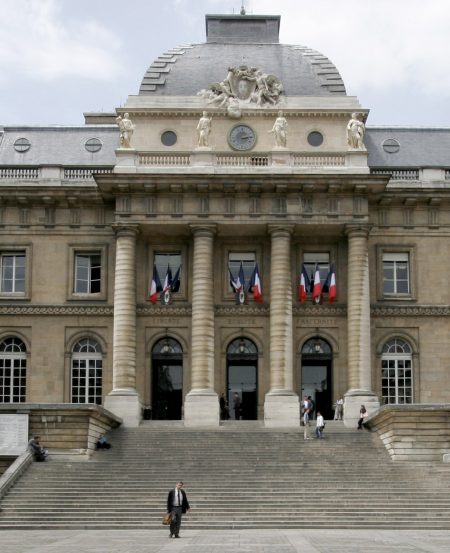 At suppertime in medieval France, Hubert heard a noise after his wife Jehannette had bent over to pick up a pile of sheets. He suspiciously inquired about that noise.

She claimed to know nothing. Then he detected a foul smell. His suspicion confirmed, he accused her of farting. She said that she didn’t do it. Then she turned on him with the hoary proverb: “The one who smelt it, dealt it {Qui premier l’a sentu, l’a faict}.”

The couple became embroiled in a bitter dispute. Hubert insisted that she farted, she dealt it, and he smelled it. Jehannette denied it. She called him a liar. She announced that she would take her husband to family court immediately and make him eat his words if she had to die doing it. Jehannette was a strong, independent woman — the sort of woman that girls today are taught to idealize.

A lawyer quickly appeared to work both sides of the dispute. Wife Jehannette told the lawyer the facts of the case:

I’m picking up a bundle of sheets,
my husband’s rushing me for eats,
I bent down a bit too low,
and something escaped from me, I know,
just so, so help me God!

Jehannette accused her husband of putting her in that position. He was thus charged with “cruel and unusual punishment {peine extraordinaire}.” Husband Hubert stated his defense:

Sir, the truth, truly to tell,
my wife, she farted next to me,
so long, so loud, so lustily
that my own asshole quakes with fear
to recall that fart in her own rear.
Now, sir, I want my house kept free
of filth and smells — clean it should be.
I want repair for all the harm
she’s done to my home and its charm.
That’s all I have to say.

Wife Jehannette countered that it was her husband who farted. She appealed to the lawyer to defend her in court and promised to pay him well. The husband promised to pay the lawyer even more than his wife would pay him. Seizing the opportunity to bill both wife and husband as clients, the lawyer happily took them before the family court judge.

The judge inquired into the underlying theory of the case. The lawyer explained:

Hubert believes and has no doubt
that he’s one substance, all throughout,
with his wife, that the two are one.
But balks, when all is said and done,
at sharing in her farts and piss.

Under the English common-law doctrine of coverture, the husband and wife are one, and the husband is responsible for his wife’s crimes and for his wife’s debts. But this case, heard according to medieval French civil law, concerned the meaning of marital common property. The judge declared:

The husband must know in his heart
that each bit of her he has in part;
for when he took her as his wife,
he took all of her, and for life.

Now, since the alleged fart indeed
came from the asshole that belongs
to you, sir, with its rights and wrongs,
whate’er it brews must be your cup,
whate’er it cooks must be your sup.
Put up with it, is what I say,
and that’s my sentence.
…
Whatever goods you bring
and have between you, as God wills,
you share and share alike. In ills
and blessings all the same.
…
If she should piss or poop, or should
some gust of wind that’s not so good
escape from her, why wouldn’t you
share in its perfume, through and through?
You can’t make us assembled here
think otherwise! It’s writ, it’s clear:
whatever proceeds from that hole —
though left untouched by hand or pole —
as it wafts up to mouth or nose,
and bests the foulest wind that blows —
both married parties must endure.
Abide ye, roses and manure —
that is the way my conscience lies.

As any family lawyer knows, how far the judge will go to favor the woman is difficult to know. This judge didn’t rule that the wife had farted and that she had lied about it. He ruled that marital farts are marital common property. Yet he didn’t go so far as to imprison the husband on the charge that he had forced his wife to pick up a pile of sheets. This judge thus didn’t exacerbate the massive gender protrusion among person incarcerated — about fifteen men per woman among incarcerated persons.

The judge in this medieval French farce about farting was humane and wise.  If more judges followed his example, women and men would have better lives together.

The above story and quotes are from the anonymous medieval French play Farce nouvelle et fort joyeuse du pect a quatre personnaiges {The new and very amusing farce of the fart for four actors}, also known as La farce du pet {The farce of the fart}, or Le Pet {The Fart}. This farce of 300 octosyllabic verses is thought to have been written about 1476. In that year it was performed for the French King Louis XI and King René of Provence. Those two rules, like husband and wife in La farce du pet, were engaged in a bitter dispute. La farce du pet was first published between 1532 and 1547. Its author was probably a member of the Court of the Basoche, a Parisian guild of law clerks. Here’s some bibliography for La farce du pet.

It was perfectly acceptable to pontificate publicly about assholes, farts, piss, shit, and sodomy, so long as no one took the name of the Lord in vain: “Golly gee whillikers, husband, why did you fuck me up the ass?”

Id. p. 33. That description draws upon conventional medieval stereotypes. In reality, persons in medieval Europe had more freedom to take the Lord’s name in vain than persons today have to call feminists mendacious hate-mongers. In related work, Alfie (2013) provides with acute anti-men bias an analysis of women’s farting in thirteen-century poems of Rustico Filippi.

The English quotes above are adapted from the translation of King (2011). I’ve adapted the quotes from King’s translation to follow the French source more closely and to be easier for non-specialists to read. Enders (2011) pp. 65-85 is an alternate, more colloquial prose “adapted translation” (id. p. 33) that in overall sense follows the French text more close. The quoted French text is from Tissier (1996) pp. 21-63, simplified to not indicate editorial insertions. Viollet-le-Duc (1854), pp. 94-110, provides a quite good French text freely available online.

[image] Palace of Justice in Paris, view from the Cour du Mai. Source image thanks to Nitot and Wikimedia Commons.