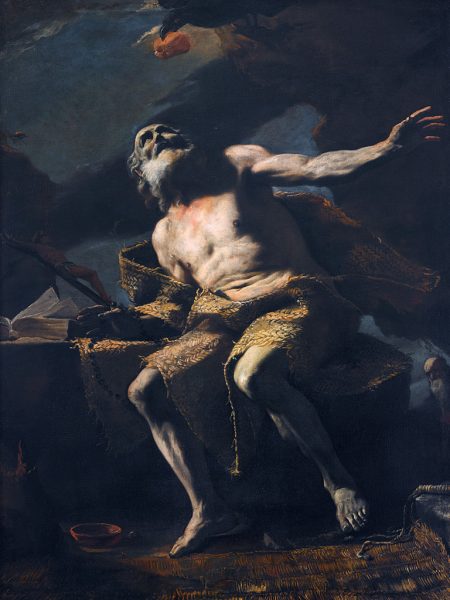 According to badly reported data from the expert U.S. government health agency’s national survey, women raping men has a higher incidence than men raping women. The issue of men getting raped has been suppressed through a culture of denial, ignorance, and gynocentric malice toward men. Many persons don’t even understand that women can rape men. Yet the learned and highly honored Saint Jerome, in his widely read Life of Paul the First Hermit {Vita Pauli primi eremitae}, explicitly and realistically described a woman raping a man. Jerome’s account of a women raping a man has been suppressed in translation, badly interpreted, and largely ignored. That deplorable blindness and dumbness of our Dark Age ends right now in your reading of this post.

To characterize the oppression of Christians under Roman Emperors in the middle of the third century, Jerome described two men martyrs. One was tortured with burning-hot racks and plates. When he survived those, his body was smeared with honey and tied down flat in the blazing sun. Flies swarmed upon him and ate him alive. This man suffered martyrdom through being subject to horrible bodily pain.

The second man was tortured in way that persons today can scarcely understand. Drawing upon his vast knowledge of non-Christian literature, Jerome described a classical pleasure garden:

The Roman Emperor ordered another martyr in the flower of his youth to be abducted to a most delightful garden. There amid the white lilies and red roses, he was forced to rest on a thick feather bed. Beside him meandered a gently murmuring stream. The wind plucked lightly at the trees’ leaves and produced a soft whisper. Tied down with pleasant garlands so that he was unable to escape, he was left there.

When everyone had gone away, a beautiful prostitute came to him and began to stroke his neck with gentle caresses and, what is improper even to relate, to grope his genitals with her hands. When his body was aroused with lust, this shameless, victorious female assailant lay down on top of him.

That’s raping a man. Jerome understood that women can rape men. You should understand that, too. Like many men who are raped, this man had no one he could turn to for help.

Scholars have obscured this man being raped. Many persons who have read the above passage in the Life of Paul the First Hermit have done so in a widely distributed, bad English translation:

When all had withdrawn from him, a harlot of great beauty drew near and began with voluptuous embrace to throw her arms around his neck, and, wicked even to relate! to handle his person, so that once the lusts of the flesh were roused, she might accomplish her licentious purpose. [2]

The harlot handled “his person“? While a man’s penis is at the center of his earthly being, a man’s person is far more than his penis or his wallet. Moreover, this translation describes the woman’s crime hypothetically and vaguely: “she might accomplish her licentious purpose.” That’s not what the Latin text means. The Latin text makes clear that the woman lay down on top of the man. In addition, the Latin text emphasizes the woman’s aggressive domination of the man. It identifies her as a female victor (victrix). In context, “victorious female assailant” is for that word a reasonable English translation.

The rape victim unjustly blamed himself. He had resisted prior torture with the emotional control of a Stoic. Yet he failed to maintain the bodily tranquility of an Epicurean when involuntarily subject to pleasurable sensations.[3] He felt deeply distraught:

What could the soldier of Christ do, where could he turn? He whom tortures had not defeated was overcome by pleasure.

Men shouldn’t be blamed for their sexual arousal. Having a penis or having an erection shouldn’t be a crime. Women who sexually harass men or rape men commit wrongs or crimes. They deserve blame.

This rape victim resisted to an extraordinary extent. He was a Christian. In the ancient world, Christians were renowned for fearlessness in the face of bodily torments. The pleasure of kissing has long involved mutual play of tongues. With the help of God, this Christian resisted with his tongue:

At last, by divine inspiration, he bit off his tongue and spit it out into her face as she kissed him. And so his feeling of lust was trampled down by the sharp pain that succeeded it.

This Christian knew his bodily self as well as any ancient Greek oracle would advise. Through self-mutilation he prevented himself from being raped any longer.

Jerome’s account of the two men-martyrs displays great learning and literary sophistication. His account is a diptych challenging the influential philosophical schools of Stoicism and Epicureanism. In describing the second man’s resistance, Jerome shows remarkably subtle understanding of human emotion and self-consciousness.

Most importantly, Jerome’s account of the second man-martyr is a more accurate representation of reality than major modern news sources have yet provided. With a little-known website, a man came out about what happened to him when he was a young man:

This time in the car, she grabbed me and I asked her to stop and she looked me straight in the face and said “You will do what I want you to do or I will put your family on the street”. I know that without these people, we are homeless. My Dad’s job was based through these people and we were under their roof. Even though I was already terrified enough, the idea that my sisters and brother would be on the street seemed to be so much worse. So I did what she wanted me to do. Not just that night but for many of nights, weeks and months ahead.

God didn’t inspire this young man to bite off his tongue and spit it at that woman behaving wickedly.[4] Now much older, this man believes that God has acted in his life:

I still think back from time to time and wonder why me? Why did I have to go through this season of my life? Why God would put me through such an awful thing, and I still can’t explain that but I do know that without him, I wouldn’t have overcome it. Without him, I wouldn’t be here today to tell this story.

Social workers have largely failed to take seriously sexual violence against men. The early desert hermits were honored in their day as miracle workers, not social workers.[5] May Paul the First Hermit work the miracle of making everyone today understand the real wrong of women raping men.

[1] Jerome, Life of Paul the First Hermit {Vita Pauli primi eremitae} s. 3, Latin text from Hunink (2002), my English translation, benefiting from that of White (1998). All the subsequent quotes from Vita Pauli primi eremitae, unless otherwise noted, are similarly sourced. Jerome refers to the two Christian martyrs suffering under Roman Emperors Trajan Decius (reigned 249 to 251) and Valerian the Elder (reigned 253 to 260).

In the preface to her translation of Vita Pauli primi eremitae, White disrespectfully refers to Jerome’s “obsession with sex.” White (1998) p. 73. Sex has occurred on earth for more than a billion years. Sex is vitally important. In the fourth century GC, Jerome engaged in vigorous, relatively tolerant public discussion of sex and marriage. Such discussion is sternly policed and firmly constrained in our more oppressive and repressed culture. Institutions of the Catholic Church, the Orthodox Church, the Lutheran Church, and the Anglican Church have appropriately honored Jerome as a father of the Christian Church, an eminent scholar (Doctor of the Church), and a saint.

[2] Jerome, Vita Pauli primi eremitae s. 3, trans. Freemantle (1892). This translation is by far the most the widely disseminated translation online. This translation, with very minor variations, is included in the important, freely available online document collections of the Hermitary and New Advent.

Traditional philology has failed to represent rightly men’s distinctive gender. That compounds the structural injustice of the penis’s image problem.

[3] The Bible critiques Stoics and Epicureans. See e.g. Wisdom 2:1-9, Corinthians 15.32, Philippians 3:19. Jerome’s challenge to these two schools of thought is part of a Christian tradition that continued through the intellectual heights of the Middle Ages. In late-thirteenth-century Italy, Salimbene de Adam, grouping Stoics and Epicureans with the impious, stated:

[4] Tertullian, Apologeticum {Apology} 50, describes an Athenian harlot biting off her tongue and spitting it out into the face of a tyrant who through torture hoped to extract from her the names of her co-conspirators. She thus deliberately silenced herself. In the relatively enlightened fourth century, persons understood that women could rape men. In Jerome’s story of the martyr, the raped man’s loss of his tongue didn’t prevent the crime against him from being publicly understood.

[image] Bird startles Paul the Hermit and makes him fearful. The bird, however, gave Paul bread. Oil on canvas painting made by Mattia Preti, about 1656-1660. Preserved as item 6612 in the Art Gallery of Ontario. Via Wikimedia Commons.