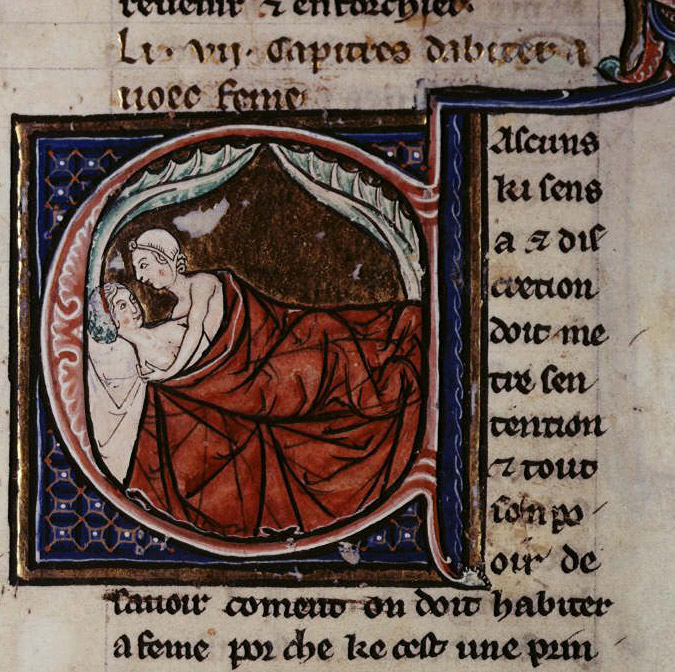 Sex in the age of mechanical reproduction commonly consists of robotic, minutely regulated affairs among persons earnestly trying to convince themselves that they’re alive. How many lovelorn persons desperately stroking their smartphones today even know what it means to have a roll in the hay? Why do they read a massively reproduced instruction book on the joy of sex? Fully alive, flesh-and-blood human beings acted differently in medieval times. Rather than faithfully believing in rape culture, medieval persons regarded sex as natural and pleasing.

Let the young man and virgin woman, both beautiful,
press against each other on the couch in the dark
and hug each other in turn repeatedly,
giving themselves many sweet embraces.

While holding her let the young man
kiss her with cheek close,
caressing her chest and nipples
and her fittingly satisfying little thing.

Thighs to thighs joined,
entering upon the fruit of Love,
let all clamor cease,
and so love be fulfilled.

Late in the twelfth century, a monk at the Catalonian monastery of Santa Maria de Ripoll apparently copied the above poem about two young lovers. These two young lovers didn’t sign a series of formal affirmative consent forms at each step in their amorous relationship. They behaved the way most young women and men yearn to do:

Tenderly I held her legs, without her resisting,
and with her consent caressed her above her thighs.
She didn’t then forbid me to caress her snowy-white breasts,
which to caress was for me extremely sweet.
We went to bed, both our bodies were entwined;
the rest, which she permitted me to take, wasn’t done reluctantly.

Like most men throughout history, this young man didn’t want to rape the young woman that he loved. The young man’s concern for the young woman’s consent contrasts with how she burst into his bedroom without asking permission:

Although I intended to open the closed, latched doors by hand,
a Venus herself burst through while I was separating them.
A beautiful young woman approached via that means
to give me loving kisses in a thousand ways.
Flora was her name, and florid were her deeds.
She bore honey in her throat and spoke honeyed words.

That young man didn’t file a sexual assault charge against the young woman. With generosity of spirit, he delighted in her enthusiastic consent to sex with him.

Medieval young women enthusiastically consented to sex with young men. That was especially so in the spring:

All young persons then
are burning in love;
he seeks her who desires him,
and thus he loves and is loved.

And the young woman aptly
seeks such who is young,
so that in an equal way she wants
only to love and to be loved.

The joy of sex is dissipating amid the opening chasm of sexual totalitarianism. In 2017, a journalist, a Beijing Bureau Chief, had a drunken hook-up with a journalist friend studying Chinese. Months later, piling on to an accusation about a sexual encounter five years earlier, she publicly denounced him. He became a target of online mobbing, his friends turned against him, and he was forced to resign as the president of the Foreign Correspondents’ Club of China. Then his employer, the Los Angeles Times, fired him. All this took place without any thorough, reasoned, multi-sided inquiry into the facts. A subsequent analysis that apparently attempted to be fair nonetheless declared:

Given the millennia during which women have had to take male abuse and suffer under institutionalized denial of and indifference to it, it is perhaps understandable that there is a willingness to shrug off the prospect that some unfairly accused men will become roadkill on the way to a more equitable future. [5]

Earnestly believed, cartoonish stories of oppressors and victims provide foundations for unfathomable cruelty. Why did Stalin’s bureaucratic interrogators regularly stick heated metal rods into men’s anuses? Why did they crush men’s testicles with the toes of their jackboots?[6] Because those Russian men were bourgeoisie, whatever that means, and those Russian men were thus enemies of the working class, an ideological abstraction. A Spanish school teacher recently taught her students that boys should be castrated at birth. Sexual totalitarianism today teaches that men have been oppressors, and women have been victims throughout history.

How in such circumstances can women and men today experience the joy of sex as medieval men and women did? The great ancient poet-philosopher Lucretius provides the answer: women and men must make a true and authentic swerve from dominant delusions. They must live in the day-to-day reality of ordinary life, not in abstract ideology. Women and men today must conceive the vitality of medieval life, especially the imaginative vitality of medieval Latin literature. 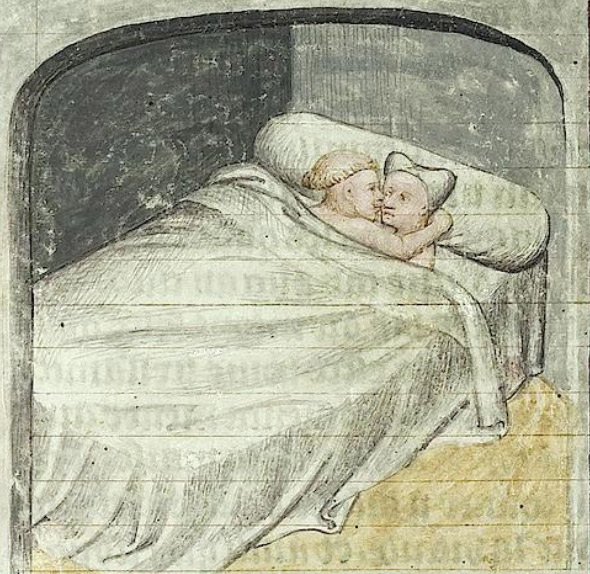 [1] Carmina Rivipullensia 17, titled “De aestate {About summer},” first line “Redit estas cunctis grata {Summer returns promising pleasure to all},” ll. 21-32, Latin text from Stock  (1971) p. 52, my English translation benefiting from those of id. p. 53 and Lazar (1989) p. 255. Here’s an online Latin text. Latin texts of the Ripoll love poems are also available in Raby (1959) pp. 332-40. All the poems of Carmina Rivipullensia are available in the first published edition, d’Olwer (1923), which is freely available online. The leading critical edition is Moralejo (1986), which unfortunately is difficult to acquire.

Carmina Rivipullensia survives in a single manuscript, MS Ripoll 74, now preserved in the Arxiu de la Corona d’Aragó (Barcelona). The twenty-two Latin poems of Carmina Rivipullensia exist in a distinctive scribal hand written on three pages of a tenth-century Liber glossarum held at the monastery of Santa Maria de Ripoll in Catalonia. Based on the script, the songs were apparently written in that book late in the twelfth century. Dronke (1979) argues that Carmina Rivipullensia in MS Ripoll 74 represents an author’s work-in-progress. Traill (2006) convincingly argues that the poems are a copy. Traill suggests that a cleric wrote the love poems in Metz in the Lorraine region of northeastern France, perhaps in 1150 or 1151. A monk at Ripoll then copied those poems into the Ripoll glossary late in the twelfth century when the source book was to be returned to the monastery of St. Victor of Marseille.

[2] Carmina Rivipullensia 4, titled “Quomode prius convenimus {How we first came together in love},” first line “Sol nimium fervens medium dum scandit Olimpi {At noon the hot sun, climbing Mt. Olympus, blazed down excessively},” ll. 17-22, Latin text from Stock (1971) pp. 54-6, my English translation benefiting from those of id. and Lazar (1989) p. 254. On nimium rather than ramium as the second word of the first line, Dronke (1979) p. 23. Dronke interprets this text as a dream encounter, but it seems realistic to me. Id.

The poem’s reference to “the rest {cetera}” associates the poem with Ovid, Amores 1.5.23-4. A twelfth-century Latin love poem commented in conclusion:

But who ignores the “et cetera”?
It surpasses every expectation.

Walter of Châtillon, “Declinante frigore {The winter cold was waning}” (St-Omer 17), ll. 48-9, Latin text from Traill (2013) p. 36, English trans. from Lazar (1989) p. 253. Traill provides the full Latin text and English translation for the poem. An alternate translation of the last line: “The one proclaimed victor was overcome.” Traill (2013) p. 37. On that translation with respect to the proverbial expression “we often see the victor vanquished by the one he has defeated {victorem a victo superari saepe videmus},” id. p. lvi. Cf. Horace, Epistles 2.1.156.

[3] “Sol nimium fervens medium dum scandit Olimpi {At noon the hot sun, climbing Mt. Olympus, blazed down excessively},” ll. 11-6, Latin text from Stock  (1971) p. 54, my English translation benefiting from that of id. p. 55. This song provides a gender-critical perspective on a common figure of ancient Greek and Roman love elegy: “lament outside the door {παρακλαυσίθυρον}” and the “shut-out lover {exclusus amator}.” This gender-critical depiction of a love affair has the added poignancy of being a dream. Although the loving narrator was “deeply wounded by betrayal {alto vulnere lesus}” and had “weary members {pernimium membra},” he still felt the flame of love, especially at noon with a hot sun (ll. 1-7). He generously concludes his song:

I so desire this happy young woman to live across all time,
adding only this: that she live especially for me.

[4] “Redit estas cunctis grata {Summer returns promising pleasure to all},” ll. 13-20, Latin text from Stock  (1971) p. 52, my English translation benefiting from those of id. p. 53 and Lazar (1989) p. 255. The concern here for gender equality in love is similar to that of the Arundel Lyrics. Medieval church doctrine asserted that marriage should be a conjugal partnership of equals, in contrast to the men-abasing ideology of courtly love. This understanding of love expresses the commandment to love like the love between God and humans. See John 13:34, 15:12.

[6] Described by Aleksandr Solzhenitsyn in The Gulag Archipelago, quoted in Morson (2019). Sexual assault against men has been prevalent historically, yet its magnitude today is almost wholly ignored.